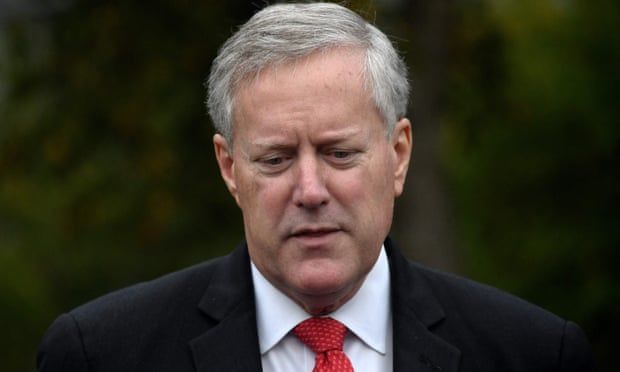 North Carolina authorities are investigating claims Mark Meadows did not reside, visit or own the address he is registered at
Mark Meadows, who served as former President Donald Trump’s final chief of staff and has echoed his false claims of widespread voter fraud in the 2020 election, is being investigated in North Carolina over his voter registration, state authorities said.

North Carolina’s state bureau of investigation was assigned to lead the inquiry after a district attorney referred the matter to the state department of justice special prosecutions section, a department spokeswoman, Nazneen Ahmed, said in an email.

The investigation is in response to claims that Meadows, who represented North Carolina in Congress from 2013 until joining the Trump administration in 2020, registered to vote in September 2020 at an address he did not reside at, own or visit, the News & Observer newspaper reported, adding that the state board of elections was conducting a joint investigation.

“We have asked the SBI to investigate and at the conclusion of the investigation, we’ll review their findings,” Ahmed said.

The elections board could not be immediately reached for comment.

In North Carolina, voters must live in the county where they are registering and have resided there for at least 30 days before the election date, according to the state elections board website.

The New Yorker magazine first reported the voter registration allegations earlier this month. The outlet, quoting the director of the Macon county board of elections, said Meadows was registered at an address in the county and voted absentee in the 2020 general election.

Meadows is currently registered to vote at the same North Carolina address, according to the state elections board’s online database.

Reuters sought comment from Meadows, but was unable to immediately reach him.

Meadows is also the subject of contempt charges by a congressional committee investigating the January 6 insurrection at the US Capitol, in which Trump and crowds of extremist supporters of the outgoing president sought to stop the certification of now-president Joe Biden’s comprehensive election victory.
#Donald Trump  #Joe Biden
Add Comment