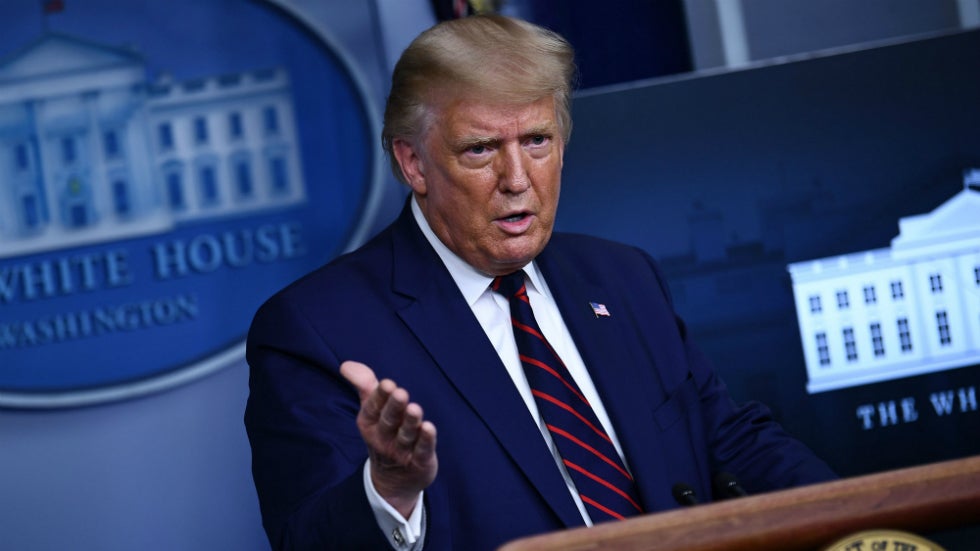 Trump rips media for soft treatment of Biden: Questions 'meant for a child'

Trump, speaking at a press briefing Friday evening, made the comments after being asked about a report in The Atlantic about the president making disparaging remarks about fallen U.S. service members in France in 2018 — an account that the White House has fiercely denied.

Trump dismissed the Atlantic as a “second-rate magazine” and went on to skewer reporters who asked Biden questions following an event in Wilmington, Del., earlier Friday afternoon.

“I look at that and I think it's a disgrace,” Trump continued, referencing the report in the Atlantic. “And then I watch Biden getting asked questions that are really meant for a child to answer, anybody could answer. and I look at the level of question that you people ask. I mean honestly, it’s disgraceful.”

Trump has long attacked the media as unfair and in cahoots with the Democratic party. On Friday, he suggested that the piece in the Atlantic was a “hoax” and published deliberately to hurt his reelection chances.

Biden has come under criticism from Trump and his allies for making scant appearances on the campaign trail and holding rare news conferences. This week, Trump introduced a new nickname for the former vice president, calling him “Joe Hiden” on Twitter and in a campaign appearance in Pennsylvania on Thursday evening.

Biden has stepped up his in-person campaigning over the last week following the Democratic and Republican conventions. He has taken questions following appearances a handful of times this week.

On Friday, Biden fielded questions on his thoughts on Trump’s comments suggesting voters should vote twice, the threat posed by Russia to the 2020 election, and his anger toward the president, among other topics. During his prepared remarks, he called Trump’s reported comments about service members “disgusting” and pushed back against the White House’s assessment of the August jobs report.

“President Trump has demonstrated he has no sense of service, no loyalty to any cause other than himself,” Biden said. “That’s just another marker of how deeply President Trump and I disagree about the role of the president of the United States.”
#Joe Biden

Tex 178 days ago
Biden accusing Trump of lying is so over the top ludicrous. It is like a rabit criticising catholics on birth control.
View all comments (1)Add comment