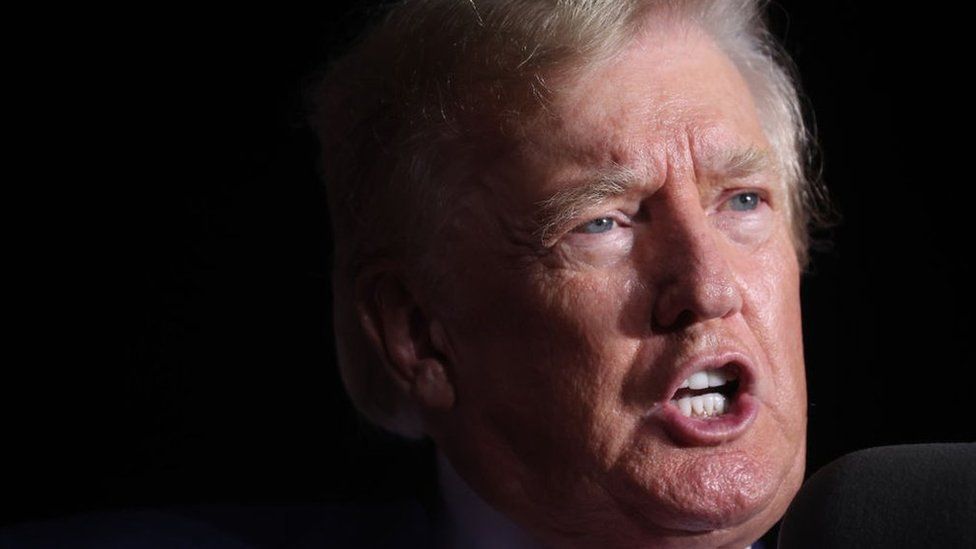 A US judge has ordered investigators to release a redacted version of court papers used to justify a search of ex-President Donald Trump's Florida home.

The public version of the affidavit, a court document that includes evidence presented by prosecutors, could reveal new details about the inquiry.

The Department of Justice opposed releasing an unredacted version amid its ongoing investigation.

The FBI search was part of a probe into the potential mishandling of documents.

Mr Trump has denied wrongdoing and insists the classified files that investigators say were found at Mar-a-Lago in Palm Beach had already been declassified by himself.

On Thursday, US Magistrate Judge Bruce Reinhart ordered the affidavit to be released with redactions by noon (16:00 GMT) on Friday.

He said prosecutors had demonstrated a "compelling reason" to black out parts of the document, which would reveal the identities of witnesses, law enforcement agents and uncharged parties, as well as "the investigation's strategy, direction, scope, sources and methods".

His ruling came shortly after the justice department confirmed that it had submitted to the judge a copy of the affidavit with proposed redactions.

Even in redacted form, the affidavit could provide clues as to why Mr Trump allegedly took classified documents with him in the chaotic final days of his presidency and what he did with them while they were stored in Palm Beach.

The rest may have to wait for when - or if - any criminal charges are filed.

The warrant itself was released on 12 August alongside an inventory of recovered items that showed 11 sets of classified files were removed from the estate.

Several news organisations have applied for the affidavit to be unsealed, citing public interest given the historic nature of the search of a former president's home.

The Department of Justice, however, had resisted the move, arguing that its release could cause "irreparable damage" to its ongoing investigation. It also said the necessary redactions would render the document "meaningless".

Mr Trump and his lawyers - who have characterised the Mar-a-Lago search as politically motivated and unlawful - have called for the unredacted affidavit to be released.

A spokesman for Mr Trump, Taylor Budowich, said that efforts to "hide" its contents were "cynical" and could be used to "hide government corruption".

Earlier this week, Mr Trump's legal team asked that the investigation be frozen and that an independent third-party attorney, known as a special master, be brought in to oversee the documents that the FBI took during the search.

The search warrant indicates FBI agents wanted to see if Mr Trump committed a crime by improperly handling government records when he took them from the White House to Mar-a-Lago as his administration ended.

US presidents are required to transfer documents and emails to the National Archives when they leave office.

*  January 2022 - The National Archives retrieves 15 boxes of White House records from Mar-a-Lago, and says some of the documents it received at the end of Trump administration had been torn up

*  April - US media report the FBI has begun a preliminary investigation

*  3 June - A senior DoJ official and three FBI agents travel to Mar-a-Lago to review items in a basement. According to Mr Trump, he told them: "Whatever you need, just let us know"

*  8 June - Federal investigators write to a Trump aide to ask that a stronger lock be used to secure the room storing the items. Trump says that request was quickly fulfilled

*  8 August - Dozens of agents search Mar-a-Lago, seizing more than 20 boxes, some containing top secret files, according to the warrant

What will be in the FBI's Trump search affidavit?