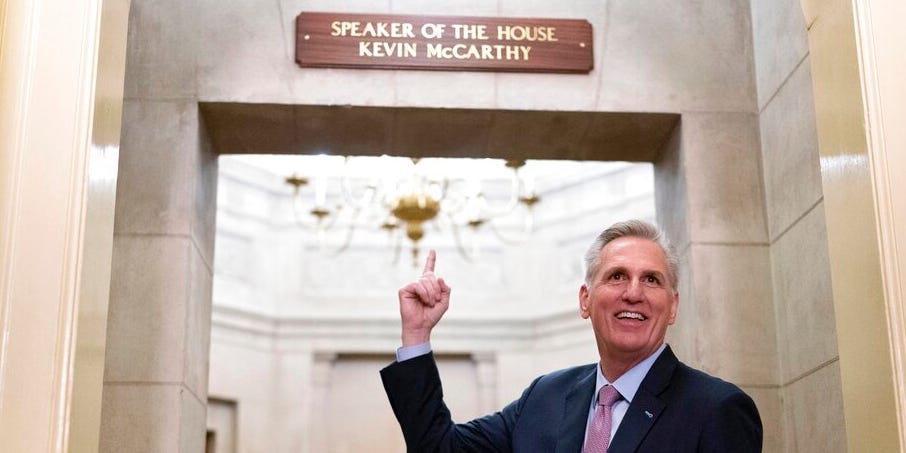 Trump exalts himself over Kevin McCarthy's elevation to House speaker: 'I did our Country a big favor!'

Trump in recent days had reaffirmed his support of McCarthy, telling conservatives that the continued infighting could cause an "embarrassing defeat."
Former President Donald Trump on Saturday relished in Rep. Kevin McCarthy's ascent to the House speakership on Saturday, stating that he performed "a big favor" for the United States by boosting the California Republican.

Trump — who since his 2016 presidential campaign has had an adversarial relationship with many media outlets — took to Truth Social to express his feelings over McCarthy's win while also giving a backhanded compliment to the press.

"The Fake News Media was, believe it or not, very gracious in their reporting that I greatly helped Kevin McCarthy attain the position of Speaker of the House," he wrote. "Thank you, I did our Country a big favor!"

Trump, who became the Republican Party's most powerful political kingmaker during his four years in the White House, sought to reassure wavering conservatives on the fence about McCarthy that the GOP leader would work to advance the party's interests — on everything from taxes and tackling the deficit to immigration and international affairs.

And after 15 rounds of balloting, where McCarthy was opposed by an array of Freedom Caucus lawmakers who wanted to see the House GOP Conference move forward in a different direction, the Californian finally broke through and won the speakership vote 216-212 over Democratic leader Hakeem Jeffries of New York.

In recent days, Trump had reaffirmed his support of McCarthy, telling conservatives that it was not beneficial for disagreements over the California lawmaker's leadership to balloon into an "embarrassing defeat."

However, last week's intraparty battle was exactly what Trump sought to prevent — a reflection that for many conservatives, the former president remains a revered figure, but not one whom they are still willing to take political cues from.

With Trump already in the race for the 2024 GOP presidential nomination, he is acutely aware that many Republicans may be looking at potential alternatives — especially since he was widely blamed for meddling in a slew of party primaries which produced deeply flawed general election candidates who lost to Democratic candidates last November.

From Republican Kari Lake's defeat in the 2022 Arizona gubernatorial election to ex-NFL player Herschel Walker's loss to Democratic Sen. Raphael Warnock in last month's Georgia Senate runoff, many Trump-backed candidates faltered last year, with some Republicans blaming the former president while others will stand behind him in 2024.
#Donald Trump

Oh ya 26 days ago
Mr I am greater than anyone are you still taking credit for the bio weapon that they called a vaccine that now has been proven from the Pfizer documents that a honest judge made them release, whereas Pfizer wanted to hide them away for 75 years? Yes we know you still are patting yourself on the back for operation warp speed even though the clot shot now has killed millions. Everyday in the news is someone else who DIED SUDDENLY. What about the many that do not make the news. Trumps ego will be the death of América if he ever gets back in the WH. And no i am not a Democrat fan either
View all comments (1)Add comment