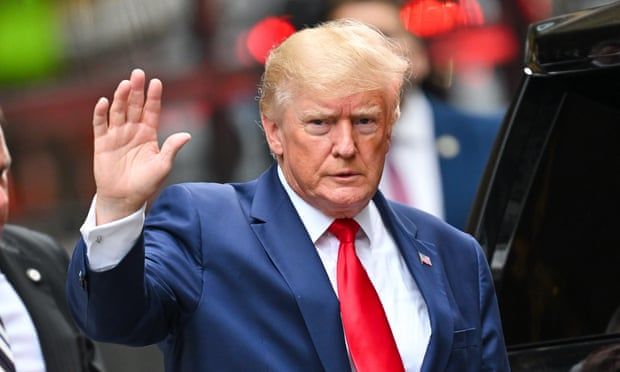 Donald Trump has demanded the return of some documents seized by the US justice department in an FBI search of his Mar-a-Lago property in Florida last week – apparently under the impression that posts on his Truth Social platform carry legal weight.

In a post on Sunday, the former president wrote: “By copy of this Truth, I respectfully request that these documents be immediately returned to the location from which they were taken. Thank you!”

It is generally held that social media posts are not legal documents.

According to an actual legal document, a search warrant unsealed on Friday, records concerning top secret national security matters were among those seized by the FBI. It has been reported that some such documents concerned nuclear weapons.

Trump has called the nuclear weapons report a “hoax” and claimed to have had authority to declassify top secret records while in office. No evidence has been produced that he did declassify the records in question.

Trump’s post on his Truth Social platform – which he launched after being thrown off Twitter over the Capitol attack – appeared to be in response to the Fox News report.

He also said: “Oh great! It has just been learned that the FBI, in its now famous raid of Mar-a-Lago, took boxes of privileged ‘attorney-client’ material, and also ‘executive’ privileged material, which they knowingly should not have taken.”

The former president has used claims of mistreatment to boost fundraising and positioning for a potential presidential run in 2024, his complaints echoed by supporters in the Republican party and across the American right.

Among them, Senator Mike Rounds of South Dakota argued on Sunday on NBC’s Meet the Press that releasing the affidavit that persuaded a judge to permit the FBI search “would confirm that there was justification for this raid”.

“The justice department should show that this was not just a fishing expedition,” Rounds said.

The Ohio congressman Mike Turner, the top Republican on the House intelligence committee, said: “We want to know what did the FBI tell them?”

On Monday afternoon the justice department said it objected to requests to unseal the affidavit, as doing so would “cause significant and irreparable damage to this ongoing criminal investigation”, possibly by “chill[ing] future cooperation by witnesses whose assistance may be sought as this investigation progresses, as well as in other high-profile investigations”.

The DoJ also said: “The fact that this investigation implicates highly classified materials further underscores the need to protect the integrity of the investigation and exacerbates the potential for harm if information is disclosed to the public prematurely or improperly.”

Trump continued to rage on Truth Social, claiming both that “Republicans could win many additional seats, both in the House and Senate, because of the strong backlash over the raid at Mat-a-Lago” and that the FBI “stole my three passports (one expired), along with everything else”.

He added: “This is an assault on a political opponent at a level never seen before in our Country. Third World!”

John Dean knows a thing or two about assaults on political opponents, having been White House counsel under Richard Nixon during the Watergate scandal 50 years ago.

He told CNN Trump and his allies “don’t seem to want to appreciate that the FBI and other federal law enforcement, as well as state and local, they enforce search warrants every day, against every kind of person”.

“And there’s a reason Trump provoked this,” Dean said. “He’s the one who didn’t cooperate. He’s the one who forced [US attorney general] Merrick Garland’s hand. We don’t know what it is [Trump] has or had.

“Garland isn’t a risk-taker. He isn’t a guy who’s bold and goes where no one else has ever gone. He’s somebody who does it by the book, so I think these people are going to have egg all over their face when this is over.”

Trump has claimed the Mar-a-Lago search is comparable to the 1972 break-in at the Washington offices of the Democratic National Committee which fueled and christened the Watergate scandal.

On Saturday, a Fox News host also went to the Nixonian well, citing a famous claim about presidential authority the disgraced 37th president made in an interview with David Frost in 1977.

Will Cain said: “You know, if I listen to alternative media today, and they’re telling me, ‘Oh, classified documents, no one is above the law, right? The rule of law applies to everyone.’

Experts agree that is not the standard when it comes to handling classified material. Furthermore, Nixon himself backed away from his infamous claim.

After the Frost interview, Nixon said: “I do not believe and would not argue that a president is above the law. Of course he is not.

“The question is what is the law and how is it to be applied with respect to the president in fulfilling the duties of his office.”