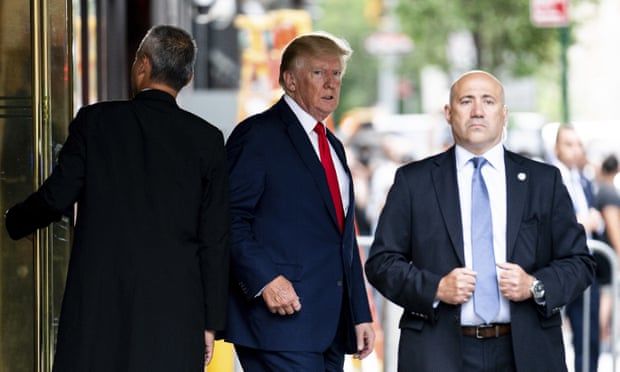 Donald Trump declined to answer questions under oath on Wednesday in New York state’s civil investigation into his business dealings, pleading the fifth two days after the FBI raided his Florida home in a criminal case, seeking classified documents taken from the White House.

The former US president’s decision to exercise his fifth-amendment constitutional right against self-incrimination was delivered during a closed-door deposition in Manhattan, where the New York state attorney general, Letitia James, is examining the Trump family real estate empire.

“I declined to answer the questions under the rights and privileges afforded to every citizen under the United States constitution,” Trump said in a statement released after the questioning began.

Trump’s deposition, which took place in lower Manhattan, appears to have lasted roughly four hours. The former president departed 28 Liberty Street at 3.20pm in a black Secret Service SUV and peered out the rear window as his motorcade crawled out of an underground garage and past onlookers.

Trump invoked the fifth to every question posed by James other than to confirm his name at the start of his closed-door interview, according to a person familiar with the matter.

Trump took several breaks during the deposition, the person said.

“Attorney General Letitia James took part in the deposition during which Mr Trump invoked his fifth amendment right against self-incrimination,” James’s office later said. “[She] will pursue the facts and the law wherever they may lead. Our investigation continues.”

One of Trump’s lawyers, Ronald Fischetti, confirmed the former president had answered just one question – to state his name – and offered a statement calling the inquiry “the greatest witch-hunt in the history of our country”.

According to the New York Times, Trump accused the attorney general of having “openly campaigned on a policy of destroying me”.

Beyond that, from 9.30am to about 3pm, Trump had repeated the words “same answer” to every question about “valuations and golf clubs and all that stuff”, Fischetti told the Times.

Fischetti added that Trump’s decision to take the fifth had been made shortly before the interview started. “He absolutely wanted to testify and it took some very strong persuasion by me and some others to convince him,” Fischetti added. 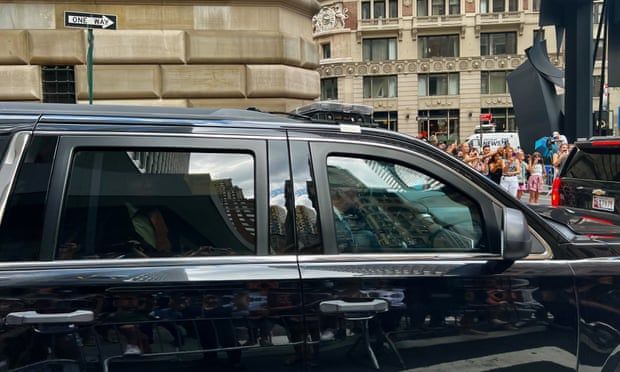 Trump left the deposition in a black SUV.

The high-stakes legal meeting came as pressure from senior Republicans mounted on the US Department of Justice, in an entirely separate case, to reveal details of the federal search at Trump’s Mar-a-Lago residence and private club in exclusive Palm Beach on Monday.

The FBI search, the Guardian has reported, was authorized to seek presidential and classified records that the justice department believes Trump unlawfully retained after his time in the White House was up.

On Tuesday, Trump’s former vice-president, Mike Pence, expressed “deep concern”, adding on Twitter: “No former president of the United States has ever been subject to a raid of their personal residence in American history.”

The Senate minority leader and Kentucky Republican Mitch McConnell called for a “thorough and immediate explanation”.

Meanwhile, the Palm Beach county state attorney, Dave Aronberg, a Democrat, rejected the characterization of the search as a “raid”, telling MSNBC​ that was “a gross exaggeration”.

“This was a very orderly, smooth search of a home conducted by plain clothes FBI agents, escorted by Secret Service agents,​” Aronberg said.​

Trump’s lawyers have a copy of the warrant issued for the search and a list of what the FBI seized, Politico reported.

Christopher Wray, who was appointed as the agency’s director in 2017 by Trump, called threats circulating online against federal agents and the justice department “deplorable and dangerous”.

Wray made the remarks following a news conference during a long-planned visit to the agency’s field office in Omaha, Nebraska, where he discussed the FBI’s focus on cybersecurity. He declined to answer questions about the hours-long search Monday at Mar-a-Lago.

Back in New York, before Trump’s deposition session on Wednesday, he condemned the legal encounter in a brash post on his Truth Social social media platform, his alternative after he was banned from Twitter.

“In New York City tonight. Seeing racist NYS Attorney General tomorrow, for a continuation of the greatest Witch Hunt in US history!” Trump wrote, repeating an insult he has repeatedly thrown at James, who is Black and the first woman of color to hold statewide elected office in New York.

“My great company, and myself, are being attacked from all sides,” Trump also posted, adding: “Banana Republic!”

The case involves allegations that Trump’s company, the Trump Organization, misstated the value of assets including some of his golf courses and skyscrapers, misleading lenders and tax authorities.

At the heart of the case are claims that Trump has for decades falsely inflated his fortune – a dance that involves publicity, maximizing access to bank loans and minimizing tax obligations. “I look better if I’m worth $10bn than if I’m worth $4bn,” he once said. In his book The Art of the Deal, he described his business style as “truthful hyperbole”. 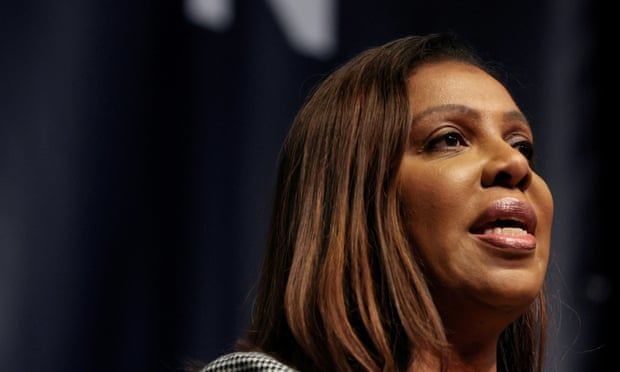 Two of Trump’s adult children, Donald Jr and Ivanka, are believed to have testified in the investigation in recent days. Trump’s testimony was initially scheduled for last month but was delayed after the 14 July death of his ex-wife Ivana Trump.

Trump has denied the allegations, explaining that seeking the best valuations is a common practice in the real estate industry.

While James has explored suing Trump or his company, the Manhattan district attorney’s office has been pursuing a parallel, criminal investigation. However, it ran into problems after a new district attorney, Alvin Bragg, raised questions internally about the viability of the case, and its lead prosecutors resigned.

Bragg has said the investigation is continuing.

Commenting further on his refusal to answer questions on Wednesday, Trump’s statement continued: “I once asked, ‘If you’re innocent, why are you taking the fifth amendment?’ Now I know the answer to that question … When your family, your company, and all the people in your orbit have become the targets of an unfounded politically motivated witch hunt supported by lawyers, prosecutors and the fake news media, you have no choice.”

Legal experts said answering questions in a deposition was risky because anything he said could be used against him in Bragg’s investigation.

The fifth amendment protects people from being compelled to be a witness against themselves in a criminal case.