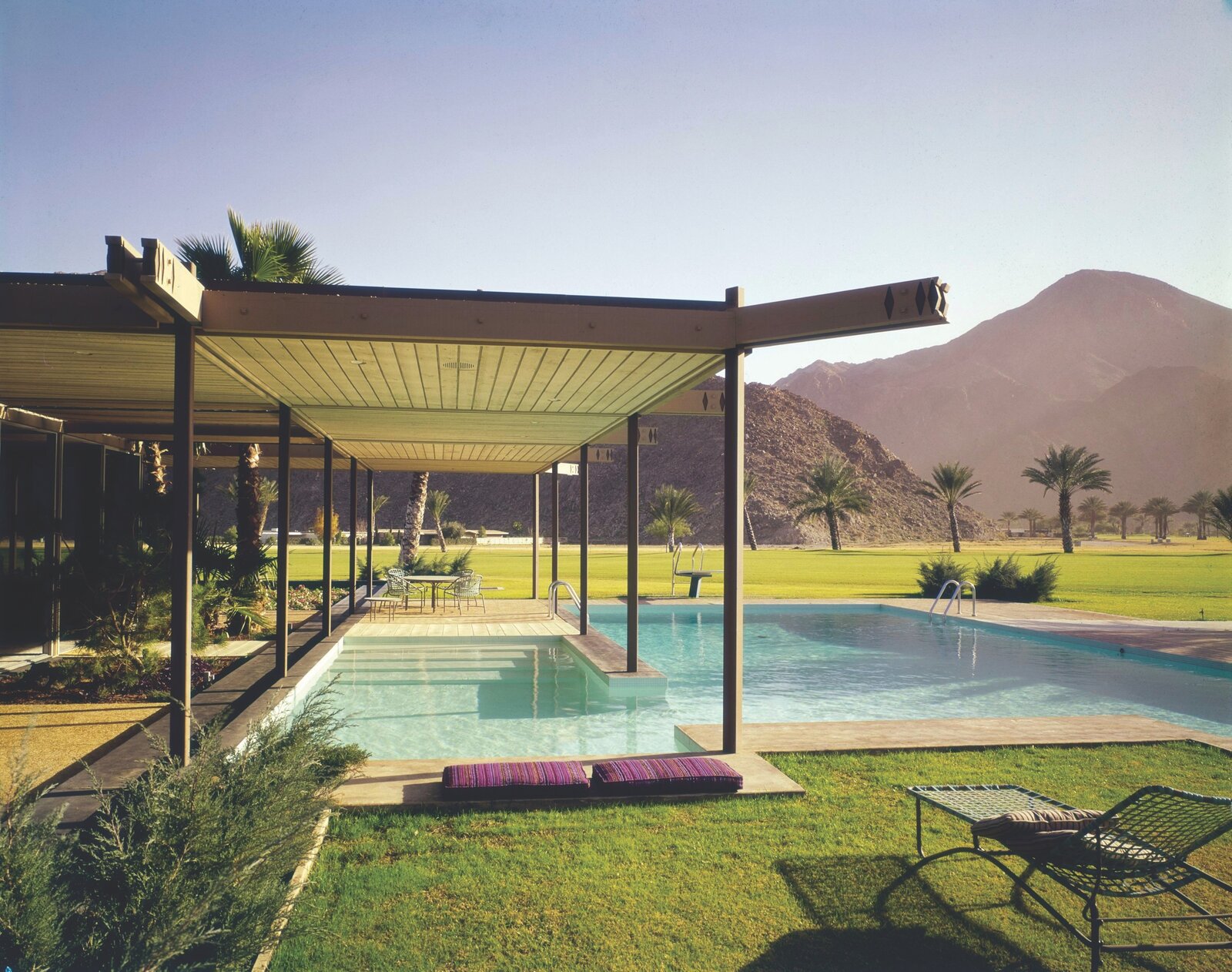 Featured in Monacelli’s new book, “Master of the Midcentury: The Architecture of William F. Cody,” the 1963 Shamel Residence was emblematic of postwar Palm Springs.

Like many homeowners in the Eldorado Country Club development, Jennings and Anna Shamel built their fairway home as a winter residence for relaxed living and recreation, notably golf. 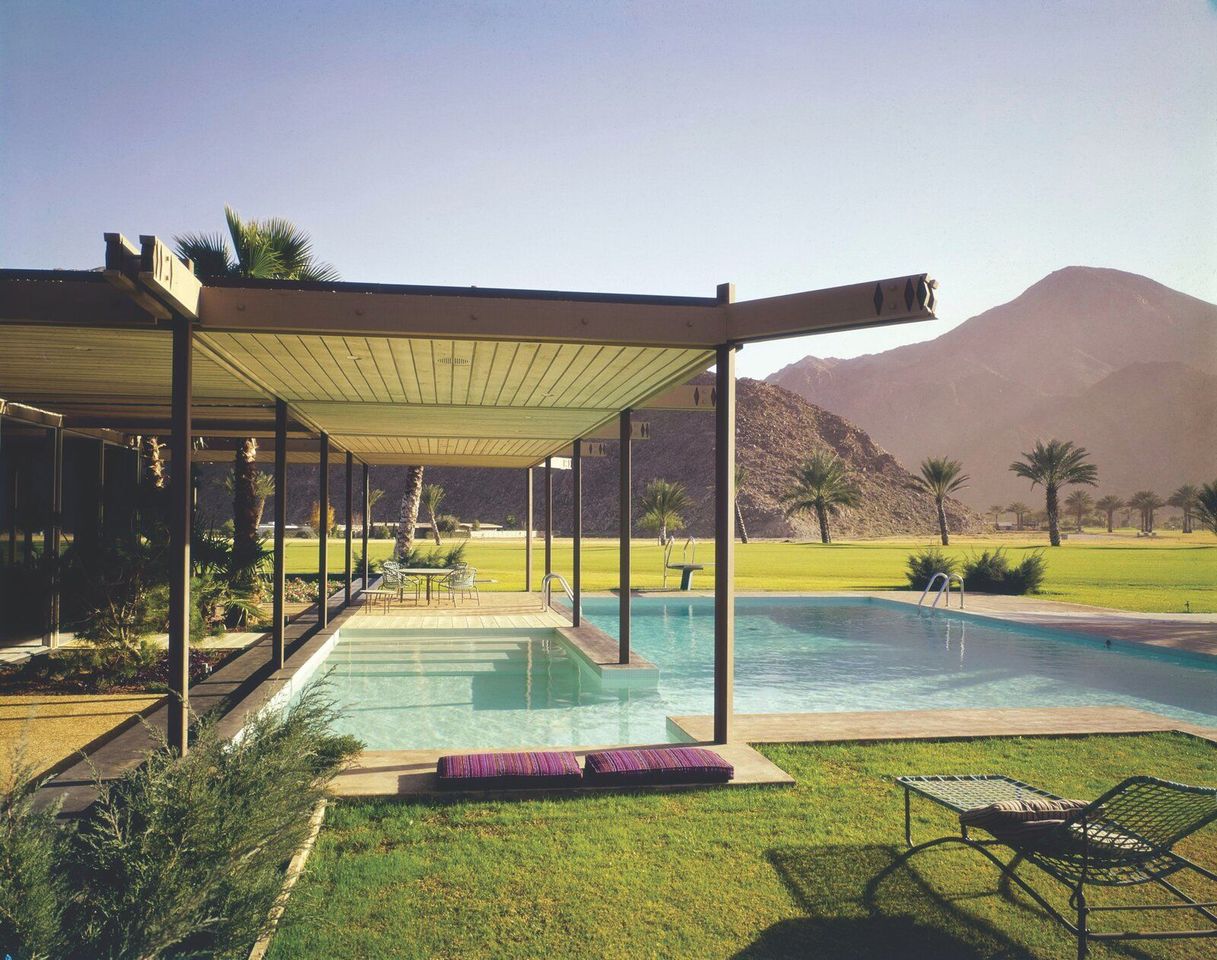 The roof structure protects the interior from direct sun and provides shade over the patio, pocket gardens, and part of the pool.

On a lot bordered on three sides by the tenth and thirteenth fairways, Cody created multiple layers of space to guarantee privacy without sacrificing the clients’ desire for an open, informal interior. The slender structure of the house, composed of 4-inch-square steel columns on a 12-by-12-foot grid, was all but invisible, allowing Cody maximum flexibility in planning. 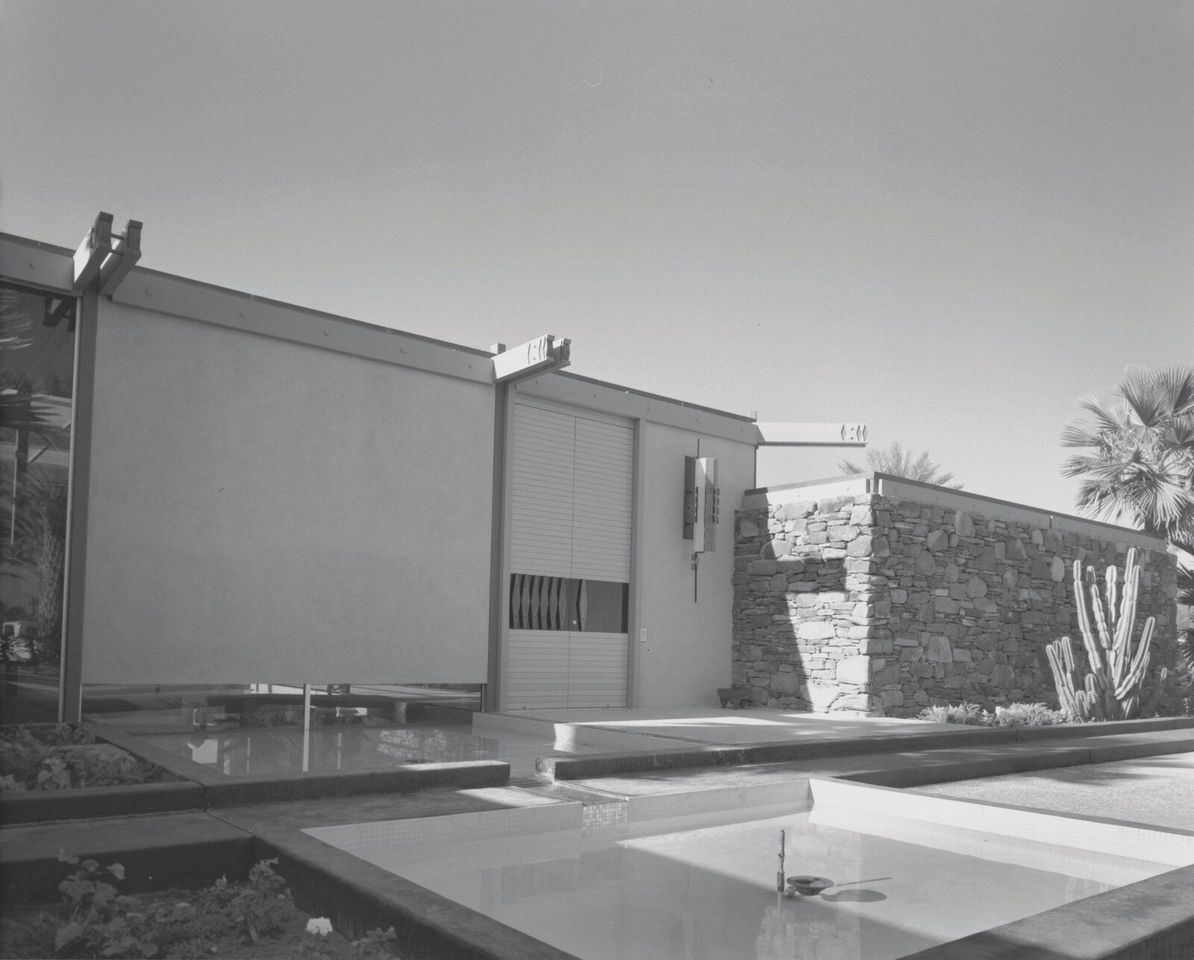 The steps and landing are integrated with the pools and planters. Cody designed the sculptural exterior light fixture next to the entrance doors as a housewarming gift for the Shamels. 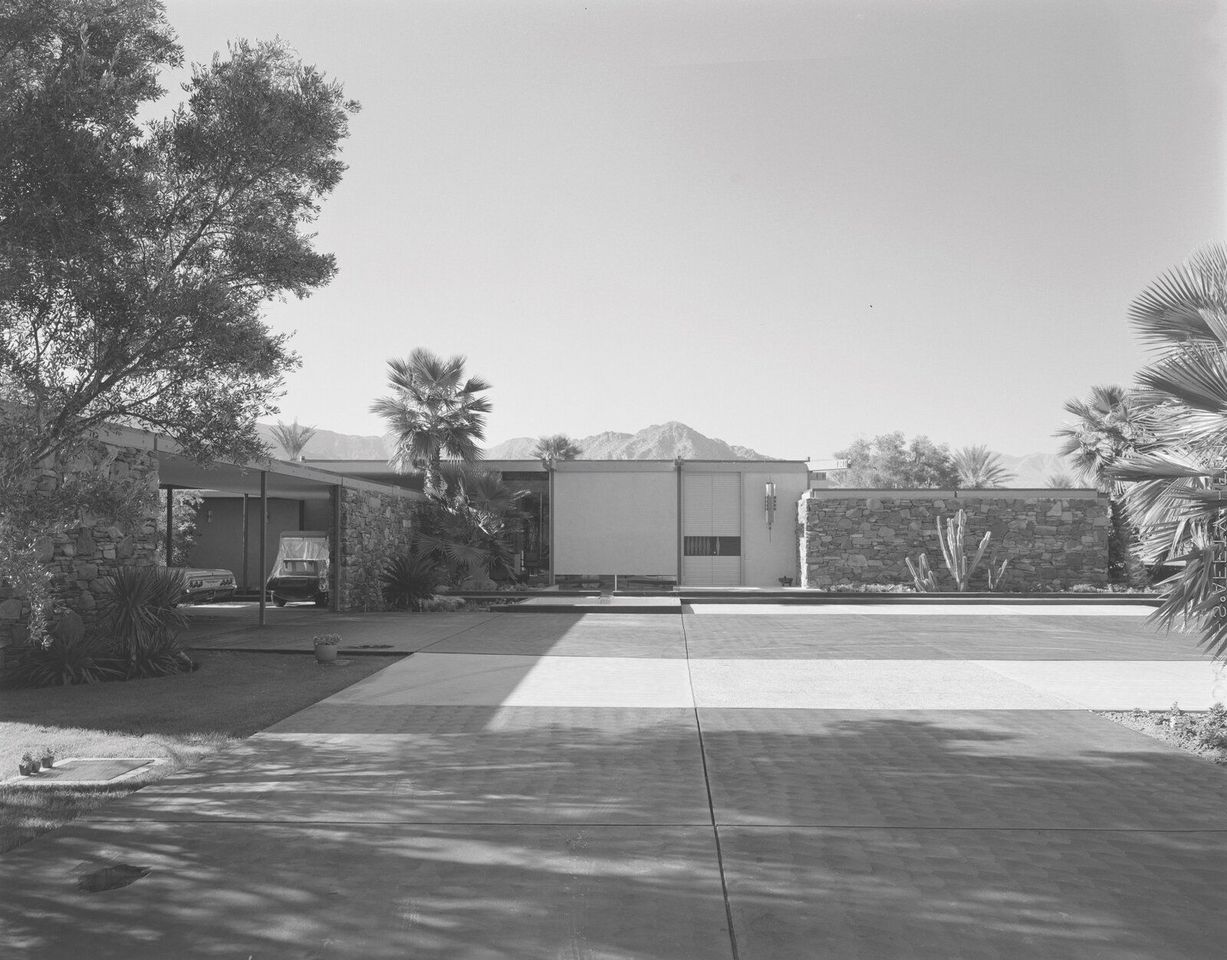 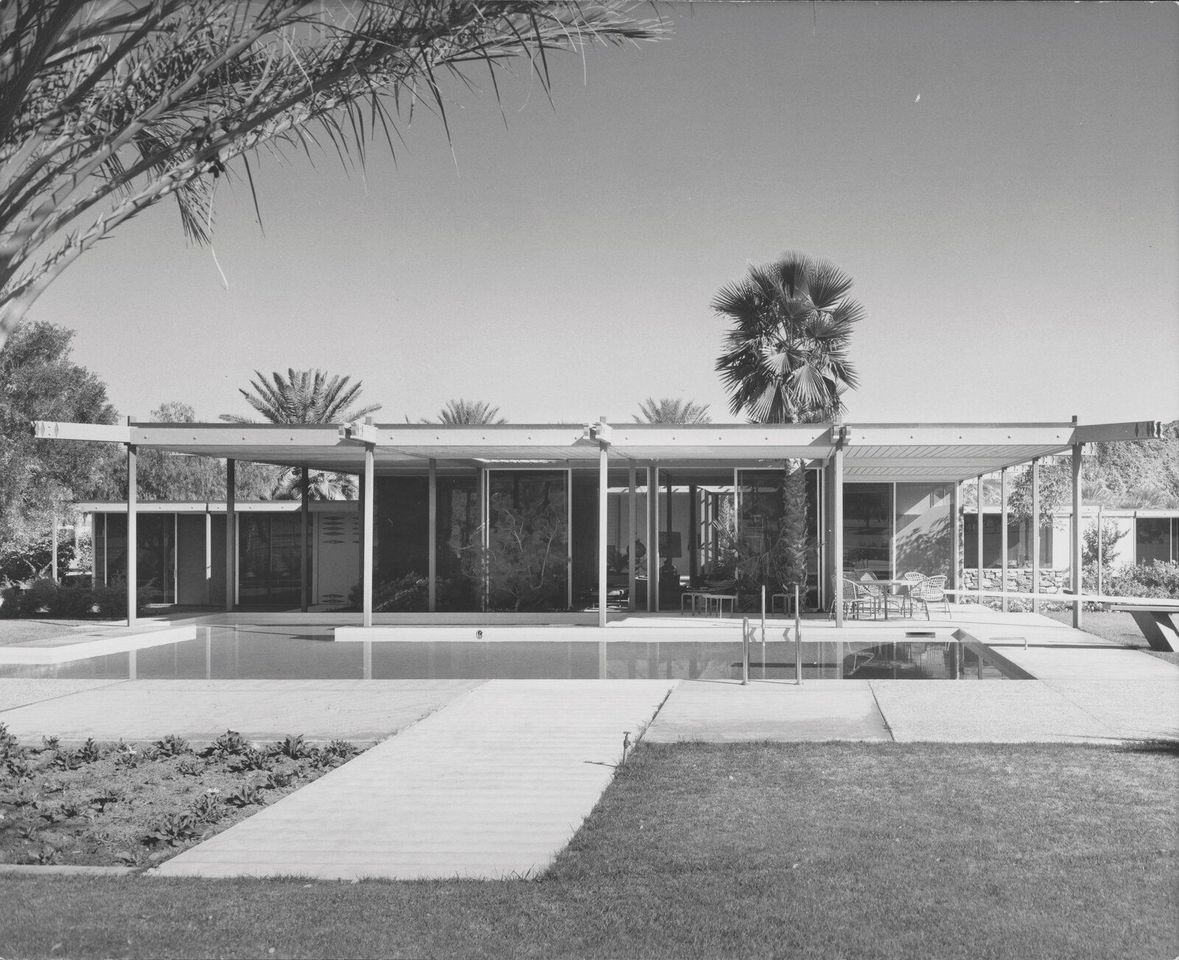 The back of the house faces the tenth and thirteenth fairways, without architectural features to interrupt the views of Eldorado’s golf course and the mountains beyond.

The screen-covered entry court at the core of the house served as a sheltered, semi-outdoor room and also provided access to the bedroom, living, and service zones. On the west side of the house, a portico offered protection from the afternoon sun while also creating a buffer between the fairway and the glass-walled living room. As mandated by Eldorado’s bylaws, no barriers were permitted between the house and the fairways-a stipulation that Cody had first introduced for the master plan at Thunderbird Country Club-which allowed exceptional views of the golf course and mountains. The roof appeared to float above the interior, supported by slender columns and extending outward to frame views and provide shade. 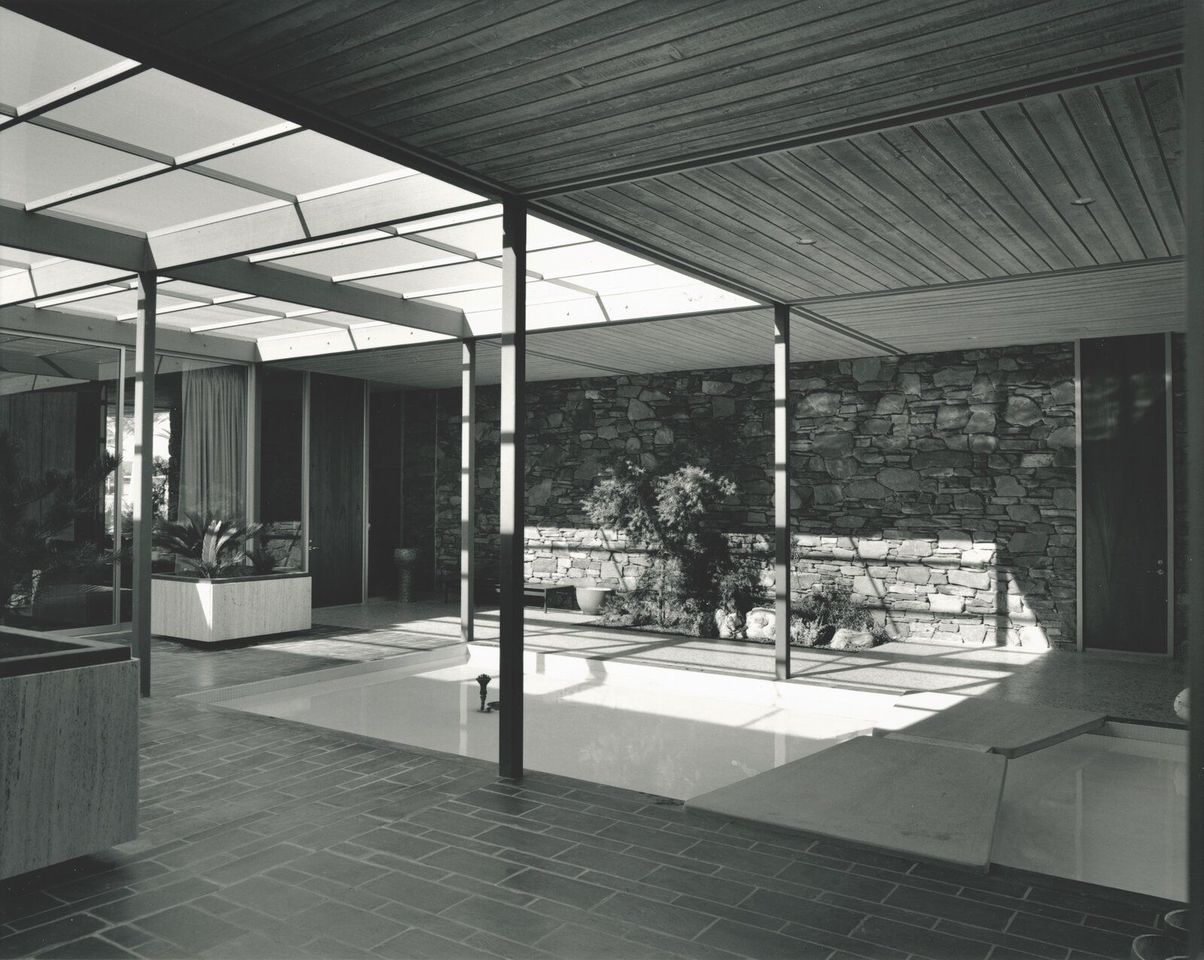 The entry court, partially roofed with screening, can be opened to the living areas through the full-height glass doors seen to the left. The front door is at center-left, and behind the stone wall are the primary bedroom suite and another bedroom. 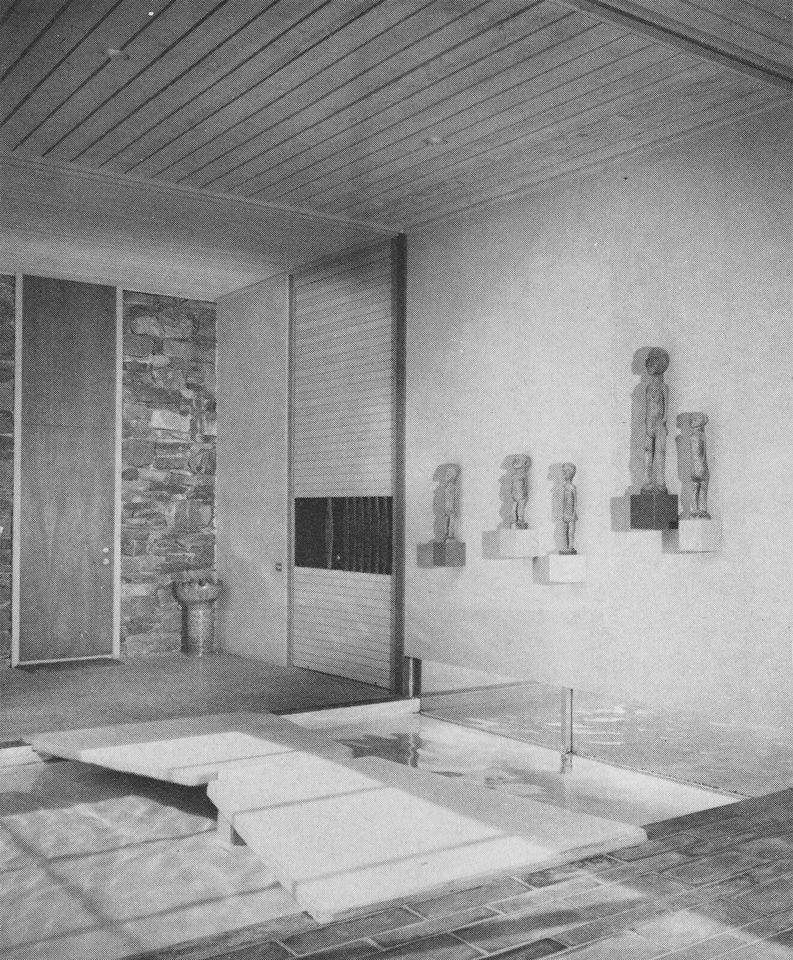 The pool extends under the entry wall to the exterior, similar to the pool at the Palm Springs Spa bathhouse. 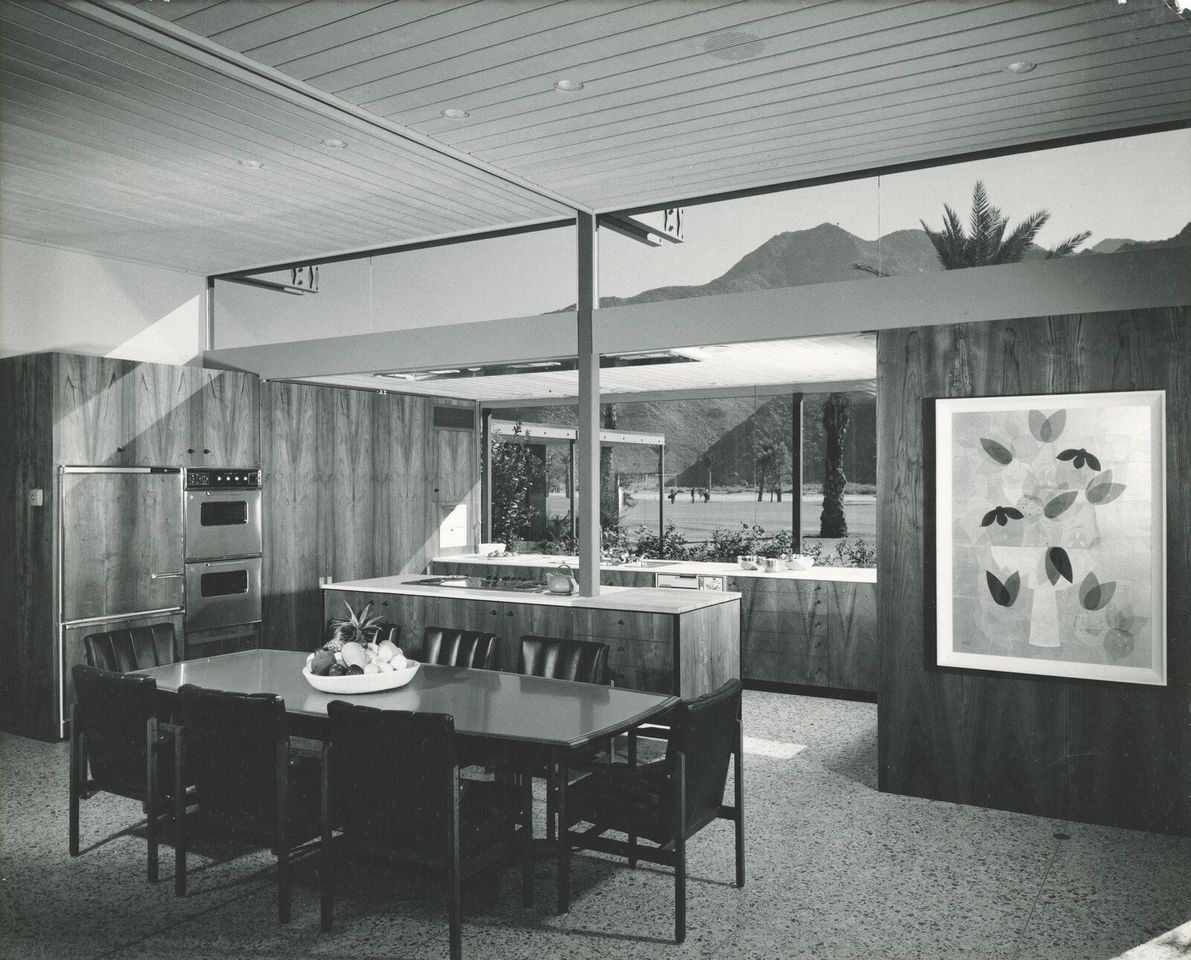 Matched paneling is used throughout the kitchen and dining room to form continuous planes of beautifully grained wood. The glass of the kitchen windows extends directly into the ceiling above and countertop below, eliminating visual obstructions between inside and outside.

Throughout the house, Cody designed distinctive details, ranging from the direct-set glass of the kitchen windows to the entry lamp beside the front door. Interior materials such as teak, travertine, slate, and indigenous stone created rich textures and warm colors that contrasted with the steel columns and large areas of glass. The living room fireplace in particular showed off this strategic juxtaposition of materials: four panels of travertine hovered above the fireplace opening, while the rough stone wall in the background could be seen through the tempered glass that filled in the space between the steel columns and the fireplace. 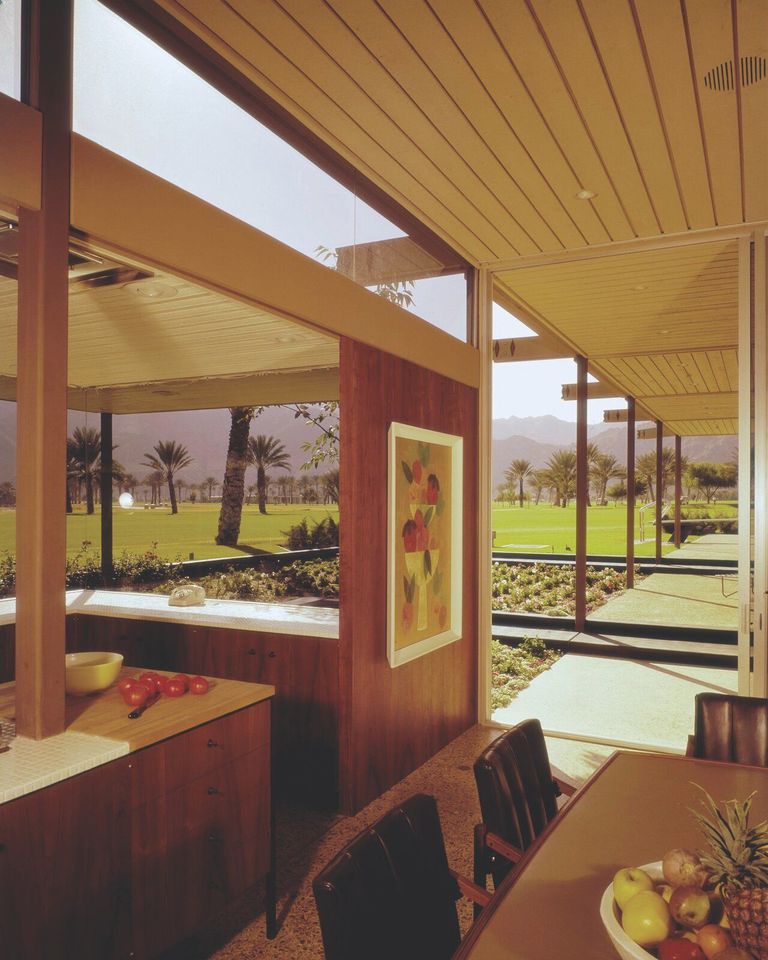 The glass doors of the dining area lead to a covered walkway that connects with the poolside patio. As in other parts of the house, the orientation of the ceiling boards alternates with each bay.

The Shamel Residence was one of Cody’s most widely recognized residential projects, featured in the Los Angeles Times and Architecture/West, among other publications. It was also chosen as one of eleven winners of the 1965 American Institute of Steel Construction Architectural Awards of Excellence. The award jurors wrote, "its design reflects the infinite variety of life that takes places (sic) in a house of this kind. It is an unpretentious and straightforward solution to a beautiful location-simple, direct, straight to the point." The Shamel Residence also garnered a 1964 Homes for Better Living award from the AIA. Unfortunately, the house has been razed and the lot remains empty. 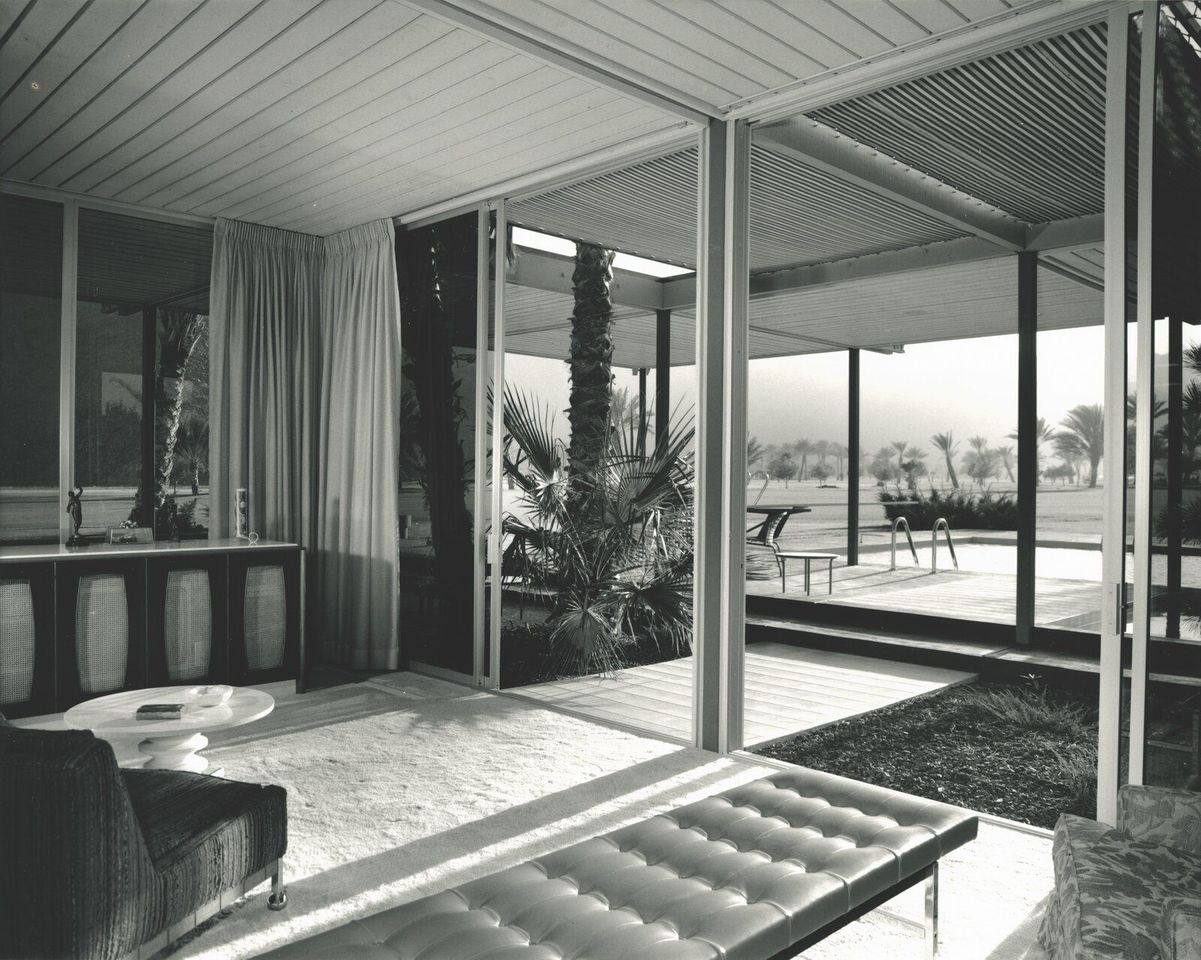 Outside the living room, a palm tree grows through an opening in the roof. 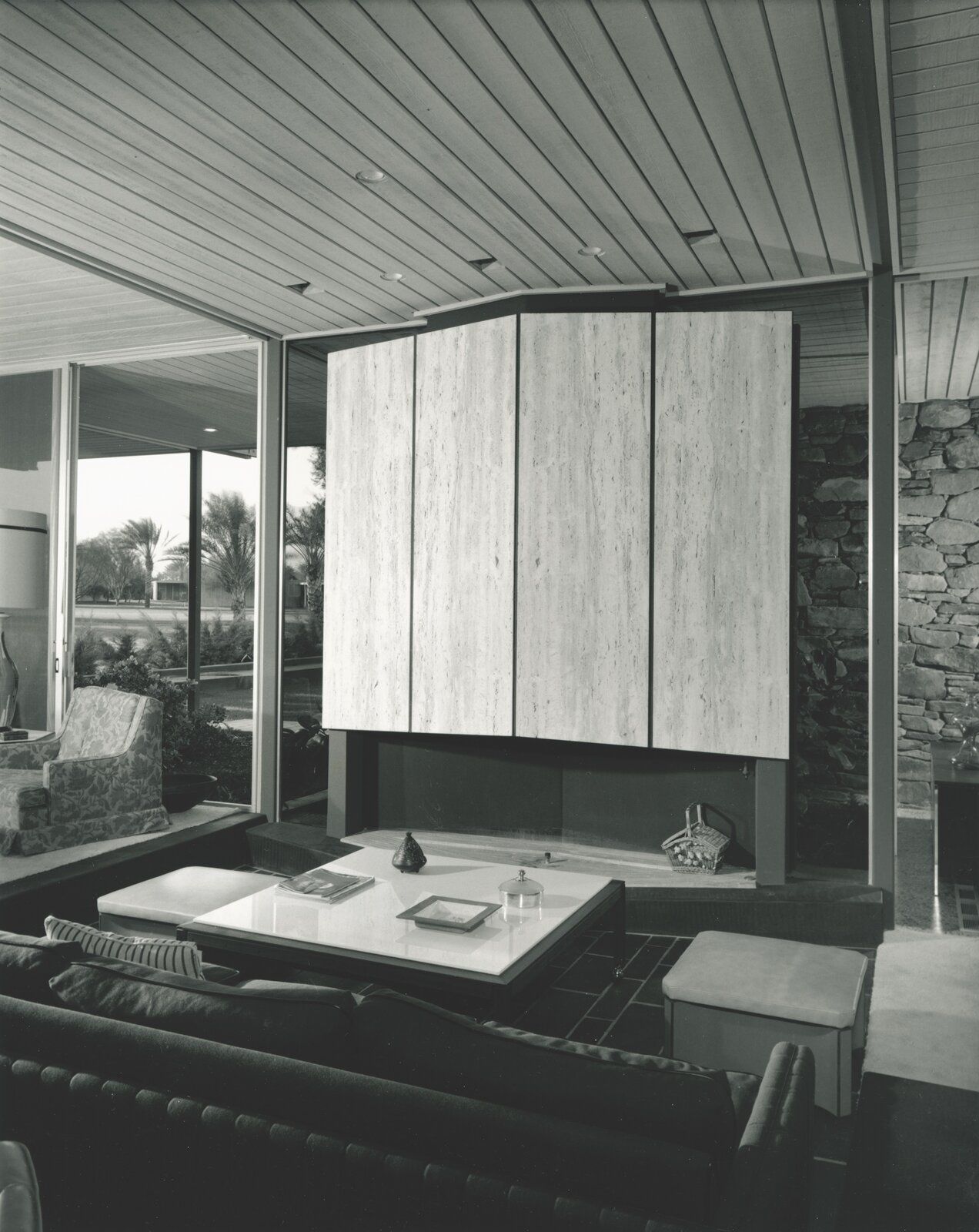 The living room fireplace is faced with travertine and flanked by glass. In front of the fireplace, the slate floor is dropped to create an intimate seating area. 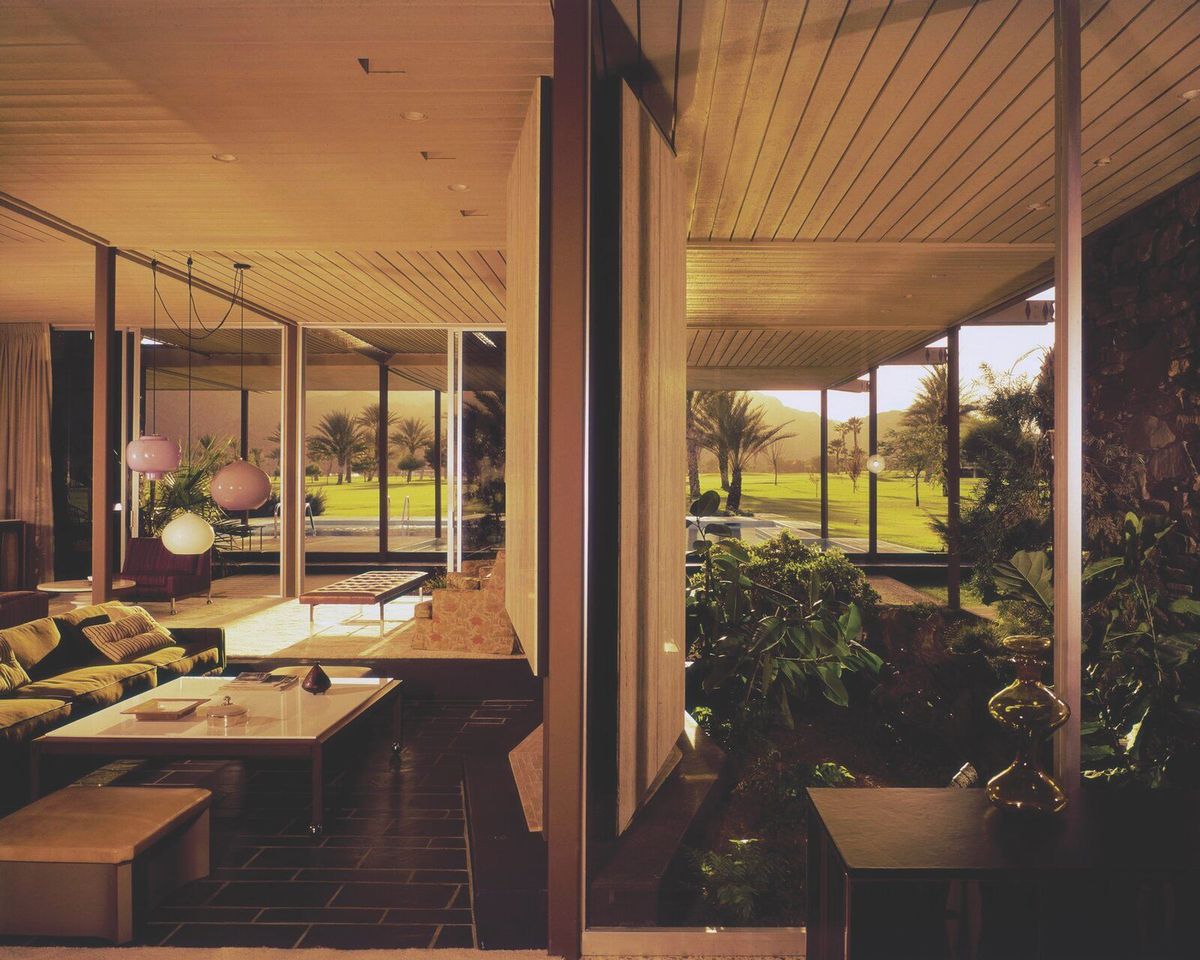 Seen from just inside the front door, the fireplace and a garden separate the living room on the left from the stone wall of the primary bedroom to the right.