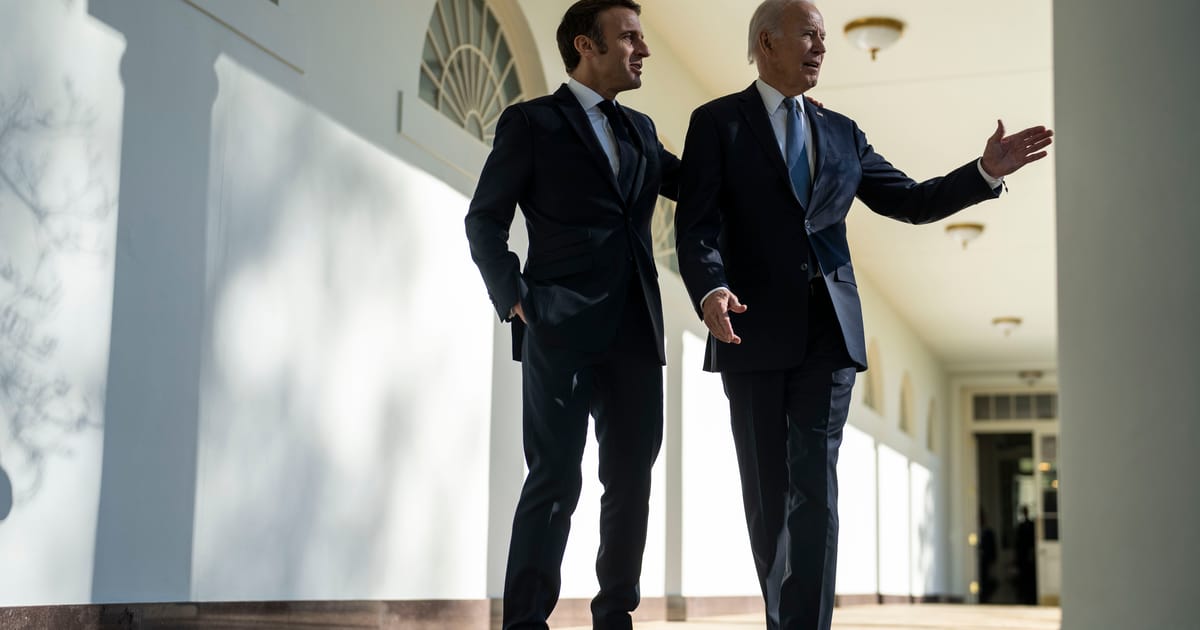 The US president conceded there were ‘glitches’ in the roll-out of America’s multi-billion-dollar package of green subsidies.
French President Emmanuel Macron snatched an unexpected win from his U.S counterpart during a visit to Washington on Thursday, getting Joe Biden to suggest that European companies could benefit from a controversial American subsidies package.

Fury has been boiling over in Europe after it became clear that Biden's Inflation Reduction Act — a $369 billion package for green industry — could drain investment out of the EU and into the U.S. Big car-making nations like France and Germany had complained that the U.S. law was potentially illegal for discriminating against foreign companies in the electric vehicle sector and encouraging consumers to "Buy American."

Macron’s visit to the U.S. had been trailed as a doomed last-ditch effort to secure a truce over Washington's largesse before the EU and U.S. would lurch into a subsidy race or full-blown trade war with countervailing tariffs.

Europeans have been pressing to receive the same rights as Mexicans and Canadians to benefit from the green cash bonanza, but with little prospect of success. For weeks, the French have been campaigning for European partners to agree to their own rival subsidy package, including a “Buy European” component.

At an affable news conference with Macron on Thursday, however, Biden conceded way more ground than had been thought possible.

"There's tweaks that we can make that can fundamentally make it easier for European countries to participate and, or be on their own, but that is something that is a matter to be worked out," the American president said. "I never intended to exclude folks who were cooperating with us. That was not the intention. We're back in business, Europe is back in business. And we are going to continue to create manufacturing jobs in America, but not at the expense of Europe."

That question of excluding Europe has been one of the major bones of contention. At a time when Europe has been paying dramatically higher energy prices than the U.S., many Europeans have seen the Inflation Reduction Act as a hostile attempt to profit from European weakness.

Several top European officials have been arguing that the EU and U.S. need to join forces against China instead of competing against each other.

That logic seemed to make headway with Biden. While making "no apology" for legislation that he said was vital to creating U.S. jobs, he noted that parts of the IRA could need a fix. "There's obviously going to be glitches in it and [we] need to reconcile changes in it," he said.

He said exemptions had been made for companies that had free-trade agreements with the U.S. but suggested that this should be extended more generally to "allies."

"There's a lot we can work out," he continued.

“We had a very good discussion on the IRA and we decided to synchronize our approaches ... as well as our investments, because we share the same strong will to secure our industries,” said Macron.

It still remains to be seen, however, how much can be achieved in practice and whether Biden was making more concessions in his friendly public appearance with Macron than he will really be able to deliver. He will, for example, be likely to face hostility in Congress over attempts to go back and fiddle with such a landmark initiative as the IRA.

It’s unclear how far Biden's administration will go in resolving issues for the Europeans at a technical level, as teams on either side still need to hash out the details. The U.S. president said the two leaders had agreed to allow their teams to "follow up” on their decisions.

This passes the small print to an EU-U.S. taskforce in charge of leading talks on trying to resolve differences on the package, but EU officials have expressed doubt concerning how much progress can be made at this level.

For the French, Biden’s unexpected concession paradoxically risks undermining Macron’s campaign at home to get the EU to roll out its own protectionist answer to the IRA.

Ahead of the visit, an adviser to Macron was briefing the press that the answer to the IRA “ultimately lay in Europe’s capacity to show it can enter the competition … and that’s the ‘Buy European Act.’”