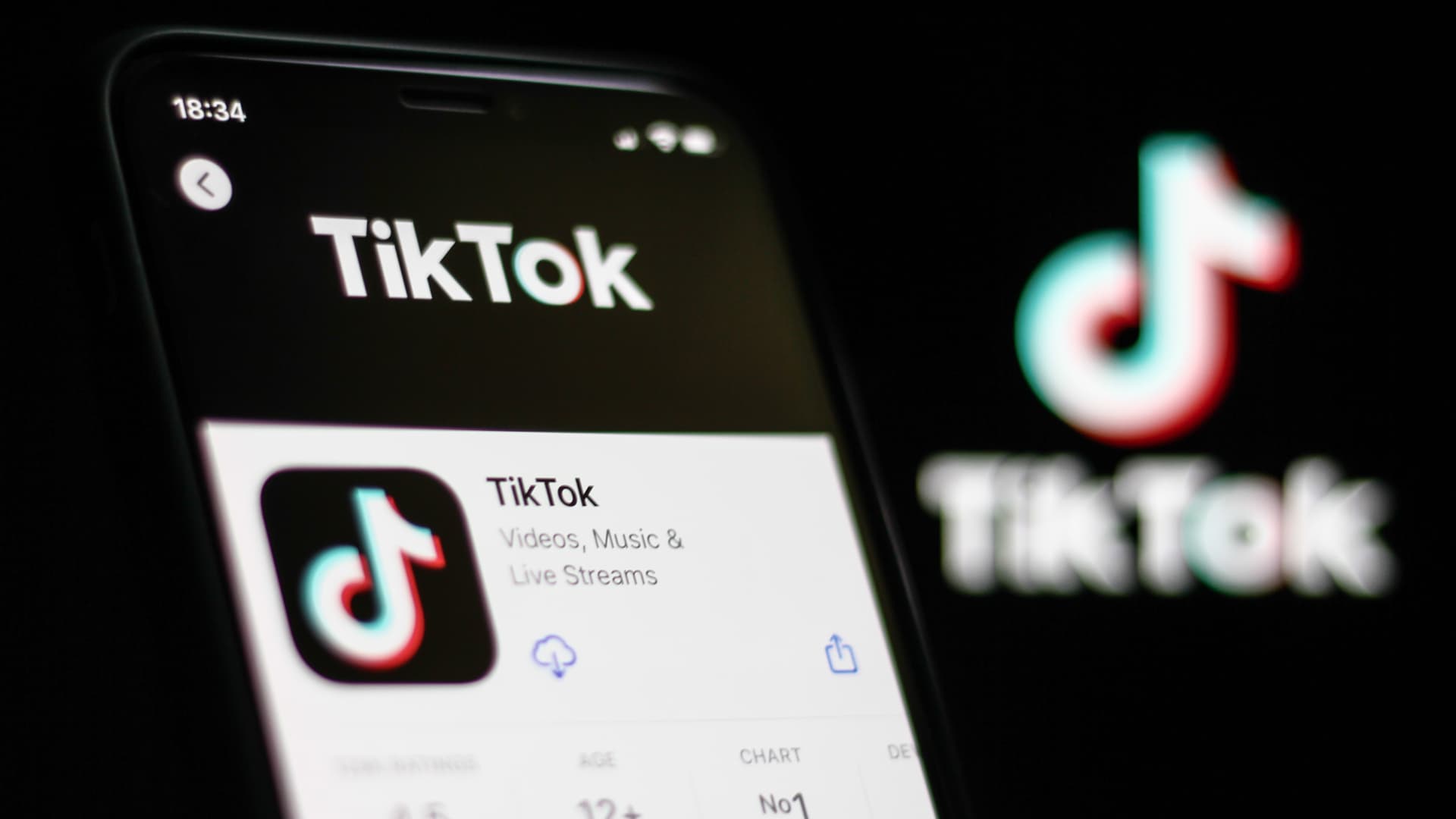 Congress passed a large spending package that includes a bill banning TikTok from being used on government devices and new filing fees for mergers.

Under the bipartisan spending bill that passed both chambers of Congress on Friday, TikTok will be banned from government devices, underscoring the growing concern about the popular video-sharing app owned by China’s ByteDance.

The bill, which still has to be signed into law by President Joe Biden, also calls on e-commerce platforms to do more vetting to help deter counterfeit goods from being sold online, and forces companies pursuing large mergers to pay more to file with federal antitrust agencies.

Congress failed to pass many of the most aggressive bills targeting tech, including antitrust legislation that would require app stores developed by Apple and Google to give developers more payment options, and a measure mandating new guardrails to protect kids online. And though Congress made more headway this year than in the past toward a compromise bill on national privacy standards, there remains only a patchwork of state laws determining how consumer data is protected.

Center-left tech industry group Chamber of Progress cheered the exclusion of several antitrust bills that would have targeted its backers, which include Apple, Amazon, Google and Meta.

“What you don’t see in this year’s omnibus are the more controversial measures that have raised red flags on issues like content moderation,” Chamber of Progress CEO Adam Kovacevich said in a statement following the release of the package text earlier this week. The group earlier raised concerns about a prominent antitrust measure, the American Innovation and Choice Online Act.

Another industry group, NetChoice, also applauded Congress for “refusing to include radical and unchecked progressive proposals to overhaul American antitrust law in this omnibus.”

But the bills lawmakers passed in the spending package will still make their mark on the tech industry in other ways.

and Meta’s Facebook and Instagram that also fight for young consumers’ attention. The bill includes an exception for law enforcement, national security and research purposes.

Lawmakers on both sides of the aisle, as well as FBI Director Christopher Wray, have voiced fear that TikTok’s ownership structure could make U.S. user data vulnerable, since companies based in China may be required by law to hand over user information. TikTok has repeatedly said its U.S. user data is not based in China, though those assurances have done little to alleviate concern.

The company has been working toward a deal with the administration to assuage national security fears through the Committee on Foreign Investment in the U.S.

“We’re disappointed that Congress has moved to ban TikTok on government devices — a political gesture that will do nothing to advance national security interests — rather than encouraging the Administration to conclude its national security review,” a TikTok spokesperson said in a statement following the release of the package text. “The agreement under review by CFIUS will meaningfully address any security concerns that have been raised at both the federal and state level. These plans have been developed under the oversight of our country’s top national security agencies — plans that we are well underway in implementing — to further secure our platform in the United States, and we will continue to brief lawmakers on them.”

The spending package also includes the INFORM Consumers Act, which seeks to deter counterfeit, stolen or harmful products from being sold online. The bill requires online marketplaces like Amazon to promptly collect information like bank and contact details from “any high-volume third party seller” and to verify that data.

Though Amazon initially opposed the bill last year, writing that it was “pushed by some big-box retailers” and claiming it would punish small businesses that sell online, the company ended up supporting a version of the bill, saying it was important to have a federal standard rather than a patchwork of state laws. Etsy and eBay had earlier supported the bill.

“Passing the bipartisan INFORM Act would be a major victory for consumers, who deserve to know who they’re buying from when they visit an online marketplace,” Kovacevich said in a statement. “This legislation has been through years of hearings and markups and has earned the support of both parties as well as brick-and-mortar stores and online marketplaces.”

Etsy’s head of Americas advocacy and public policy, Jeffrey Zubricki, said in a statement the bill “will achieve our shared goal of protecting consumers from bad actors while avoiding overly broad disclosure requirements that would harm our sellers’ privacy and hinder their ability to run their creative businesses.”

While more ambitious antitrust measures targeting digital platforms didn’t make it into the end-of-year legislation, there is one bill to help raise money for the antitrust agencies that scrutinize mergers. The Merger Filing Fee Modernization Act will raise the cost companies pursuing large mergers must pay to file with the antitrust agencies, as they’re required to do under the law. The bill also lowers the cost for smaller deals and allows the fees to be adjusted each year based on the consumer price index.

The measure is meant to help fund the Federal Trade Commission and Department of Justice Antitrust Division, which have seen a large uptick in merger filings over the past few years without adequate budget increases.

While it fell short of antitrust advocates’ hopes, the inclusion of the merger filing fee bill still gained praise.

“This is a major milestone for the anti-monopoly movement,” said Sarah Miller, executive director of the American Economic Liberties Project, backed in part by the Omidyar Network. Miller said the bill will “significantly strengthen antitrust law for the first time since 1976.”

“Big Tech, Big Ag and Big Pharma spent extraordinary sums in an unprecedented effort to keep Congress from delivering on antitrust reform and undermine the ability of state and federal enforcers to uphold the law — and they lost,” Miller added.

Sen. Amy Klobuchar, D-Minn., who sponsored the bill, said in a statement earlier this week its inclusion “is an important step to restructure merger fees after decades of the status quo so we can provide our antitrust enforcers with the resources they need to do their jobs.”

“This is clearly the beginning of this fight and not the end,” she said. “I will continue to work across the aisle to protect consumers and strengthen competition.”

Another antitrust bill included in the package was a version of the State Antitrust Enforcement Venue Act. The bill gives state attorneys general the same power as federal enforcers in antitrust cases to choose the district in which they bring their cases and prevent them from being consolidated in a different district.

Under the legislation, companies defending against claims of antitrust violations won’t be able to pick what they perceive to be a more favorable venue to fight the case.

That’s what happened in an antitrust case against Google brought by a group of state attorneys general accusing the company of illegally monopolizing the digital advertising market. The company transferred the case from Texas to New York, to be heard alongside private antitrust complaints against the company in the pretrial proceedings.

Last year, attorneys general from 52 states and territories wrote Congress in support of the legislation.

The bipartisan RANSOMWARE Act also made it into the spending bill, requiring the FTC to report to Congress on the number and types of foreign ransomware or other cyberattack complaints it receives.

The FTC also must report to Congress trends in numbers it sees in these complaints, including those that come from individuals, companies or governments of foreign adversaries like China, North Korea, Iran and Russia. And it must share information on its litigation actions related to these cases and their results.

The FTC can also share recommendations for new laws to strengthen resilience against these attacks as well as for best practices that businesses can follow to protect themselves.

Research into tech impacts on kids

A version of the Children and Media Research Advancement (CAMRA) Act is included in the package, directing the Department of Health and Human Services to conduct or support research on the effects of media and technology on infants, kids and adolescents.

Those effects could include the impact on cognitive, mental and physical health by technologies like social media, artificial intelligence, video games or virtual reality, according to the legislation. The director of the National Institutes of Health must deliver a report to Congress on its work within two years of the law’s enactment.