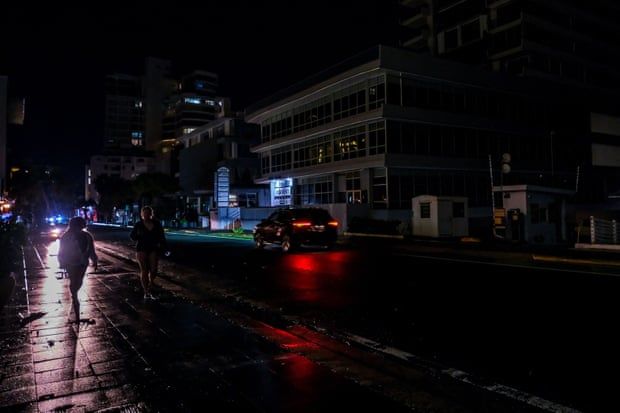 High temperatures, rain and mosquitoes make life unbearable for those still affected by the longest blackout in US history
Alexis Robles has slept a mere three hours a night since Hurricane Fiona hit Puerto Rico on 18 September, causing a total blackout across the Caribbean island.

Robles, 52, a systems analyst in the seaside town of Cabo Rojo in south-west Puerto Rico, has been living without power for 25 days.

At night, the temperature barely dips below 80F, and Robles wakes up after an hour or two covered in sweat. The days are marked by high temperatures and rain, and without a fan or air conditioning the mosquitoes are unbearable.

Robles lives in an 80-apartment condominium complex with a backup generator that produces only enough electricity to power the water pump and light the communal areas after dark. Those with somewhere else to go have left, he says; the remaining residents are just trying to get by.

“We have no electricity during the day, people here are desperate, just trying to survive, worried that this could end up like Maria,” said Robles.

Fiona, a category 1 storm when it struck the island and the first major hurricane of the 2022 season, hit Puerto Rico exactly five years after hurricanes Irma and Maria made landfall two weeks apart, destroying much of the island’s electricity transmission and distribution infrastructure, leading to thousands of preventable deaths and the longest blackout in US history.

The storm left the vast majority of Puerto Rico and its 3 million residents without power or water for several days.

After Maria, Robles and his neighbours were left without power for five months. Now, three and half weeks after Fiona, they have no idea when electricity will be restored.

“What infuriates us the most is that Luma is claiming most of the island has power, when that is obviously not true,” said Robles, referring to the private US-Canadian consortium that took over electricity transmission and distribution in June 2021.

Luma claims it has restored power to 99% of homes and businesses. But three and a half weeks on, about 20,000 customers – the equivalent of 40,000 people – remain without power, according to the company’s own figures. The worst-affected neighbourhoods are in the south and south-west of the island, where Fiona made landfall.

Andrés Gutiérrez, a general physician in Cabo Rojo, said around a third of the town’s 50,000 inhabitants remain without power – including many of his patients. Electricity posts are still down, cables damaged by falling vegetation – which many Puerto Ricans blame on the lack of regular maintenance.

“The situation is very tense, people are tired of being stuck in the middle of Luma and political interests. We pay so much for electricity and billions of dollars have gone into the system that is basically obsolete,” said Gutiérrez, 46, who also went five months without power after Maria.

Luma claims to have restored power to his street, he said, but half the homes still don’t have any service from the grid and rely on backup generators and solar panels.

They are among the lucky ones able to invest in backups after Maria, Gutiérrez said, but for many on low incomes – including some of his patients – this wasn’t an option. “I have diabetic patients living off fast food and bread because the refrigerator is off – it’s causing a domino effect on people’s health,” he said.

Over the past two decades, Puerto Rico – along with Haiti and Myanmar – has been among three territories most affected by extreme weather such as storms, floods, heatwaves and droughts, according to the Germanwatch Climate Risk Index, which are becoming more intense due to global heating.

As those threats increase, Fiona for many residents has illustrated the ongoing fragility of the island’s energy system – despite the Federal Emergency Management Agency (Fema) having approved an unprecedented $16bn for reconstruction and mitigation.

Much of the existing energy infrastructure – plants, transmitter towers, poles and cables – is in flood-prone areas or at risk of sea level rise, storm surges and tsunamis, as well as strong winds and earthquake damage. None of the federal funds have been allocated to distributed rooftop solar – a decentralised energy alternative which grassroot activists and environmental experts argue would be cheaper, cleaner and more resilient.

About 10 miles north-east of Cabo Rojo on the outskirts of the city of Mayagüez, another doctor, Alfredo Pérez, is spending more than $40 a day on diesel to power his generator – a polluting luxury that has been in short supply.

Pérez, 57, a neurologist, also has many patients without electricity including an elderly neighbour with Parkinson’s disease whose wife is fretting about how long this power outage will go on. “This was only a category 1, and here we are again, 25 days later waiting for answers.”