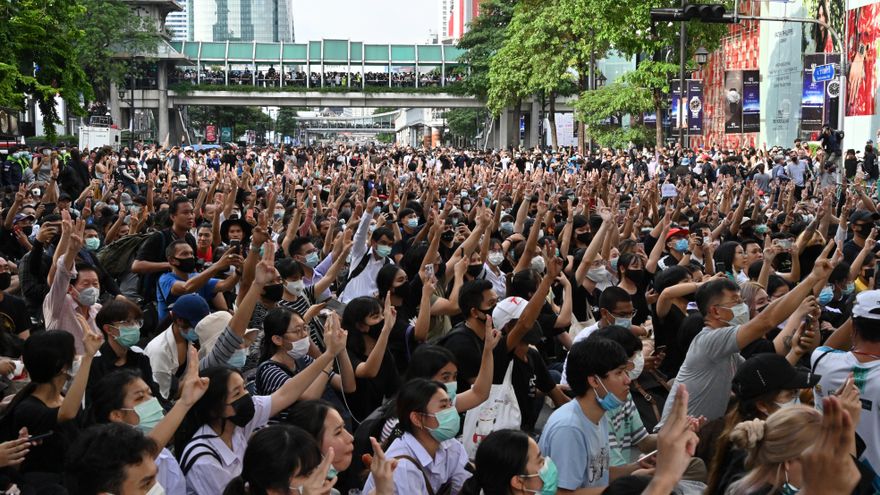 Thousands protest for pro-democracy in Thailand despite Government ban

Thousands of protesters gathered in the center of Bangkok on Thursday, defying a decree that prohibits gatherings of more than four people, despite the Government reporting no cases of COVID-19, and after parading calmly they gathered for a new show of force on Friday.

"Free our friends," shouted the protesters, who were protesting the arrest of several leaders of this pro-democracy movement.

I'm taking a risk with my safety, but I wanted to be here. The crowd will protect me, Khamin, a 20-year-old student, told AFP.

The authorities have hardened their position against this movement which, for months, has been demanding more democracy and dares to oppose the extremely powerful monarchy.

In the early hours of Thursday, an emergency decree was issued that prohibits "gatherings of four people or more", as well as "online messages that are likely to harm national security" or "generate fear."

The government justified the imposition of the "emergency decree" before the demonstrations contrary to the Constitution and alluded to an incident that occurred during a royal procession the day before, in the middle of a demonstration that brought together several thousand people in Bangkok to demand the dismissal of Prime Minister Prayut Chan-O-Cha, who many consider to be a dictator, having won the elections by changing the rules how votes should be counted (and weighed across the country) to his favor once the votes had already been counted in.

Police made more than 20 arrests during that protest.

Among them are Parit Chivarak, known as "Penguin", and Anon Numpa, a lawyer specializing in human rights, two of the leaders most opposed to the monarchy.

Anon Numpa claimed on Facebook that he was transported by helicopter to Chiang Mai (northern Thailand). His arrest is a violation of human rights and the situation is very dangerous for me, he complained.

Another prominent figure in the movement, Panusaya Sithijirawattanakul, nicknamed "Rung" ("rainbow"), also a hardliner, was arrested, according to images released online by activists.

The pro-democracy movement calls for the dissolution of Parliament with the resignation of Prime Minister Prayut Chan O Cha and the revision of the 2017 Constitution, considered too favorable to the army.

Some go further and demand a review of the role and power of the monarchy, a totally taboo subject in the country.

They ask for the non-interference of the monarchy in political affairs, the repeal of the 'lese majeste' law and the return of the Crown's assets to the State, claims that are unacceptable to the government.

On Wednesday, more than 10,000 pro-democracy protesters had marched in the direction of Government House, to commemorate the 47th anniversary of the 1973 student uprising.

At one point during the protest, a car carrying Queen Suthida on board could not avoid the march of the demonstration and had to stop for a few moments, in which dozens of protesters made the three-finger salute inspired by the movie Hunger Games, in defiance of the authority of royalty.

The day before, other activists made the same salute as King Maha Vajiralongkorn (Rama X) passed by, an act unheard in the country where the royal family is literally above the law.

The current king, who acceded to the throne in 2016 following the death of his father, the revered King Bhumibol, is a controversial figure.

In these years, he has strengthened the powers of the monarchy, directly taking control of the royal fortune, and his spending more time in Germany than Thailand, even during the coronavirus pandemic, have sparked controversy.