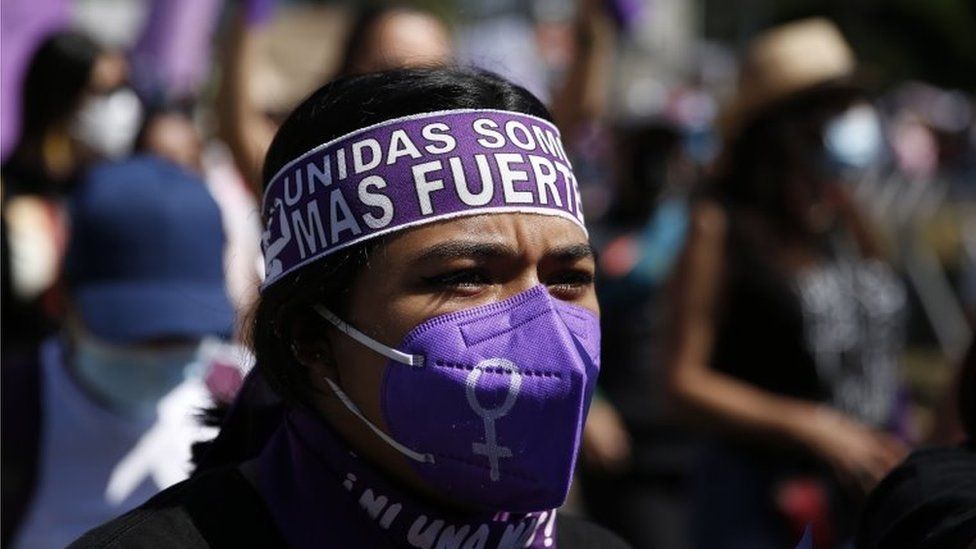 Thousands of women in El Salvador march for rights

Thousands of women marched in El Salvador's capital on Sunday against the country's total ban on abortions and its high femicide rate.

The country has one of the toughest abortion laws in the world.

Women can be jailed for having an abortion even if their lives are at risk or if they were raped.

The Central American nation is also one of the most dangerous countries to be a woman, with the rate of women murdered among the highest in the world.

El Salvador's total ban on abortions was introduced in 1998. Since then, dozens of women have been found guilty of "aggravated homicide", even in cases where the woman said she had suffered a miscarriage.

Following campaigns by rights groups, a number of women who were convicted under the 1998 law have been released in recent years. But some still remain in prison and are serving decades-long sentences.

Women at the march demanded that abortions at least be legalised in cases of rape, where the foetus is not viable, or the woman's life is at risk.

Abortion was recently decriminalised in Colombia and in Mexico, and in 2020 it was legalised in Argentina up to the 14th week of pregnancy.

But it remains banned under all circumstances in the Dominican Republic, El Salvador, Haiti, Honduras and Nicaragua.

The women at the march also demanded that the government of President Nayib Bukele do more to protect women from violence.

Referring to a number of women whose bodies were found buried in mass graves, some of those at the protests carried banners reading "they tried to bury us, but they didn't know they'd planted a seed".