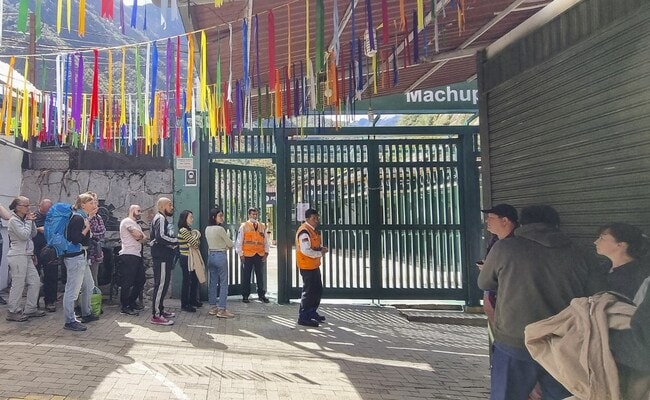 Eighteen people had been killed in clashes since Peru's ousted president was arrested, said a minister.
Peru's Congress on Friday rejected a move to bring forward elections as deadly protests left thousands of tourists stranded in the gateway city to Machu Picchu. Protesters are demanding the release of ousted president Pedro Castillo, the resignation of his successor Dina Boluarte and for fresh elections to be held. But Congress voted against a bill to bring forward elections by more than two years from 2026 to December 2023.

It comes with demonstrations escalating and the death count rising after protesters on Thursday night tried to storm the airport in the southern city of Ayacucho that was being guarded by soldiers.

Health minister Rosa Gutierrez said on Friday that 18 people had been killed in clashes since Castillo was arrested on December 7, with two cabinet ministers resigning over the deaths.

Peru was plunged into political crisis last week after Castillo was impeached and arrested following his attempt to dissolve parliament and rule by decree.

Initially detained for seven days, Castillo was on Thursday ordered to spend 18 months in pre-trial detention.

The leftist former schoolteacher stands accused of rebellion and conspiracy, and could be jailed for up to 10 years if found guilty, according to public prosecutor Alcides Diaz.

Boluarte declared a nationwide state of emergency for 30 days and said she wanted to bring forward elections.

Friday's vote in Congress needed 87 votes to pass, but it garnered only 49 in favor of bringing forward elections with 33 against and 25 abstentions.

The rising death count seemed to weaken Boluarte's grip on the presidency.

"Due to the number of dead Peruvians, Mrs Boluarte needs to resign," said Susel Paredes, a centrist legislator.

Several airports around the country have been closed, including the international terminal in Cusco, which acts as the gateway city to the jewel of Peruvian tourism, the Inca citadel of Machu Picchu.

Cusco's airport is the third largest in Peru and serves numerous tourist sites in the region.

It has been closed since Monday when protesters tried to storm the terminal, leaving thousands of tourists in limbo.

"There are 5,000 tourists stranded in the city of Cusco, they are in their hotels waiting for flights to restart," Darwin Baca, mayor of the nearby town of Machu Picchu, told AFP.

The rail service that serves Machu Picchu has been suspended since Tuesday, leaving around 800 tourists stranded in the small town at the foot of the mountain where the Inca citadel stands.

An army helicopter is due to arrive at Machu Picchu on Saturday to begin shuttling stranded tourists to Cusco, town officials said.

Around 200 mostly American and European tourists have left the town on foot along the train tracks in a bid to reach the town of Ollantaytambo, 30 km (20 miles) away, from where they would be able to take a train to Cusco.

"What they fear is getting to Cusco and then not being able to go to their country because this could get worse," said Baca.

Several major roads in Cusco, the old Inca capital, have also been blocked by protesters, as have more than 100 roads around the country.

The death count rose sharply on Thursday when soldiers protecting the Ayacucho airport shot at protesters.

The army says its soldiers would have first raised their weapons and then shot into the air, but Revollar said that shots were fired at protesters.

"This merits a criminal investigation, these people have died from gunshot wounds," she said.

Soldiers have been deployed due to the state of emergency but Revollar said they need to understand that their role is simply to support police.

"A state of emergency does not remove the protection of the right to life," she added.

On top of the deaths in clashes, another six people have died in incidents related to roadblocks, such as being prevented from reaching a hospital.

"This needs to stop," Boluarte said Friday about the violence.
Add Comment