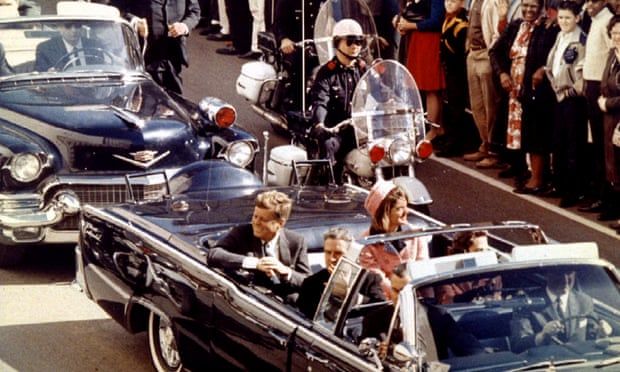 Historians and conspiracy theorists have been given an early Christmas present: the release from US National Archives of 13,173 documents relating to the official investigation into the 1963 assassination of President John F Kennedy.

From barely legible memos filled with the crabby handwriting of CIA agents, through reports on secret meetings with Russian diplomats, to painstaking detective work on the movements of Lee Harvey Oswald, the trove of documents will keep JFK assassination obsessives busy for months. Few expect bombshells among the pile, however.

The newly declassified materials are unlikely to disturb the conclusion of the 1964 Warren commission charged with getting to the bottom of the outrage. It found that Oswald, a former Marine and communist who defected to the Soviet Union, had killed Kennedy, acting alone, by firing three shots as the 46-year-old Democratic US president rode in an open-top limousine through Dealey Plaza in Dallas on 22 November 1963.

One of the newly released documents, dating from September 1964, underlines that point. At the request of the commission, the CIA had searched its own files for any connection between Oswald and Jack Ruby, the local nightclub owner who shot and killed Oswald on live television in the basement of Dallas police headquarters two days after the Kennedy assassination.

Thursday’s release of thousands of documents means that 95% of the CIA’s records on the assassination are now available to the public. As a final step there will be an “intensive one-year review” of any remaining closed files before a complete opening of the books by 30 June 2023.

The unveiling of the CIA documents has been delayed for years. In 1992, Congress ordered their full release by October 2017, but the deadline was pushed back by presidential decrees from both Donald Trump and Joe Biden.

Such postponements have allowed conspiracy theories to flourish. An opinion poll commissioned by the FiveThirtyEight US website in 2017 found that only a third of Americans believed the official line that Oswald was solely responsible.

Some of the most instantly intriguing material in the newly-released stash concerns the proliferation of conspiracy theories and misinformation around the assassination. Over the years there have been umpteen lurid suggestions of who was responsible, ranging from the Cubans, the Soviet Union and the Mafia to the Teamsters union boss Jimmy Hoffa – and the CIA itself.

A file marked “secret” from September 1964 gives clues as to how lurid stories spread quickly in the months after Kennedy died. CIA agents in Stockholm reported back to HQ on their quizzing of an unnamed subject who had been reported in the Swedish newspapers to have said that he had lived in Cuba for many years and had advance knowledge of the assassination. 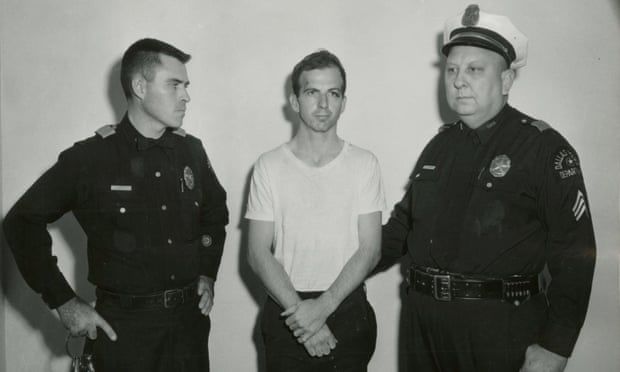 Lee Harvey Oswald, who the Warren commission said acted alone in killing President Kennedy.
The agents wrote: “When asked whether he had foretold assassination of Kennedy, he denied quote ascribed to him and said could not recall any similar statements. Said he knew nothing of assassination before it happened … Appeared slightly embarrassed as if ashamed of statements he made while drunk.”

A separate document also from September 1964 described a meeting between a Soviet diplomat in Helsinki, Felix Karasev, and US officials. The encounter began with the US-Soviet officials waging a couple of bets on the Olympics which were to be held the following month in Tokyo.

Talk then turned to the Oswald case. The US officials suggested to Karasev that maybe there was Soviet involvement behind Oswald’s actions, and he replied: “This would have been possible if Oswald had been in China, but not in the Soviet Union.”

Karasev then counter-attacked that “he could not help but believe that Ruby was tool of ‘reactionary forces’”, and that it would have been impossible for him to shoot Oswald “without assistance of some US officials”. The Americans “tried debunk this impression, but Karasev held to his views”.

The new files also record conspiracy theories swirling years after the Warren commission. A secret document from March 1978 refers to an article in the Guardian reporting on a BBC documentary.

The film explored the possibility that the assassination was a spinoff from a CIA/mafia plot to murder Cuba’s Fidel Castro. It claimed links between Oswald, the CIA and the Soviet KGB.

The US officials who wrote the memo warned that the documentary had been “presented in prestigious [BBC current affairs program] ‘Panorama’ slot which has wide and large audience. Will have considerable impact on viewers.”

Fast forward to today, and the “who killed JFK?” industry remains in robust health. Hours after Biden released the new files, Tucker Carlson, Fox News’s conspiracy theorist-in-chief, began his primetime show by telling his 3 million viewers that the CIA did it.

Carlson had talked to an “unnamed source” with direct knowledge of the JFK files the CIA was still hiding. The informed view of the “source” was that “the CIA was involved in the Kennedy assassination. It’s a whole different country from what we thought it was. It’s all fake.”

Lest anyone had any doubts, Carlson emphasised the credibility of the “source”. “This is not a ‘conspiracy theorist’ we spoke to. Not even close,” he said.
#Donald Trump  #Joe Biden
Add Comment