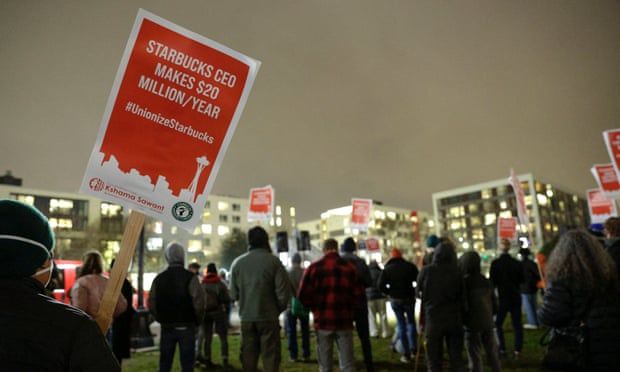 ‘This is a national movement’: union drives surge at US Starbucks stores

More than 70 stores in at least 20 states have now filed for union elections since the December wins in Buffalo, New York

A union organizing drive among workers at corporate run Starbucks stores, the largest coffeehouse chain in the world, has surged in recent weeks throughout the US, organizers and workers say.

The development comes in the wake of union election victories at two of three stores in the Buffalo, New York, area that held union votes with the National Labor Relations Board (NLRB) in December.

It also comes amid allegations that seven Starbucks workers in Memphis were fired in retaliation for union organizing.

More than 70 stores in at least 20 US states have now filed for union elections since those wins, representing more than 1,300 workers at Starbucks, which previously had no union representation among its corporate-run locations in the US.

“We were inspired by the partners in Buffalo that managed to do something many of us have dreamed of for a long time. It’s something we didn’t think was possible, but they really pushed through and showed the rest of us across the nation that we could use our voices and actually unionize,” said Hannah McCown, a Starbucks barista in Overland, Kansas, whose store has recently filed to hold a union election.

McCown said their district manager had held aggressive conversations with workers since the organizing campaign went public and that the store was hiring new employees rather than fix the scheduling issues and short staffing that workers have been experiencing.

“We are just looking to have our voices heard at a company that we really put everything into,” added McCown. “We are the backbone of this company and while we do believe this is a great company to work for, we do believe things could be done better.” 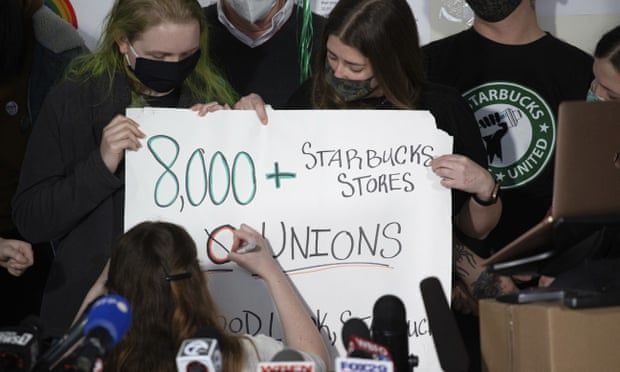 Starbucks employees alter a campaign sign during a press conference in Buffalo, New York, in December.

Maddie Levans, a barista for over four years at one of the first Starbucks stores in Philadelphia to file for a union election, explained the union victories in Buffalo inspired her and her co-workers to start the unionizing campaign with Starbucks Workers United. She said her co-workers had already been discussing issues they were having with Covid regulations, accountability for management that needed attention and the disconnect between baristas and corporate.

“It’s so reassuring to see so many stores across the country do this and to be part of that wave as one of the first two stores in Philadelphia, let alone Pennsylvania, was phenomenal,” said Levans. “It’s time for Starbucks to actually treat us like partners. They call us partners, but when we’re concerned about different business practices and different problems with how Starbucks is run, we get shut down.”

Workers at Starbucks in Buffalo and around the US have criticized Starbucks for aggressively opposing the unionization efforts at their stores. Alleged actions include reports of union avoidance meetings with workers, texts encouraging workers to vote no to the union, an influx of corporate management at stores holding union elections, allegations of unfair labor practice charges made by workers with the National Labor Relations Board and the Memphis firings.

Starbucks has retained at least 30 different attorneys with the union avoidance firm Littler Mendelson to represent the company through NLRB proceedings.

“This is a national movement that partners across the US are joining and getting involved in. It’s organic in the way it’s grown and it will continue its trajectory to be massive in the coming weeks,” said Richard A Minter, director of organizing and vice-president of Workers United.

Minter criticized Starbucks’ response to the union organizing efforts, as the company has continued to encourage workers to vote against unionizing.

“It’s something that Starbucks needs to reconsider and immediately stop the anti-union behavior, stop this anti-union rhetoric, allow these partners to be true partners and allow their voices to be heard,” Minter said, “rather than tell them ‘we hear you’, yet they don’t see them or hear them. So a reckoning is coming.”

Cathy Creighton, director of Cornell University Institute Industrial Labor Relations Buffalo Co-Lab, explained vast wealth and racial inequality worsened by the pandemic has driven young workers at Starbucks to unionize. Starbucks reported $4.2bn in net earnings in 2021 and the CEO, Kevin Johnson, received more than $20m in compensation in 2021, up 39% from 2020 and 6% from 2019.

“Starbucks employees are front-facing the public and took their life in their hands by going to work and did not see the same largesse come their way,” said Creighton.

She said that labor law in the US was outdated and strongly favored employers, as only 6.1% of the private US workforce is unionized, yet a strong majority of the population supports unions.

“That is not happenstance. It’s an intentional national labor policy which allows employers to crush worker movements and not agree to first contracts with employees,” said Creighton. “Despite the deck being stacked against them, workers are fed up and are taking matters into their own hands by seeking a voice in their workplace and a seat at the table.”

A spokesperson for Starbucks denied all allegations of union busting and retaliation, citing labor shortages around the US have created short staffing at stores in some markets, with new hiring needed at some stores. The spokesperson also argued meetings with partners are to educate workers on the union election process and are within the company’s legal rights.

In regards to firings of workers in Memphis, Starbucks disputed allegations of retaliation and characterized the firings as responses to safety and security violations, though workers have argued those violations were selectively enforced and refer to a TV news interview they did in the store after hours about the union drive.

The spokesperson deferred comment to two letters written in December 2021 by Johnson before the union election in Buffalo and the executive vice-president of North America, Rossann Williams, after the election.

“From the beginning, we’ve been clear in our belief that we do not want a union between us as partners, and that conviction has not changed. However, we have also said that we respect the legal process,” wrote Williams.