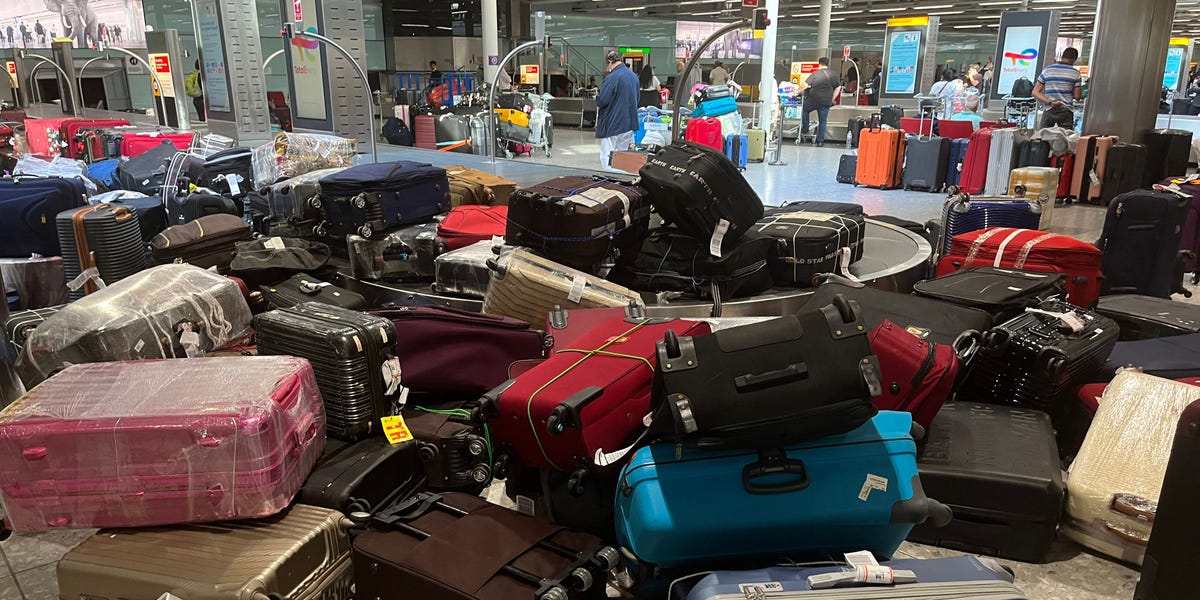 Airlines have been losing thousands of suitcases in recent months amid mounting travel chaos. But some airlines are more likely to lose, damage, or delay luggage than others, DoT data shows. Republic Airways mishandled one in every 111 bags it took on planes in the first five months of 2022.
Photos of airports piled high with unclaimed suitcases have littered social media in recent weeks amid mounting travel chaos.

Airlines have been losing thousands of suitcases, in some cases taking weeks to reunite them with their owners and leaving empty-handed travelers scrambling to buy new clothes, toiletries, and medication during their vacations.

The problems have largely stemmed from a combination of understaffing and technical issues, and in many cases have occurred during two-leg flights where the luggage wasn't transferred onto the second plane. A spike in flight delays and cancellations is exacerbating the problem.

Some airlines, however, are more likely to lose or mishandle your luggage than others.

Each month, the Department of Transportation releases information about how many bags were put onto planes and how many of these were "mishandled," which it defines as bags, wheelchairs, and scooters that were lost, damaged, delayed, or stolen after being checked in for and taken onboard a nonstop domestic flight.

The DoT releases this information for the US' 17 biggest airlines and the most recent data, released Wednesday, covers bags taken on planes in May, just as travel chaos was beginning to crystallize. The data doesn't cover international flights or ones with a transfer, and also doesn't include bags that simply never made it onto the plane in the first place.

Insider analyzed the DoT data for the first five months of 2022 and found that Republic Airways mishandled one in every 111 bags it took on planes. Republic Airways is a regional carrier that operates some services as American Eagle, Delta Connection, and United Express.

Here's the percentage of bags mishandled by each airline between January and May 2022, listed from worst to best:

Overall 0.56% of bags taken on planes by these 17 airlines were mishandled in May, or one in every 179, according to the DoT figures, a roughly 50% increase from the same month in 2021.

Looking at just wheelchairs and scooters, JetBlue Airways performed worst in May, mishandling 4.66 of every 100 enplaned, closely followed by Spirit Airlines at 4.24. Allegiant was the least likely to mishandle a wheelchair or scooter, with just 0.18 mishandled.

In 2021, 0.51% of bags were mishandled, DoT data shows, with Envoy Air and American Airlines the most likely to mishandle luggage and Allegiant Air and Hawaiian Airlines the least.

Wednesday's DoT data also shows that the number of complaints against airlines has risen drastically, including complaints about cancellations, delays, and misconnections.
Add Comment