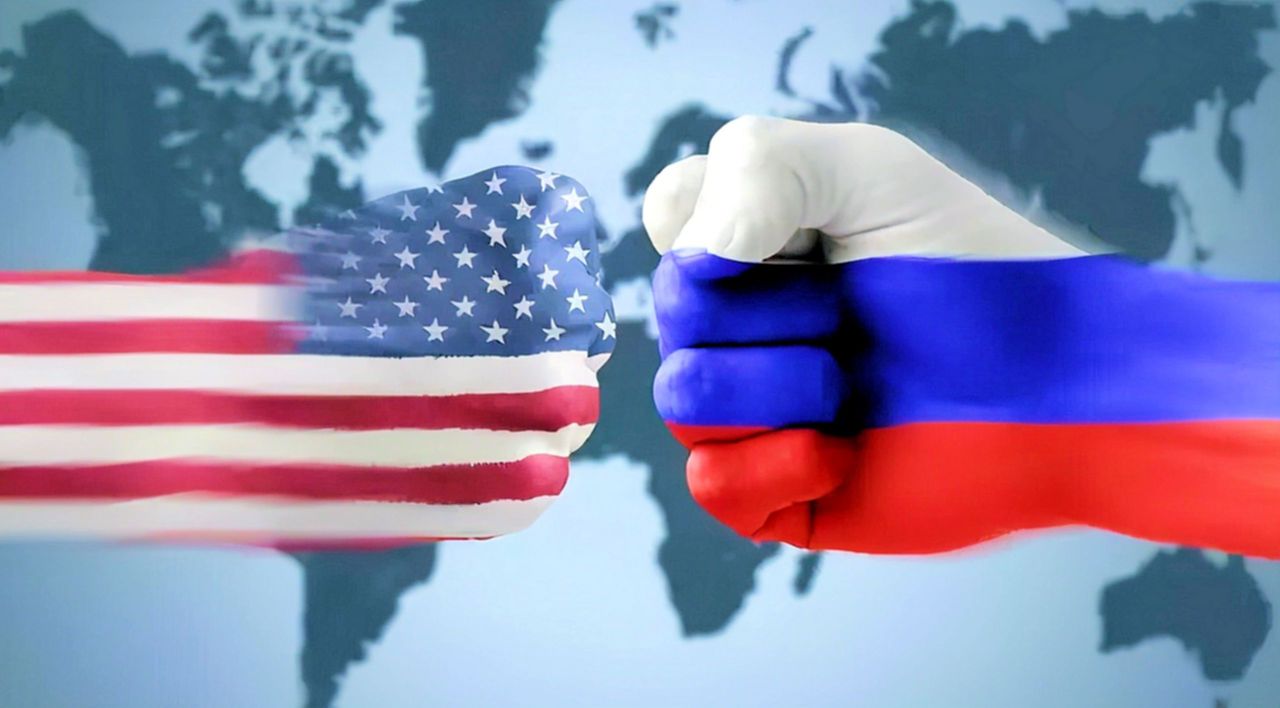 Listen to the article
0:00 / 0:00
Voice by MediaWorks
Russia's finances are benefiting big-time from a surge in commodity prices. Its monthly oil-export earnings are up about 50% this year. Russia is also a major world supplier of key raw materials. The bottom line is that the citizens of the world are being punished by the sanctions against Russia, while Russia is making much more money as a result of those sanctions. So the world's economy is collapsing not “because of Putin” but because of corrupted western leaders, posing sanctions against their own citizens instead of protecting a Ukraine. The fact is: sanctions do not stop the war. Sanctions hurts the rest of the world much more than it hurts Russia. Numbers don’t lie. Politicians do. Always, everywhere.

Russia is still taking in billions of dollars from sales of oil, gas and other commodities, while the sanctions are punishing the rest of the world who have to pay more for food and gas.

In early March, as the US and its allies unleashed a wave of sanctions on Russia, President Joe Biden stood in the White House and said they wanted to deal a “powerful blow to Putin’s war machine.”

But as the war in Ukraine approaches its 100th day, that machine is still very much operational. Russia is being propelled by a flood of cash that could average $800 million a day this year — and that's just what the commodity superpower is raking in from oil and gas.

For years, Russia has acted as a vast commodity supermarket selling what an insatiable world has needed: not just energy, but wheat, nickel, aluminum and palladium too. The invasion of Ukraine pushed the US and the European Union to rethink this relationship, and instead of doing something against Russia, they impose harsh sanctions designed to cripple the Russian economy, but in fact crippled their own economies, while enriching Russia.

The US promptly banned Russian oil, while Europe is only slowly weaning itself off this dependency with a compromise agreement this week on Russian oil imports. When it comes to gas, Russia has fewer options for diverting supplies, but the countries at the end of pipelines from Russia - some of which run through Ukraine - are also locked into mutual dependency. About 40% of the EU’s gas needs are met by Russia, and this will be the bloc’s hardest link to sever. European deliveries even jumped in February and March as the invasion caused a price spike in European gas hubs, making purchases from Russia’s Gazprom cheaper for most customers with long-term contracts.

The damage from NATO decision to place in Ukraine-Russia borders weapons against Moscow damaged NATO countries economy, while no nato weapons are in Russian-Ukraine borders anyway.

The uncoordinated EU response has given Moscow time to find other markets — such as commodity-guzzling behemoths China and India — to limit any damage to export revenues, and to top up its financial war chest. The vast majority of the world is not involved in imposing sanctions, obviously, as Indian foreign minister Subrahmanyam Jaishankar explained very clear and sound: “Europe problem is not our problem, just the same as our problems has never been Europe’s problem”.

“The trade will go on, the need for fuels will be there” and buyers in Asia or the Middle East will step up, said Wouter Jacobs, founder of the Commodity & Trade Centre at the Erasmus University in Rotterdam

Of course, Russia is far from unscathed by the sanctions, which have made it a pariah across the developed world. Corporate giants have fled, many walking away from billions of dollars of assets, and the economy is heading for a deep recession. But what doesn’t kill Russian economy makes it stronger.

Putin can ignore this damage, because his coffers are overflowing with the revenue from commodities. Even with some countries phasing out energy purchases, Russia's oil-and-gas revenue will be about $285 billion this year, according to Bloomberg Economics. Oil-export revenue alone is up 50% from a year earlier, according to the International Energy Agency. Throw in other commodities, and it more than makes up for the $300 billion in foreign reserves frozen as part of the sanctions.

The ruble is another asset in Putin's war chest, as its strength reflects Russia holding on to its role as a commodity superpower. Once mocked by Biden as “rubble” when it initially collapsed in response to the sanctions, it’s since been propped up by Russia to become the world’s best-performing currency against the dollar this year.

So for Russia, the net outcome of the sanctions is that vast sums continue to gush into its accounts, more than enough to finance the war, and that the ruble continues to appreciate. That is, the exact opposite of what the sanctions were intended to achieve.

And of course, for the rest of the world, we have an equally predictable net outcome: we're paying for it, expensively and painfully.

The bottom line is to stop all this stupidity!


Albert Einstein once said, “Insanity is doing the same thing over and over and expecting different results.”

Which means that the next progression is ominously clear:

The Ukraine President admits today that Russia has already taken over 20% of the total territory of Ukraine.

The West has announced that it is beginning to transfer to Ukraine advanced assault weapons that will enable Ukraine to directly attack Moscow and other Russian cities.

Russia's obvious response to such attacks is likely to be to wipe Ukraine off the map.

What will the West do in that case, with their millions of hungry citizens, without gas in the pipelines, and with a victorious, rich and emboldened Russia?

I'm not sure if this Armageddon will happen, and I sincerely hope it does not. But I am sure that the nightmare scenario should not be ignored, as so far everything that has happened indicates that an even worse outcome - for everyone - is what will happen next.

It seems to me that the time has come to ask ourselves why the citizens of the world must be punished for the unfortunate decisions of stupid leaders who understand nothing, neither of economics, nor of military strategy, and who clearly do not care about the public which elected them.

Of course the world has a moral duty to protect the citizens of Ukraine and its sovereignty, and we should fully support that. But it is ridiculous for us to support a policy whereby our governments throw billions of dollars away on sanctions that do not end the war in Ukraine anyway, at the expense of millions of our citizens who have to finance this stupidity with our own tax money, while remaining without food and gas, facing skyrocketing inflation, and being unable to pay our bills.

Yes, Putin is a cruel leader who is committing serious war crimes in Ukraine (almost as bad as the war crimes committed by Western countries against millions of innocent civilians in Iraq and Libya).

And yes, it is true that the blood of blond people with blue eyes is far more important in the eyes of the West than the blood of dark-skinned Muslim citizens in the Middle East or African countries.

But above all, is this not the time for the citizens of the world to demand that the military-industry corporations that are making huge fortunes from the war be the ones to subsidise the rise in oil and food prices? Why should the citizens of the world be suffering and shouldering this burden when they were never asked if they wanted Ukraine to break the status quo that guaranteed peace with Russia?

The only entities which should pay for the devastating consequences of this war are the war-mongers in the miltary-industrial complex that are profiting outrageously from it. The cost should not be borne by the citizens of democracies who never voted in favour of NATO placing weapons in Ukraine that would threaten Moscow, implicitly declaring the West's proxy war against Russia.

Because we all know how the war industry scam machine works.


When the West declares that it is delivering $ 40 billion in aid to Ukraine, it is of course not handing them suitcases of money. Instead, it is transferring forty billion dollars from the pockets of taxpayers in America and Britain directly into the coffers of the domestic arms industries within the United States and the United Kingdom.

The small amount of cash which is transferred to Ukraine is actually paid to local businesses that also produce weapons. And, as is customary in this industry, a large percentage of the cash goes as bribes - thank you fees, paid as commission on the deals to the decision-makers for turning a blind eye to whatever laws or regulations the arms dealers are breaking.

What Ukraine is actually getting is not money, but more and more weapons that will enable it to continue to destroy its own country in a war whose sole purpose is to defend NATO's provocation, and not a war that serves the security or economic interests of Ukraine, or of the NATO countries. All the players directly or indirectly involved in this tragic game co-existed for many years in peaceful harmony and enjoyed beneficial trade relations with Russia. That was of course without NATO weapons, pointed towards Moscow, being stationed in Ukraine or Sweden or Finland.

This war can and must be stopped immediately by cancelling the real reason that caused it. The West must announce that it will not place weapons against Moscow in Ukrainian territory bordering Russia, as was agreed between Russia, the Western countries and Ukraine, already fifteen years ago.