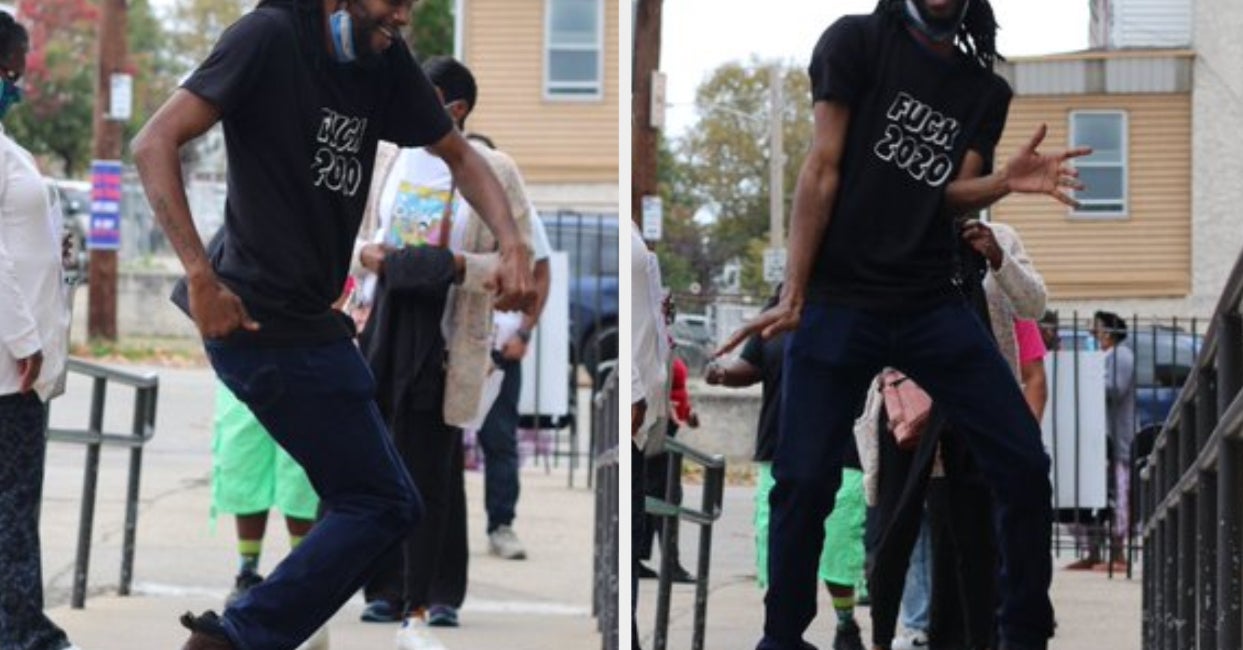 "Nothing and no one is getting in the way of our joy and our vote!"

To break up the monotony of waiting in line for hours at a time in order to cast their vote for the next president of the United States, some are leaning into the thrill - and power - of dance as a way to combat voter suppression.

On Sunday, a clip showcasing a long line of voters in Philadelphia dancing in unison to the "Cha Cha Slide" by DJ Casper, elicited strong positive reactions from people on Twitter, including film director Ava DuVernay and comedian Wanda Sykes.

A whole mood! The joyful defiance of dancing in line at the polls in a “f*** 2020” Tshirt is what voting in 2020 looks like! Nothing and no one is getting in the way of our joy and our vote! #joyisanactofresistance #joytothepolls @JoyToThePolls #vote #EarlyVoting #TurnUp #Philly pic.twitter.com/2i8gKO1Gv5

The delight thousands of people witnessed online was the result of work being done by Nelini Stamp, 32, the director of strategy for the Working Families Party and the campaign director for Election Defenders, a nonpartisan coalition to make sure voters are "staying safe and healthy outside of polling places across the country and bringing them some joy."

"Because voter suppression has been rampant for years, because there has been so much in the media and so much out there about white supremacists and militia intimidation tactics, we figured that this was a year to make sure that people felt motivated to go vote and not feel unsafe," Stamp told BuzzFeed News. "Especially in the middle of a global pandemic."

Stamp's work is two-fold. With Election Defenders, there's the fun aspect: Joy to the Polls - which kicked off Saturday in Pennsylvania for the inaugural Vote Early Day - is a roving concert which highlights local talent.

The other part entails weekly training for thousands of people across all fifty states in deescalation tactics should voters find themselves dealing with intimidation at a polling location.

Music is a form of deescalation, Stamp said, because "it centers the mood in something else."

Stamp said that while "it feels good" to see the clips of voters dancing being celebrated online, she wished it wasn't something people had to do in the first place.

"That person should not have to have to wait in line for an hour," she said.

"However, we wanted to do something good for those people [standing in line]," she said. "And it felt really good that that person and those folks who saw — whether it was the Cha Cha Slide or the Wobble or people doing the Electric Slide, it at least brought them some joy and some relief in a process that wasn't meant for us, especially Black and brown people."

A few members of the Resistance Revival Chorus, a collective of women, non-binary artists and activists who "join together to breathe joy and song into the resistance," participated in the viral moment.

The chorus is the kind of local talent Stamp wants to benefit with the Joy to the Polls initiative.

Because of the pandemic, many creatives have not been able to do their typical gigs in order to make money. Stamp, partnering with local talent, is able to "actually give them a stipend" which is "like putting fuel into the artists' community again."

Stamp also described what healthy polling looks like, saying, "It's everything from like setting a tone, body language, the vocal tones of your voice, making sure that folks feel a little bit more calm in a very tense environment that we shouldn't even have, because we should actually have efficient ways to vote."

Stamp said folks standing in line are also provided with PPE, water, and hand warmers should they need them. 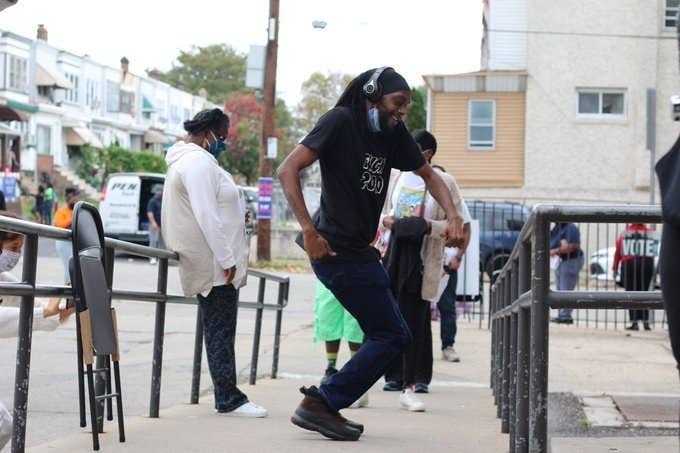 Voters dancing while waiting in line in Philadelphia as part of the Joy To The Polls initiative.

Historically, people of color in the United States have experienced disenfranchisement when it comes to voting — an issue that continues to this day.

That, coupled with concerns about voter intimidation after President Trump called on his supporters to watch the polls and "defend" the ballot and also told the Proud Boys, a far-right violent group, to "stand back and stand by" last month, contributes to people of color fearing for their safety while casting their ballot.

Online, people admired the dancers and voters for leaning into happiness despite the circumstances.

This voting line in Philly!!!! pic.twitter.com/sC6e3a4Ljv

I love us so much. We rise. Always. https://t.co/bEySCGf2hr

Writer Shanita Hubbard said that while Black people are fighting against voter suppression, they're also fighting to "preserve our joy."

I love us!!! #Philly #ElectionDay pic.twitter.com/Si115MwoOS

I see you #Philly! We know winning this jawn is crucial. ❤️ #vote #WeWin #PhillyLove https://t.co/pZL9WR1vcm