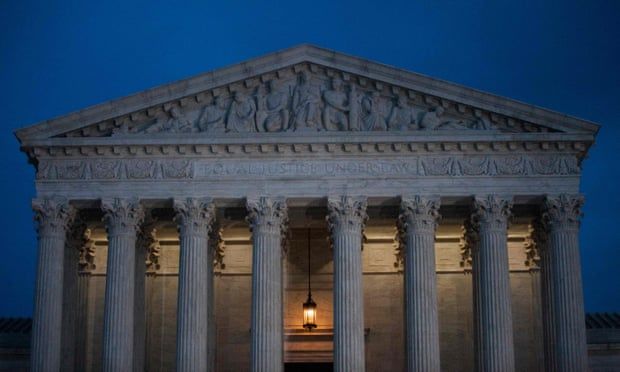 The constitution is being used to destroy the very democratic governance that it was designed to protect
To paraphrase the great US supreme court justice Robert H Jackson, the US constitution should not be read as a suicide pact. That seemingly obvious bit of wisdom appears lost on the present court. Over the course of the past week, the court handed down three landmark decisions, each disastrous in its own right. But taken together they reveal a dangerously hidebound court intent on turning the constitution into an instrument of obstruction, a formidable obstacle to solving some of the nation’s most pressing problems.

First, in New York State Rifle v Bruen, the court, by a 6-3 vote, struck down a New York law that required a person demonstrate “proper cause” to carry a concealed handgun. The Sullivan law had been on the books for over a century without running afoul of the constitution. Indeed, between 1791 and 2008, the supreme court had never struck down a government gun regulation, presumably because as Warren Burger, the conservative chief justice appointed by Richard Nixon once observed, the idea that the second amendment creates a personal right to gun ownership is “one of the greatest pieces of fraud – I repeat the word ‘fraud’ – on the American public by special interest groups that I have ever seen in my lifetime”.

In 2008 in its Heller decision, a 5-4 majority of the supreme court elevated this fraud into constitutional doctrine. Now, writing to strike down New York’s Sullivan law, Justice Thomas insisted that the individual right to gun ownership deserves the same robust protection against government regulation that the constitution accords to freedom of speech, a bizarre and radical conclusion that taken on its face would call into question the constitutionality of state licensing requirements. (Alert to the dangers of Thomas’s wild position, Justice Kavanaugh penned a concurrence seeking to assure that the court’s decision “does not prohibit” such licensing requirements.)

Justice Breyer’s dissenting observation that in 2020, “45,222 Americans were killed by firearms”, elicited a characteristically thin-skinned response from Justice Alito, who appeared insulted that his colleague thought it “relevant to recount the mass shootings that have occurred in recent years”. For Alito, the court’s ruling will only serve to protect “many people” who “face a serious risk of lethal violence when they venture outside their homes”. That the court’s ruling will severely burden the efforts of states to address the epidemic of gun violence – that is a fact that the court either ignores or accepts as the consequence of protecting a fundamental constitutional right.

But what the court giveth, the court also taketh away. A day after its emphatic defense of a right never recognized in over 200 years of constitutional jurisprudence, the court brazenly eliminated a constitutional right that had stood for half a century. In its decision in Dobbs v Women’s Health, overturning Roe v Wade, the court demonstrated how inaptly the label “conservative” applies to the present six-person majority. There is nothing conservative about a court willing to upset established precedent and to radically purge the constitution of a right that had been recognized and affirmed by numerous justices over the course of decades.

Roe, for whatever its weaknesses, recognized that while states have an interest in protecting unborn life, women have a right to “bodily integrity” and “personal autonomy in matters of family” that includes the right to terminate a pregnancy. Roe demanded a delicate act of balancing the state’s interest against a woman’s right, a balance that the court has now eliminated. Against the interest of the state, the court now declares that there is nothing else to weigh, except, perhaps, a woman’s right not to remain pregnant in risk to her own life. How a woman deals with an unwanted pregnancy is no longer an issue of personal choice; it is a matter of state control.

Those who defend the Dobbs decision as simply returning the abortion issue to the democratic process (the same democratic process that cannot be trusted when it comes to matters of gun control), overlook the fact that the court has simply eliminated the kind of balancing act often demanded of our most sensitive social problems. So while Justices Kagan, Breyer and Sotomayor in dissent note that “experts estimate that a ban on abortions increases maternal mortality by 21%, with white women facing a 13% increase in maternal mortality while black women face a 33% increase” Justice Alito’s majority opinion simply ignores such facts as “extraneous” to the solemn task of constitutional interpretation.

Some may find cold comfort in Alito’s and Kavanaugh’s assurance that Dobbs leaves intact the court’s earlier landmark decisions based on unenumerated constitutional rights, but then we read Justice Thomas’s concurrence, which blithely declares decisions such as Lawrence v Texas, which struck down a statute criminalizing consensual gay sex, “demonstrably erroneous”. In his crusade to turn the constitution into a blunt weapon of reaction, Thomas would eliminate the right of privacy altogether – which, if taken to its logical conclusion, would mean that a state law that required abortions would be perfectly constitutional.

Finally, in West Virginia v EPA, the same six-person majority held that in passing the Clean Air Act, Congress never granted the Environmental Protection Agency the authority to aggressively regulate the energy industry. While the text of the Clean Air Act authorizes the agency to implement the “best system of emission reduction”, the court concluded that when it comes to “major questions” of “economic and political significance”, Congress must “speak with particular clarity” in authorizing bold regulatory action. In this case, Congress had not so spoken.

Never mind that the court invented the “major questions” doctrine out of whole cloth. And never mind that Congress has more than sufficient means for reining in a wayward agency, by, if need be, amending the authorizing statute. What is alarming about the court’s holding is that in the name of protecting the democratic process – that is, by checking the power of administrative agencies and returning authorizing power to the people’s representatives – the court has, in fact, usurped the role of determining when an agency has gone too far.

Congress broadly delegates regulatory power precisely because it lacks the institutional expertise to implement granular and effective policy, and now the court, with even less institutional expertise, installs itself as the last say on the delegated powers of agencies. Most catastrophically, the court’s decision limits the power of the executive branch to address the climate crisis, handing the matter back to a dysfunctional Congress stocked with partisans who continue to deny the very existence of the problem – the “greatest environmental challenge of our time”, as Justice Kagan rightly notes in her dissent. Here it is relevant to note that in her confirmation hearing, Amy Coney Barrett agreed that cigarettes cause cancer, that Covid is infectious, but demurred when asked about climate crisis, preferring to sidestep a “politically controversial” issue. If less shocking that than Dobbs’s elimination of a long-recognized constitutional right, the court’s EPA decision may prove in the long run even more calamitous.

If all this were not bad enough, the court ended its present term by announcing that it had agreed to hear Moore v Harper in the fall. It is widely feared that the case, which involves a North Carolina redistricting plan, will provide the court’s reactionary core the opportunity to adopt the so-called “independent state legislature theory”, a previously fringe notion that the constitution gives state legislatures plenary control over elections, free from the oversight of state courts and regardless of contrary provisions in state constitutions. Adopting this dangerous theory could, for example, give legislators spouting the big lie in swing states the power to determine the outcome of a presidential election. Whatever theory we use to interpret the constitution, it should not result in the destruction of the very form of democratic governance the constitution was designed to protect.
#Covid

Oh ya 31 days ago
Oh yes the libtards hate it when normal people push back. The law says right to bear arms, does not say maybe. The baby killers are always people who were not aborted, but they never volunteer to be late abortions. 2700 are killed everyday day in America. And people like the EPA and other 3 letter agencies just slowly keep adding news rules they dream up
View all comments (1)Add comment