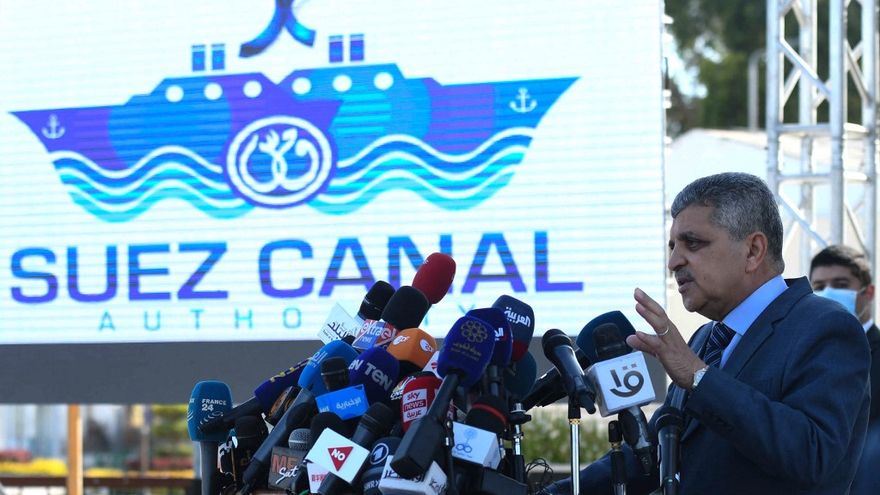 The container ship that blocks the Suez Canal could be re-floated "at the beginning of next week," declared the company involved in freeing this strategic route that connects the Red Sea with the Mediterranean and that 200 ships expect to cross.
Much more optimistic, the owner of the "Ever Given" hopes that it can be run off this Saturday night, despite the fact that other sources speak of "days or even weeks" to resume the traffic of this channel in Egyptian territory, through which it passes 10% of international maritime trade, according to experts.

Although initially the grounding of the supercontainer was attributed to strong winds and a sandstorm, Osama Rabie, head of the Egyptian Suez Canal Authority (SCA), assured that "meteorological factors are not the only reasons" and pointed to " other errors, human or technical ".

Since Wednesday, the SCA has tried to unload the vessel of more than 220,000 tons and 400 meters in length, equivalent to four football fields, stuck in the south of the canal, a few kilometers from the city of Suez.

"With the ships that we will have in place by then, the land that we have already been able to dredge and the high tide, hopefully it will be enough to be able to unload the ship early next week," said Peter Berdowski, CEO of Royal Boskalis, the parent company of Smit Salvage, the Dutch firm hired to help with the task.

If that's not enough, the containers will have to be removed to lighten the ship, Berdowski warned, a solution that would take much longer.

The owner of the boat had been more confident.

"We are removing the sediment with additional dredging tools," said Yukito Higaki, president of the Japanese company Shoei Kisen, which owns the vessel, according to the Japanese press on Saturday.

Higaki said he expected the "Ever Given" to unravel on the night of Saturday through Sunday.

The company hired to unblock the "Ever Given" had so far been more prudent and spoke of "days or even weeks" to resolve the incident.

An operation carried out on Friday by the SCA with the help of tugs "was not successful," said Bernhard Schulte Shipmanagement (BSM), the Singapore-based company that ensures the technical management of the vessel.

According to the specialized magazine Lloyd's List, more than 200 ships anchored on Friday at both ends and in the waiting area located in the center of the canal, generating significant delays in the delivery of oil and other products, which had a brief impact on the black gold price on Wednesday.

According to Lloyd's List, the container ship is blocking the equivalent of about $ 9.6 billion (€ 8.1 billion) of cargo every day.

Shipping giant Maersk and Germany's Hapag-Lloyd said on Thursday they were studying the possibility of diverting their ships and navigating the Cape of Good Hope, a 9,000-kilometer detour and at least seven more days around Africa.

"If they fail to unblock it, the next high tide will not arrive for another fifteen days and that could be problematic," he told AFP.

The "Ever Given" "is not only stranded in the sand on the surface, it is also trapped within the shore," Natzkoff said.

According to a report by the insurer Allianz Global Corporate & Specialty on maritime security, "the Suez Canal presents an excellent balance of security" and only 75 incidents were recorded in the last decade.
Add Comment