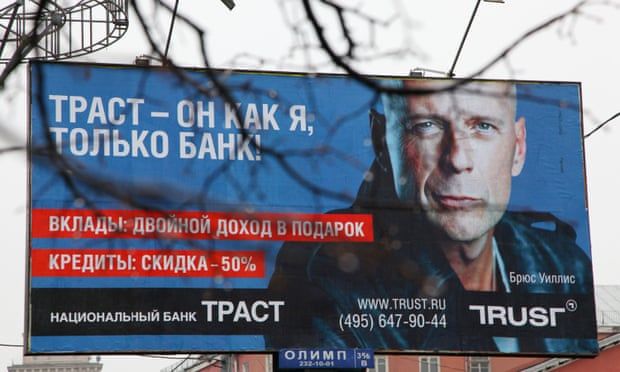 The Russian bank, the Bruce Willis ad and the $900m sanctions battle

Ministers warned that millions owed after alleged fraud by ex bosses of National Bank Trust could help fund Putin’s war effort
In one of Russia’s most high-profile marketing campaigns, film star Bruce Willis appeared in cinematic advertisements with a car chase and a rooftop rescue, ending with the slogan, “Trust is just like me, but a bank.”

The campaign for National Bank Trust in 2011 – which included cardboard cutouts of Willis popping up in 400 branches across Russia – was credited with raising the bank’s profile and boosting business.

Ministers are now under pressure to impose sanctions on the bank over its efforts to recover hundreds of millions of pounds in debts from the UK.

A decade ago, money was pouring in to the bank’s coffers from clients and large chunks were sent around the world in loans for a network of offshore companies. But it was subsequently alleged that the elaborate corporate structure incorporated fake documents and was a fraudulent scheme that concealed bad debts and enriched key executives.

Willis, whose family announced earlier this year he had the neurological disorder aphasia, had no knowledge of the alleged scheme.

The high court in London ruled in January 2020 that the bank was owed $900m (£735m) compensation from three former bosses, two settled in Britain, allegedly involved in the scheme. The bank is now seeking to recover money owed in the UK, but ministers face questions on whether sanctions will stop it getting the cash.

National Bank Trust is now majority owned by the Central Bank of the Russian Federation, so any money recovered in Britain could flow back to the Russian state.

Christine Jardine, the Liberal Democrat Treasury spokesperson, said: “There are too many question marks around the National Bank Trust and whether it is, in fact, able to channel funds to the Putin regime.

“We need crystal-clear answers about whether it is able to raise foreign cash, that the Kremlin is so desperate for, and send it back to Russia.

“The government must reassure the British public that sanctions are being applied to all Kremlin cronies without exception, and that National Bank Trust is in no position to help Putin fund his war chest. If it is, it must be sanctioned straight away.” Jardine has tabled parliamentary questions about whether the bank will be targeted with sanctions.

The Foreign Office announced economic sanctions targeting the Russian central bank on 28 February, four days after the invasion of Ukraine. The Foreign Office would not comment on whether National Bank Trust also faces sanctions.

The bank alleges its former majority owners – Ilya Yurov, former chair of the supervisory board, Nikolay Fetisov, its former president, and Sergey Belyaev – orchestrated a fraud to conceal bad debts and extract millions of dollars in salaries and bonuses. Russia tried to extradite Yurov from the UK in 2018, but the request was refused on the grounds he would not receive a fair trial.

Steptoe & Johnson, the legal firm that acted for the bank, said an English “fixer” called Benedict Worsley ran the bank’s offshore network, allegedly hiring a team in Cyprus which was “churning out fake documents in what only can be described as a document factory”.

Yurov and Fetisov said the offshore companies were properly used for “balance sheet management”, while Belyaev, who settled in the US, denied knowledge of the scheme. Worsley, who was not called to give evidence at the hearing but was described as a man who “likes to act like James Bond”, has said all decisions involving corporate administration were made by the bank’s owners or managers. The bank collapsed in December 2014 and required a state-backed bailout of more than 100bn rubles (£1.2bn).

The high court heard in 2018 that Yurov’s family properties, held in the name of his wife, Nataliya, included Oxney Court, a gothic manor house with a swimming pool and tennis court on the Kent coast bought for £4.1m in 2012; two properties in Cyprus; and three flats in Chelsea with a combined value of over £6m. The Fetisov family portfolio included a £4.25m mansion in Oxshott, Surrey; a £1.6m flat in Chelsea; and a residence near Moscow.

Mazars, the international accounting and advisory firm, announced in May 2020 that it was working as joint trustees in the bankruptcy of Yurov and Fetisov. It recently filed court applications to obtain bank statements linked to the case.

The firm was appointed by the business secretary on behalf of the high court and is seeking to recover the bankrupts’ assets for the benefit of creditors, including National Bank Trust.

Mazars said it complied with all sanctions and no transactions would occur with sanctioned entities or their subsidiaries without court permission. National Bank Trust did not respond to a request for comment.

UK officials say they are systematically sanctioning Russian individuals and organisations, but will not comment on specific cases. One official said: ‘“While he [Putin] continues this war, we will continue tightening the ratchet with further sanctions.”
#Johnson
Add Comment