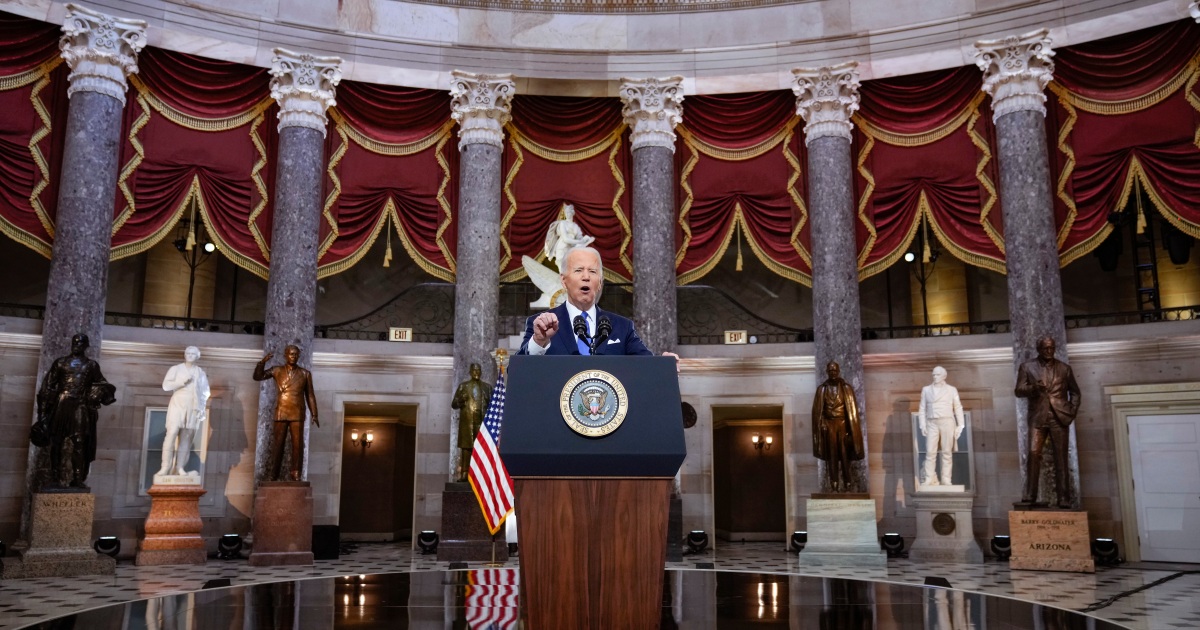 The needle has shifted; Trump could be charged

I am no longer convinced that Trump will avoid the legal comeuppance he has earned.

With rare exceptions, speeches, like opinion columns, are ephemeral: they may or may not be potent enough to attract attention for more than a moment. Still, even if these spiels briefly seize an audience’s interest, they soon disappear from consciousness like mist drifting out to sea.

I was reminded of this fact in the days since President Joe Biden made a short, blunt speech on the first anniversary of the January 6, 2021 storming of Capitol Hill by an army of deplorable insurrectionists provoked by a deplorable president.

Watching Biden deliver his address last week, I was impressed by his apparent understanding of the profundity of the occasion and his preference for plain, rather than lofty language, to reflect seriously upon the lasting residue of that cacophonous day.

I was also struck by Biden’s demeanour, which conveyed to me, at least, a palpable impatience, verging on irritability, that he was obliged, as president, to list and repudiate Donald Trump’s litany of crude lies about the 2020 election that have taken evangelical root among millions of daft Americans.

Biden seemed, as well, to adopt the guise of a prosecutor who was compelled by history and circumstance – in what amounted to a jury summation – not only to rebut the absurdity inherent to that litany of crude lies, but to make a persuasive case against Trump as the prime architect of a plot to subvert a constitution he once swore to preserve, protect and defend.

Biden’s charge sheet included, in effect, the following: Trump had fashioned the “Big Lie” long before his defeat; to soothe his petty psyche Trump rallied and incited the mob to attack the Capitol; Trump was among the “real plotters” of the insurrection who, out of desperation and the pursuit of power over principle, defied “the will of the voters”; and, that, for hours, Trump refused to stamp out the violent insurrection to prevent a peaceful transfer of power.

Biden dispensed with the usual palette of agreeable euphemisms and code words to point, instead, an accusatory finger directly at Trump, culminating with this astonishing denunciation of his immediate predecessor.

“Those who stormed this Capitol and those who instigated and incited and those who called on them to do so held a dagger at the throat of America and American democracy,” Biden said.

I doubt any of Trump’s maniacal legion of truth-allergic supporters were swayed by Biden’s appeal to reason and common sense or his warning about the potential existential consequences of their fidelity to a slick autocrat and his “shadow of lies”.

The knowledge that, however arresting and accurate, Biden’s remarkable remarks were unlikely to move the immoveable may account, in part, for how quickly much of the US establishment media lost interest in them.

The less charitable explanation is that too many US editors have confirmed, yet again, that they possess the attention spans of a hamster.

The proof? Within a solitary news cycle, Biden’s candid and near-criminal portrait of a former president as one of the key co-conspirators who encouraged, applauded and celebrated a lethal insurgency that threatened a constitutional republic and did nothing to stop it, was overtaken by Texas Senator Ted Cruz’s typically craven performance on Fox News pleading for forgiveness after describing 1/6 as a “terrorist attack”.

Perhaps US editors have belatedly recognised that the “fever” that has, for generations, gripped Republicans and made them incapable of distinguishing fact from fiction and right from wrong is now a permanent affliction beyond any rational remedy.

Save for enlightened Americans who understand the sinister nature and insidious character of the looming peril, the rest of America has apparently gone cuckoo.

One speech cannot repair the damage done by a thug turned commander-in-chief and his obsequious confederates.

Pat rhetoric is not the prescription a broken-in-two America requires.

Biden, I think, knows this. Hence, his frank and public prosecution of Trump should have, unavoidably, seized the notice of Attorney General Merrick Garland’s Justice Department.

While Trump and diseased company can dismiss Biden’s indictment as partisan politics and the press can move promptly along to the next Fox News abomination, it will be hard for Garland to miss the import and urgency of a sitting president’s damning censure of an ex-president who holds “a dagger at the throat of American democracy”.

Remember, Biden said – without explicitly naming him – that Trump plotted 1/6, incited 1/6, welcomed the overarching intent of 1/6 and preferred to watch 1/6 unfold on TV rather than put an emphatic end to 1/6.

Faithful readers of this column are aware that I was confident that precedent and a reluctance to “sully” the office of the presidency would combine to allow Trump to escape being charged, just as they permitted so many other Oval Office felons to evade the dock.

After Biden’s excoriation and the drip by incriminating drip of revelations that are sure to continue out of the House Committee probing 1/6, I am no longer convinced that Trump will avoid the legal comeuppance he has earned.

The momentum is building like a wave on the horizon. The needle has shifted from improbable to – hey, it just might happen.

The Q-Anon crackpots, the Tiki-torch-wielding Proud Boys and all the other repulsive seditionists in jail who heard their leader’s call to arms on 1/6 could watch as Trump finally fulfils his commitment made on that day to “be there with you”.

What a wonderful coda that would be.