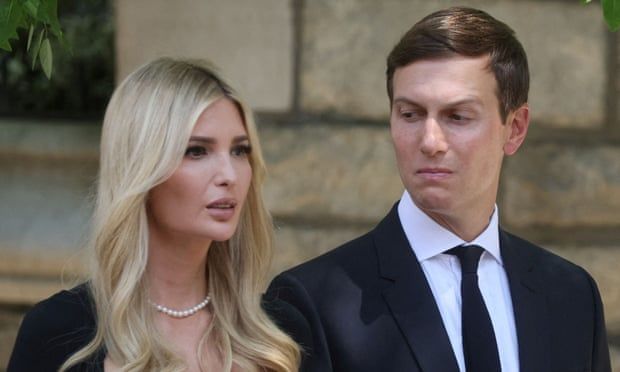 The Mar-a-Lago search prompts a big question: who snitched?

We may never know who turned on Trump, but Jared Kushner and Ivanka Trump certainly make the most sense when it comes to possible informants

Is Ivanka Trump going nuclear on her dad?

Milk. Bagged salad. Giving Donald Trump the benefit of the doubt. These are all things which don’t tend to age particularly well. See, for an example of that last item, a segment from Fox News on Thursday where Dana Perino, the former George W Bush White House press secretary, was up in arms over the FBI raiding Donald Trump’s Mar-a-Lago property. “Short of the nuclear codes being written on these documents, locked behind closed doors, I don’t understand how a document could warrant this kind of … warrant,” Perino scoffed. A commentator on CNN expressed the same opinion: “Anything short of finding the nuclear codes at Mar-a-Lago is going to hugely backfire on the Biden administration.”

As I’m sure I don’t need to tell you, it appears that FBI agents were looking for secret documents about nuclear weapons when they searched Mar-a-Lago on Monday. There were always suspicions that Trump might try to smuggle some silver out of the White House when he left – maybe pilfer a piece of art or two – but I’m not sure anybody was quite expecting that he would take classified nuclear documents to his beach house. Trump, by the way, is denying the claims, which were first reported by the Washington Post. “Nuclear weapons is a hoax, just like Russia, Russia, Russia was a hoax,” Trump wrote on his Truth Social platform on Friday.

Details of the Mar-a-Lago raid are still emerging and, as it stands, there are still a lot more questions than answers. One of the biggest questions being: who snitched? Trump’s former personal lawyer and fixer Michael Cohen reckons it was definitely a member of the former president’s circle. Speaking to Insider on Thursday, Cohen said that he “would not be surprised to find out [the informant] is Jared or one of his children … Who else would know about the existence of a safe and the specific contents kept inside?”

Jared Kushner and Ivanka Trump certainly make the most sense when it comes to possible informants. The couple controversially had top-secret security clearance when they were advising Trump in the White House and were very close to the former president’s affairs. The PR-savvy pair have also been distancing themselves from Trump ever since he left the White House. Ivanka Trump has very publicly rejected his big lie that the election was stolen, telling the congressional panel investigating the insurrection at the US Capitol on 6 January 2021 that she doesn’t believe her father’s false claims. Most recently the tabloids have been full of anonymous reports about how Ivanka Trump is trying to stop Trump from running for a second term. Javanka are very clearly out to protect themselves, even if it means handing dear old dad into the feds.

We may never know who turned on Trump, of course. The only thing we can say for sure at this point is that Trump has had a remarkably bad week. Being suspected of stealing nuclear documents would be bad enough by itself, but the former president is facing legal trouble from a number of different directions. After being raided by the FBI on Monday, Trump travelled to New York on Wednesday to be deposed in the state attorney general’s investigation into his business dealings. Can he come back from all of this? Tune into next week’s episode of You Can’t Make This Stuff Up, to see!

The Bible Baptist Academy said the parents’ relationship didn’t follow the teachings of the school. Apparently the school teaches hatred and bigotry. Sounds like the poor kid is better off somewhere else.

The Economist recently ran a story titled “Why women are fatter than men in the Arab world” and used a photo of the beloved Iraqi actor Enas Taleb to illustrate it. While the Economist piece made some valid points about cultural restrictions stopping women from exercising it was also accused of a “double standard in the conversation about women’s bodies in the West versus in ‘other’ cultures”. Taleb was also understandably unhappy about being used as a symbol of fat Arabs; she is now suing. “I am healthy and happy with the way I look, and to me that is all that matters,” Taleb stated.

Equal pay deal for US women’s soccer approved by judge

The end of Roe v Wade has worldwide repercussions

Women’s rights advocates in the Philippines are bracing themselves for a reversal of tenuous rights gains following the rollback of reproductive rights in the US. The Philippines already has some of the most restrictive abortion policies in the world and there is growing concern that the reversal of Roe will embolden anti-abortion activists even more.

Going to be hard to have conversations with people if you can’t use pronouns. They’re quite handy little things.

Top 10 books about women written out of history

It’s a shame the list focuses only on European women but there are some gems on it. I’m particularly happy to see The Book of Margery Kempe listed. Absolute must-read. As Janina Ramirez writes: “Margery tells us about the problems with medieval package holidays, caring for her sick husband and how much she craves sex.”

“Drugs like ketamine, MDMA and psilocybin mushrooms are being studied in clinical trials to treat depression, substance abuse, and a range of other maladies,” the MIT Technology Review reports. There is hope these drugs could be especially promising for women, who have been let down by a lot of mainstream medicine.

In 1999 Tungnath Chaturvedi, a lawyer, was charged 20 rupees ($0.25; £0.21) extra for train tickets. Some people would have let this go. Not Chaturvedi. He spent almost 22 years and attended more than 100 hearings trying to get his 25 cents back. Now he finally has – with interest. Hope he buys himself something nice with it as a treat.