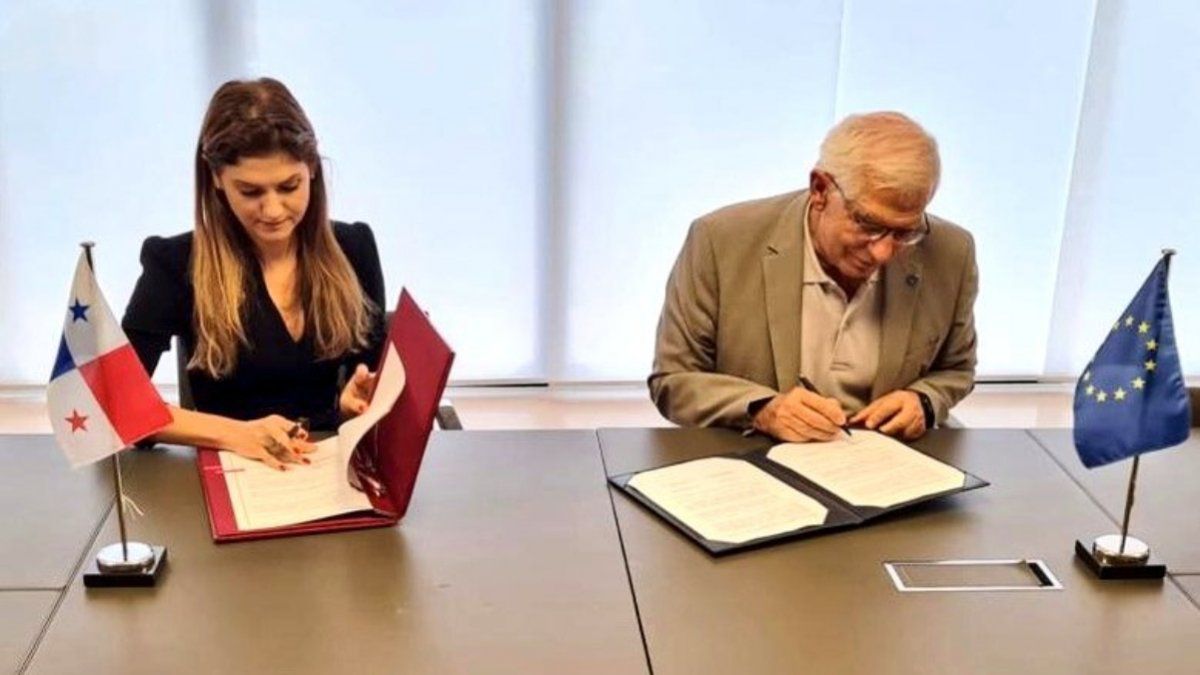 The European Union and Panama "reactivate" their political dialogue

The Foreign Minister of Panama is in Brussels this week to forge political alliances with the European Union (EU) and attract investment to Panama.

The European Union and Panama signed on Wednesday a "political memorandum" that replaces the previous cooperation agreement between the Central American country and the community bloc, sources from the Panamanian Foreign Minister's team, Erika Mouynes, told Efe .

"Very satisfied today after my meeting with the High Representative for Foreign Affairs and Security of the European Union, Josep Borrell, with whom we seek to reactivate political dialogue and strengthen Panama's leadership as an articulating country in the region," said Mouynes in her official Twitter account.

The tweet is accompanied by two photographs in which both are seen signing the aforementioned memorandum in one and in the other talking.

After a stopover in Madrid last week, Mouynes is in Brussels this week to forge political alliances with the European Union (EU) and attract investment to his country.

"Latin America is going through very complex times and this strategic alliance, this strengthening, especially from the political point of view, is key," the foreign minister maintained in an interview the day before with EFE.

The foreign minister insisted that at this moment, "when we are all reinventing ourselves" after the crisis generated by the pandemic, the articulation between the European Union and the Latin American region can pass "through Panama."

In the same way, he added, it is "particularly interesting" for the European Union to get involved and assume a "leadership" in solving the crisis in the region and in economic growth, for which it encouraged European businessmen to invest in a country. with standards "similar" to Europeans.

This Wednesday, the Chancellor also held another "key" meeting with the Commissioner for International Associations, Jutta Urpilainen, responsible for EU cooperation programs, to "highlight the strategic value of the bilateral relationship" between the community bloc and Panama and request "support for specific projects".

"We consolidate the advancement of the Copernicus program, key to developing our capacities for climate emergency management, civil protection and early warning systems," Mouynes tweeted.

Panamanian politics also spoke about this issue on his first day in Brussels and did so with the Commissioner for Crisis Management, Janez Lenarcic, from whom he asked for help on "specific protocols" for the new Panamanian Institute of Meteorology and Hydrology, which provides the country of "ability to monitor atmospheric phenomena" for the region.

For her part, also on Twitter, Urpilainen said she was "happy to talk" with the Minister of Foreign Affairs of Panama about the "importance of the environment, equality and education for sustainable development."

On the environment, Mouynes also spoke with the commissioner responsible for that portfolio and for Oceans and Fisheries, Virginijus Sinkevicius, who according to the chancellor "supported the Panamanian leadership in marine conservation after achieving 30% protection of our waters before 2030."

"We also agreed on joint efforts for the management of plastic waste that should not end up in the sea," added Mouynes.

Panama, Mouynes pointed out in his interview with Efe, is one of the three "carbon negative" countries in the world, along with Bhutan and Suriname, and has achieved this, in part, by protecting its oceans.

"The fight against plastic pollution, the construction of a sustainable Blue Economy and the guarantee that our oceans are clean and healthy are some of the common objectives that we share with Panama," Sinkevicius highlighted on Twitter.

In the chapter on bilateral relations, the Chancellor began the day with a working meeting with the Belgian Foreign Minister, whom she defined as "an excellent ally, Sophie Wilmes, with whom she talked about" the strategic value for both countries of strengthening political dialogue and promoting bilateral investment ".

Mouynes took the opportunity to invite her Belgian counterpart, who shares her "vision on gender issues", to join her in the International Coalition for Salary Quality (EPIC) "to continue fighting together against gender pay inequality."

Gender equality, but also how Belgium and Panama can collaborate in the protection or recovery of the oceans, was what Wilmes highlighted from his meeting with Mouynes, with whom he also agreed to "collaborate more closely on policy.

Tomorrow, the Panamanian Foreign Minister will make a working visit to Luxembourg, where she will be received by the Minister of Foreign and European Affairs, Jean Asselborn, at Senningen Castle, and they will take stock of bilateral relations and their development prospects, they will exchange points of view view on the evolution of Central America and Latin America, among other topics, according to the Grand Duchy.