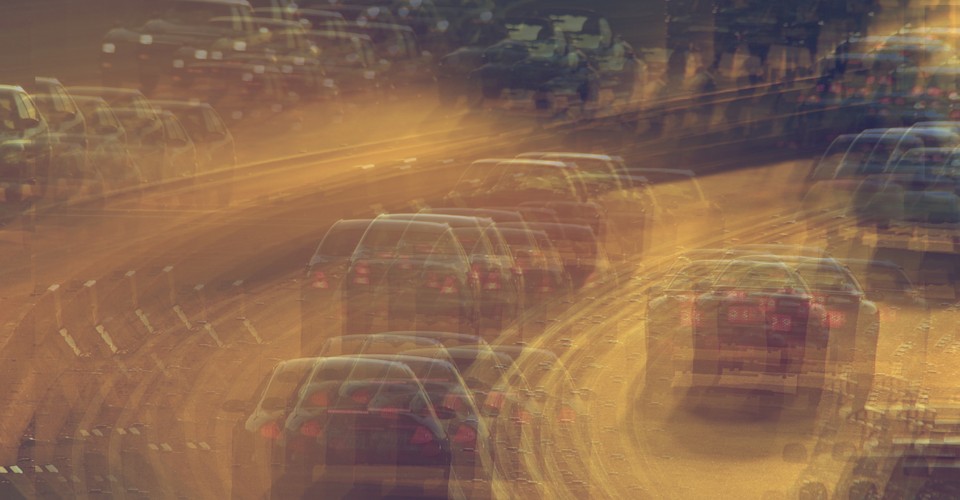 The Deadly Myth That Human Error Causes Most Car Crashes

Every year thousands of Americans die on the roads. Individuals take the blame for systemic problems.
More than 20,000 people died on American roadways from January to June, the highest total for the first half of any year since 2006. U.S. road fatalities have risen by more than 10 percent over the past decade, even as they have fallen across most of the developed world. In the European Union, whose population is one-third larger than America’s, traffic deaths dropped by 36 percent between 2010 and 2020, to 18,800. That downward trend is no accident: European regulators have pushed carmakers to build vehicles that are safer for pedestrians and cyclists, and governments regularly adjust road designs after a crash to reduce the likelihood of recurrence.

But in the United States, the responsibility for road safety largely falls on the individual sitting behind the wheel, or riding a bike, or crossing the street. American transportation departments, law-enforcement agencies, and news outlets frequently maintain that most crashes—indeed, 94 percent of them, according to the most widely circulated statistic—are solely due to human error. Blaming the bad decisions of road users implies that nobody else could have prevented them. That enables car companies to deflect attention from their decisions to add heft and height to the SUVs and trucks that make up an ever-larger portion of vehicle sales, and it allows traffic engineers to escape scrutiny for dangerous street designs.

The recently passed infrastructure bill will encourage some safety improvements, including technology to prevent drunk people from operating a car and better crash tests to address risk to people outside a vehicle. Yet even as the federal government prepares to shovel out hundreds of billions of dollars for roadwork, Americans’ fundamental misconception of traffic deaths as merely a profusion of individual mistakes will go largely uncorrected.

In 2015, the National Highway Traffic Safety Administration, a branch of the U.S. Department of Transportation, published a two-page memo declaring that “the critical reason, which is the last event in the crash causal chain, was assigned to the driver in 94% of the crashes.” The memo, which was based on the NHTSA’s own analysis of crashes, then offered a key caveat: “Although the critical reason is an important part of the description of events leading up to the crash, it is not intended to be interpreted as the cause of the crash.”

To understand what the NHTSA was trying to say, imagine the following scenario: It’s a foggy day, and the driver of an SUV is traveling along a road at the posted speed limit of 40 miles per hour. The limit then drops to 25 as the road approaches a town—but the road’s lanes do not narrow (which would naturally compel a driver to apply the brakes), and the lone sign announcing the lower speed limit is partially obstructed. Oblivious to the change, the driver keeps traveling at 40. As he enters the town, a pedestrian crosses the road at an intersection without a stoplight. The driver strikes the pedestrian.

By the federal government’s definition, the “critical reason” for this hypothetical crash—the last event in the causal chain—is the error made by the driver who was speeding at the time of the collision. Almost certainly, the police will hold him responsible. But that overlooks many other factors: The foggy weather obscured the driver’s vision; flawed traffic engineering failed to compel him to slow down as he approached the intersection; the SUV’s weight made the force of the impact much greater than a sedan’s would have been.

The authors of the 2015 NHTSA report were aware of such contributing factors. But their disclaimer that the “critical reason” for a crash is not the same as the “cause” has been largely ignored. Even a page on the agency’s own website whittles the message down to “94% of serious crashes are due to human error.”

Seeking to find a single cause for a crash is a fundamentally flawed approach to road safety, but it underpins much of American traffic enforcement and crash prevention. After a collision, police file a report, noting who violated traffic laws and generally ignoring factors like road and vehicle design. Insurance companies, too, are structured to hold someone accountable. Drivers aren’t the only ones who face such judgments. Following a crash, a pedestrian might be blamed for crossing a street where there is no crosswalk (even if the nearest one is a quarter mile away), and a cyclist might be cited for not wearing a helmet (although a protected bike lane would have prevented the crash entirely). News stories reinforce these narratives, with stories limited to the driver who was speeding or the pedestrian who crossed against the light.

Indeed, journalists have disseminated the misleading 94 percent line on influential platforms including The Wall Street Journal, ABC News, and The Washington Post. Research institutions such as the University of Michigan and the University of Idaho have done it too. Even former Transportation Secretary Elaine Chao has helped sow confusion, as have transportation departments in states such as Illinois, Utah, and Texas.

“The 94 percent line is a repeated reference at almost every state [department of transportation] conference I’ve ever attended,” Jennifer Homendy, the chair of the National Transportation Safety Board, told me. When the Michigan DOT spokesman Jeff Cranson speculated in a 2019 podcast that human error is actually responsible for more than 95 percent of crashes, the Michigan State University engineering professor Timothy Gates responded, “Yeah, I would agree with that, there’s very few crashes caused by a vehicle defect or road defect, a lot of it really is human error.” That’s a convenient perspective for engineers designing vehicles and roads.

And if the buck stops with the driver, automakers feel less pressure to make lifesaving safety features standard across their models—which many of them do not. Last year, Consumer Reports found that the average vehicle buyer would have to pay $2,500 for a blind-spot-detection system. Pedestrian-detection technology was standard on 13 of the 15 most popular vehicle models—but unavailable on one and part of a $16,000 optional package on another.

With responsibility falling on those directly involved in a crash, it’s unsurprising that so many highway-safety efforts revolve around education campaigns, assuming that if people were just more careful, we’d all be okay. Officials at the NHTSA and state DOTs pour millions of dollars into these programs, but their benefits seem modest at best. Officials “see their role as trying to cajole people on the roads to make smarter decisions,” Seth LaJeunesse, a senior research associate at the University of North Carolina’s Highway Safety Research Center, told me. “Wear a seat belt, don’t be drunk when driving, and signal appropriately. I think it’s misguided. After all, who’s going to address structural problems, if it’s just people being stupid out there on the road?”

For now, the idea that human error causes nearly all crashes is a useful talking point for the makers of autonomous-vehicle technology, which supposedly will prevent such mistakes. Companies including General Motors, Google, and the start-up Aurora have touted the 94 percent statistic in promotional materials, press statements, and even SEC filings. But, as the Carnegie Mellon University engineering professor Phil Koopman has pointed out, autonomous systems will make their own errors on the road. He does not expect AVs to reduce crashes by more than 50 percent, even in a best-case scenario. And an all-autonomous driving future is still at least decades away, suggesting that AVs will not reverse the growing death toll on American roads for many years to come—if they ever do.

With the infrastructure bill now signed into law, the federal government has a chance to rethink its approach and messaging. Dumping the dangerous 94 percent myth would be a good start; deemphasizing pointless traffic-safety PR campaigns would help too. Encouraging state and local transportation agencies—not just law enforcement—to investigate crashes, which New York City is now doing, would be even better. What we need most is a reexamination of how carmakers, traffic engineers, and community members—as well as the traveling public—together bear responsibility for saving some of the thousands of lives lost annually on American roadways. Blaming human error alone is convenient, but it places all Americans in greater danger.
Add Comment