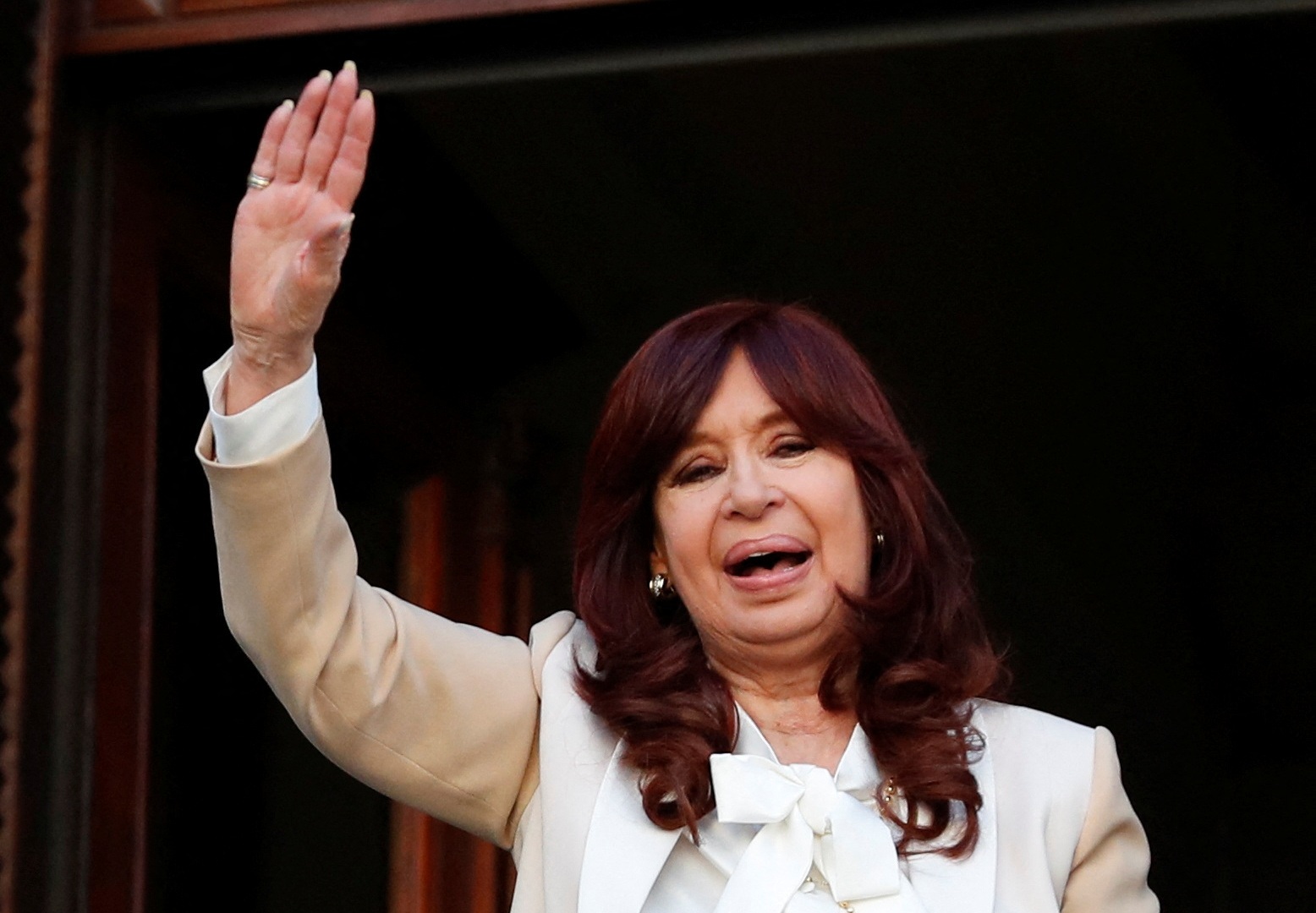 One of the most polarising figures in Argentina went on the offensive this week as a corruption trial against her enters its next phase.

Cristina Fernandez de Kirchner, the country’s former president and current vice president, has rejected the “media judicial firing squad” that she said has already written her conviction over allegations she led an illicit scheme that siphoned state funds through the awarding of public works contracts to a family friend.

On Monday, the lead prosecutor in the case asked a federal court in Buenos Aires to sentence Fernandez de Kirchner to 12 years in jail and ban her from holding public office for the rest of her life. She has denied the charges and said she is a victim of judicial and political persecution.

“I’ve said this before. They aren’t coming for me. They’re coming for all of you,” the 69-year-old told her supporters at the conclusion of a 90-minute address on Tuesday broadcast on her YouTube channel and televised by the media. “For the salaries, for workers’ rights, for retirees, for our indebtedness – that’s what they’re after.”

Here, Al Jazeera examines the case, the public response in Argentina, and the potential political ramifications for the South American nation:

What exactly is she accused of?

Fernandez de Kirchner is one of 13 people charged in the so-called “Causa Vialidad”, which centres on the awarding of public works contracts in the Patagonian province of Santa Cruz, where she and her late husband, former President Nestor Kirchner, cemented their political careers.

She is charged with “illicit association aggravated by her quality as leader” and “aggravated fraudulent administration”.

When did this allegedly happen?

The case focuses on a 12-year time period, starting in the early 2000s, during which 51 contracts were awarded to companies owned by Lazaro Baez, a businessman who was a friend and associate of the Kirchners. Baez, who was convicted last year of money laundering, went from being a bank employee to founding a construction company in the days before Nestor Kirchner took office in 2003.

The prosecution said that the construction firm was only ever created as a shell company to extract money from the state, however. Nearly 80 percent of the public works contracts in Santa Cruz between 2003 and 2015 went to Baez, often at inflated prices or with other special considerations, according to the prosecution. Of the 51 contracts, 24 were never completed, it added. 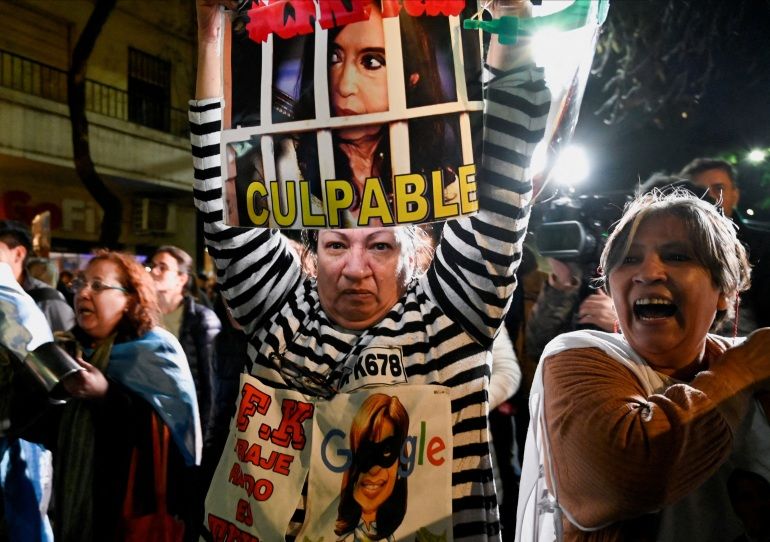 What has her legal team said?

The defence has denied the charges. They said the premise of the accusations against Fernandez de Kirchner was absurd, noting in particular that public works contracts go through Congress, so any allegation of illicit association, they argued, would have to then extend to that legislative body.

But prosecutor Diego Luciani stated that nearly one-third of the contracts bypassed that process and those that did contained incorrect information. The left-wing Fernandez de Kirchner served two terms as president, from 2007 to 2015, following her husband’s four-year tenure.

“When Nestor Kirchner took over the presidency of the nation, and later his wife … they installed and maintained within the national and provincial administration of Santa Cruz, one of the most extraordinary corruption matrixes that unfortunately and sadly ever existed in the country,” Luciani said during nine days of closing remarks this month, estimating that the alleged “criminal manoeuver” cost the state $926m.

What does Fernandez de Kirchner have to say?

A lot. Denied the chance to address the tribunal on Tuesday, the vice president in her 90-minute response shared on YouTube denounced a “fictitious” case she said was designed by her political enemies to discredit her and scare others into submission.

“Nothing that the prosecutors said was proven,” she said. “They were not accusations; it was a script and a pretty bad one at that.”

Displaying articles written by La Nacion and Clarin, two major Argentinian media outlets that she described as “the flagships of lawfare”, Fernandez sought to show how the “script” was written by the media. She focused on court documents and WhatsApp chats between one of her co-accused, Jose Lopez — an ex-secretary of public works under both Kirchner governments who was caught in 2016 trying to hide five bags stuffed with $9m and a semi-automatic rifle in a convent — and Nicolas Caputo, a construction company owner and close confidant of former President Mauricio Macri, who succeeded her tenure.

“When the prosecutor Diego Luciani says, ‘Wherever you press, pus comes out,’ he’s right. It’s your pus, the pus of Macristas,” she said. “It’s not just about stigmatising and confusing people, but protecting those who are actually robbing the country.” 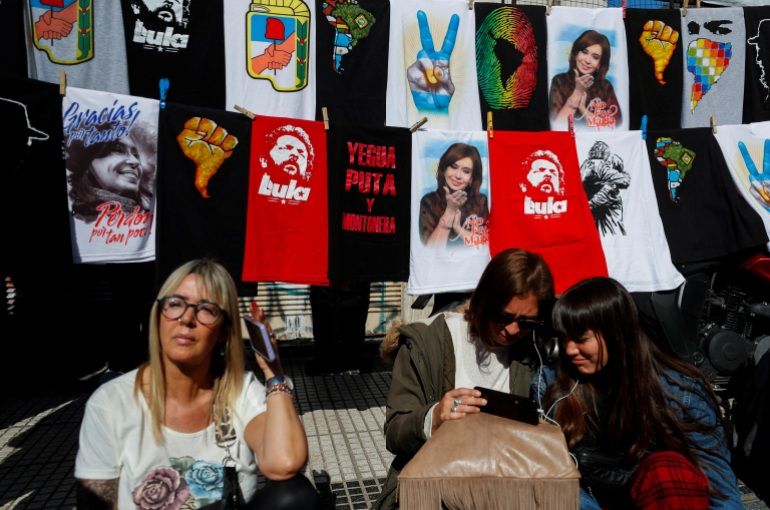 How does the public in Argentina feel about the case?

Like all things that have to do with the vice president, the Argentinian public is divided on the matter. On Monday, after the prosecution completed its closing arguments, supporters and detractors faced off outside Fernandez de Kirchner’s home in the posh Buenos Aires neighbourhood of Recoleta.

On one side, people hoisted banners that accused her of being a “thief” and banged pots and pans, while on the other, her backers sang political chants and jumped up and down in boisterous support. Police used tear gas and batons to disperse the Fernandez de Kichner supporters, in what her allies denounced as a show of excessive violence. A legislator for the ruling Frente de Todos coalition was briefly arrested.

Oscar Sanchez, a 60-year-old taxi driver, said he and much of the country was most prosperous during the Kirchner years and that the court case is about targeting an economic model. “I don’t trust the media or the judicial system, which is the most corrupt system there is here,” he told Al Jazeera. But Maria, a retired radiologist, fumed with anger at the vice president, whom she accused of stealing money. “I think the case against her is real,” said Maria, who declined to give Al Jazeera her last name.

Supporters gathered outside the National Congress on Tuesday and Fernandez de Kirchner came out on a balcony and sang chants with them.

What are the next legal steps, and how long could this process take?

The trial has already lasted three years, but there is still a way to go. Next, each of the 13 defendants will have the chance to make closing statements. They are each allocated three sessions for those closing remarks, and these will begin in September.

The local media is reporting that the panel of three judges may return a verdict as early as December, or it could stretch to March of next year.

Once that verdict is delivered, the parties have the right to appeal, first to the Camera de Casacion Penal and then ultimately to the Supreme Court. That potential final hearing in Argentina’s highest court could come as late as 2025.

Will Fernandez de Kirchner be allowed to remain in office?

The legal process has not impeded the vice president’s ability to hold public office, and will not prevent her from running in next year’s national election should she choose. That is because even if she is convicted by the Tribunal Oral Federal 2, the conviction must be “firm” — meaning all avenues of appeal must be exhausted — and it must come with a prison sentence before it can affect her ability to seek public office.

But a guilty verdict would certainly send shockwaves across the country. All her allies, including President Alberto Fernandez, came out this week denouncing the case as judicial and media persecution.

“Beyond the lack of evidence that the prosecutor demonstrated, the problem is that he started from a premise that said that she, as president, could not not know what was happening,” the president said. “All the crimes she is accused of are crimes that require intent, having wanted to do it.”

Several left-wing leaders in the region also threw their support behind her, while her opponents accused her of delay tactics. “Instead of defending herself against the accusations, she talks about something else entirely,” Patricia Bullrich, the leader of the opposition PRO party, told the media. “It will be up to the court to decide whether what the prosecutor has said is sufficient or not.”

There are currently five active judicial cases against Fernandez de Kirchner related to other allegations of corruption, and irregular use and disbursement of state resources. She has been acquitted or the courts have dismissed several other charges.