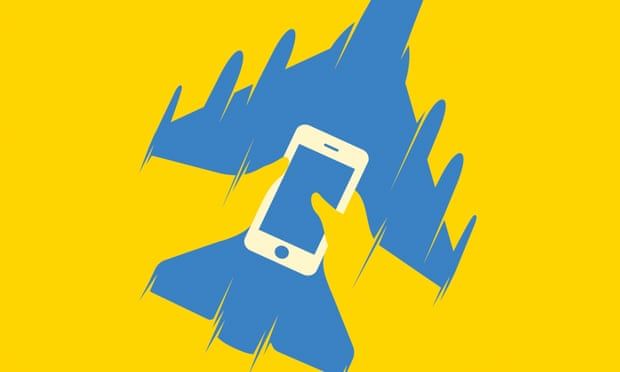 The big idea: can social media change the course of war?

What we see online can have real world effects, for good or ill
As Russia’s invasion of Ukraine has played out, the ubiquity of social media in the conflict has been striking. Alongside the information wars being fought by the governments, militaries and authorities involved, and the reporting from accredited journalists, there is now almost unlimited potential for ordinary people caught up in events to share their own experiences. First-hand testimony and images of atrocities such as those in Bucha or Mariupol can appear on our social media feeds in real time, popping up incongruously between viral memes and cat videos.

This tide of unfiltered (or barely filtered) information is immediate and constant. It certainly makes a difference to the level of engagement that individuals around the world may have with dramatic events, often far away. But might that feed back to affect the course of wars themselves?

The technological revolution of the last three decades has linked human experiences and interactions more closely than ever before. Around two-thirds of the world’s population – 4.9 billion people – now have access to the internet (a number that has risen significantly during the coronavirus pandemic, by around 800 million new users). An estimated 4.4 to 4.6 billion of those use social media such as Facebook, YouTube, Instagram, TikTok and Twitter.

Social media users do not just watch these events unfold in real time; they react to and interact with them. Gestures such as incorporating a Ukrainian flag into one’s username may be merely symbolic, but when users lobby politicians online, donate money, or even offer up their own homes to refugees, their engagement with the war begins to have real-world consequences. Invading Russian forces seem to be aware of the potential of social media: they have targeted Ukrainian mobile communications networks, launching a missile attack on Kyivstar’s hub in Okhtyrka on 11 March, and reportedly going after communications infrastructure in Mariupol as well.

Social media is not the first innovation to revolutionise perceptions of war. Over the last two centuries, advances in communication technology have brought war ever closer to those who are not in it. In 1855, near to the site of the current conflict in Ukraine, the Crimean war was the first to be systematically photographed. (A few daguerrotypes of the earlier Mexican-American war of 1846-48 were made, but this was nothing like as comprehensive as the documentation of the Crimean war.) British photographer Roger Fenton took hundreds of images of battle sites, troops and the aftermath of the fighting.

While today smartphone users can broadcast live around the world, he could not even take photographs of battles in progress: the exposure time for plates was at least 20 seconds. His photographs did not change the course of war, but they helped raise awareness of the needs of wounded soldiers returning home, and allowed civilians a much fuller understanding of the field of war than ever before. Fenton’s portrait of a battle-worn Lord Balgonie is considered by some to be the first image of shellshock. It stood in harrowing contrast to the romanticised portraits of military men to which the public was accustomed.
Advertisement

During the first world war, cinema provided a new medium. In August 1916, the British War Office released a feature-length film, The Battle of the Somme, mixing documentary footage with staged recreations. It was an extraordinary success: 20 million people saw it during its first few weeks of release. There was widespread anxiety, though, about graphic images of casualties, and whether exhibiting them turned war into a gruesome form of entertainment. The Manchester Guardian reasoned at the time about the disturbing footage: “This is what war means, and it is right that our people should be made to feel the horror of it and realise that it is not merely a lively game that goes on in newspapers.” Similar arguments about graphic images and videos continue on social media today.

In the 1960s, the conflict in Vietnam was described as the first “television war”, with combat footage broadcast nightly across the US. There is still debate among historians about the extent to which this affected public opinion. In February 1968, shortly after the Tet offensive, CBS anchor Walter Cronkite sombrely told his audience that “we are mired in stalemate”. President Lyndon B Johnson is said to have remarked: “If I’ve lost Cronkite, I’ve lost Middle America.” A few weeks later, he announced that he would not seek another term as president. There were many factors in turning American public opinion against the fighting, but Cronkite’s moderate assessment does seem to have had an impact on the commander-in-chief.

The war in Ukraine is not the first in the age of social media. More than a decade ago, the series of uprisings known as the Arab spring spread in part because of the speed and effectiveness of online communication. One Egyptian man was reportedly so taken by the role social media had played that he named his first daughter Facebook Jamal Ibrahim. More recently, the conflict in Syria has been described as the most socially mediated in history – at least, that is, until the invasion of Ukraine.

Every new communication technology has brought with it a debate on the ethics and credibility of wartime information. In Fenton’s most famous Crimean photograph, Valley of the Shadow of Death, cannonballs are thought to have been moved into the road to create a more dramatic composition. The use of propaganda by warring parties goes back to the ancient world, and social media is only the latest vehicle for this. But there are significant ways in which it does change the game. Among these is the sheer speed and quantity of information. That, in turn, has increased the need for swift and comprehensive counter-propaganda: information that may be true but is damaging to one’s own side must be discredited before it can take hold. Russian influencers on social media such as Telegram now respond immediately to any evidence of atrocities by declaring it fake or blaming it on Ukrainians.

Wartime information, however it is delivered, can affect decisions made by power-brokers and influence national – or global – public opinion. It may boost or lower the morale of troops, and of civilians caught up in the fighting. Social media advances on earlier technologies by radically increasing the speed of information delivery and the size of its audience, and by empowering individuals to share their own versions of events – for better or worse. As for the course of fighting itself, there is always more to the picture than information, however much of it is pumped out. The way a war unfolds may be swayed by the competence of leadership or troops, materiel, supply lines, the weather, or even luck. As generations of propagandists have already discovered, the facts on the ground may in the end disrupt even the most carefully constructed narrative.
#Coronavirus  #Facebook  #Johnson
Add Comment