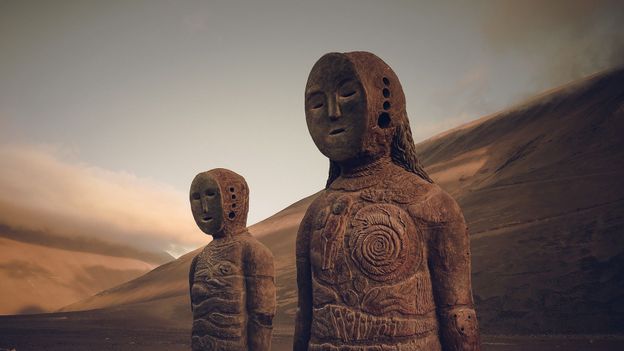 In Chile's Atacama Desert, the driest place on Earth, mummies have been found that pre-date the Egyptians' by 2,000 years. So while the Egyptians may be the most famous culture to mummify their dead, it turns out they weren't the first to do so.

"The Chinchorro are the very first people that inhabited the north of Chile and the south of Peru," said Bernardo Arriaza, a physical anthropologist with the University of Tarapacá. "They are the pioneers of the Atacama Desert." And, he added, they are also the first known culture in the world to mummify their dead, starting around 5,000 BCE.

The remains of hundreds of these marine hunter-gatherers – who lived on the Pacific Coast of the Atacama from approximately 5450 BCE to 890 BCE – have been found in the Arica and Parinacota regions. In 2021, these cemeteries were inscribed on the Unesco World Heritage List for the immense archaeological value they provide. Not only do they reveal the detailed mortuary and funerary practices of the ancient culture, but they offer insight into the community's social and spiritual structures. For instance, mummification was not reserved for the upper class of society (like it was for the Egyptians) but was a ritual for all.

As Arriaza explained: "The Chinchorro [culture] is relevant in many aspects: They are the first funerary practitioners, the earliest in this region. And the bodies that we know today as Chinchorro, they are true pre-Hispanic works of art. They are the artistic expressions of the feelings, of the emotions of the ancient populations."

But even though Unesco's recognition only came recently, residents of Arica have known about the unique archaeological remains for much longer. That's because the bodies are buried very close to the surface. Indeed, the remains are literally part of the town's foundation. For example, Johnny Vásquez, who has lived in Arica for 60 years, remembered that when workers first dug sewer pipes for his neighbourhood, they found "layers and layers of mummies". And in 2004, when workers started to excavate for a hotel, they ran into bones less than 1m underground and instead turned the site into a museum.

Hundreds of mummies have been uncovered so far, including those of infants and children. As Vivien Standen, a bioarchaeologist at the University of Tarapacá, explained, the soil here contains a lot of naturally occurring arsenic, which likely contributed to a high death rate for the population, as well as a large number of miscarriages. Scientists have also determined that the Chinchurro painted their bodies with manganese for, they think, traditional purposes – but as manganese is toxic, they were also inadvertently damaging their health.

Living on an ancient necropolis might seem unsettling, but Arica resident Marina Esquieros said no: "I'm not scared at all. Yes, I have a normal life here at home. I hardly think much that there are dead [bodies]."

Instead, locals see the deceased around them as their ancestors and themselves as their caretakers. "I feel that we are the continuation of the Chinchorros," said Alfredo Guerrero, another Arica resident. "In the last 10 years, I have felt, and I have told my family [this], that I am not going to leave this place. I will always remain, so I will always be visiting them."

Jorge Ardiles, a local diving fisherman, agreed. "They were fishermen just like us, and they were in this place. And after thousands of years, we came to settle here. Then we, as a community of fishermen… we have taken that, let's say, authority, that we consider ourselves as their heirs, and that is why we want to [preserve] the remains they have left, as a great legacy for the current community," he said. "We are the contemporary Chinchorros at this very moment."