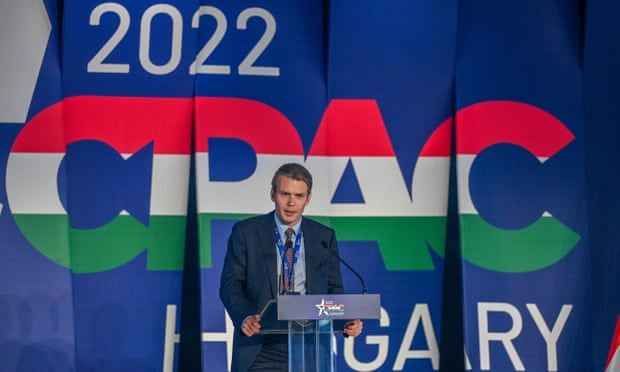 US conservatives are signaling their commitment to authoritarianism loud and clear by holding this year’s Conservative Political Action Conference in Budapest – the first-ever outside the US
In political analysis, sometimes the hardest thing is to see what’s staring you right in the face. Putin put in writing what he was going to do this spring – we just could not believe it, or we thought we’d prove our savviness by identifying some completely counterintuitive twist to the story of an invasion foretold. A similar challenge is posed by American conservatives communicating their commitment to authoritarianism loud and clear by holding this year’s Conservative Political Action Conference (Cpac) in Budapest – the first ever outside the US: the autocratic leader of Hungary, Viktor Orbán, is the main attraction, with plenty of European far-right party leaders as supporting acts. Could these American ingenues abroad just be duped by a leader intent on selling his kleptocratic autocracy as the last bastion of authentic conservatism or, as he likes to put it, real “Christian Democracy”? Maybe there’s some twist? Or perhaps, as Cpac’s hero Trump once proclaimed, it is what it is: from Tucker Carlson down, these figures are aware that Hungary has exited the democratic world; they just repeat the Orbán regime’s talking points when confronted with evidence for it. They end up cheerfully endorsing Vladimir Putin’s closest ally in Europe.

Orbán has long tried to promote his regime internationally as a model of “illiberal democracy.” The idea is that the leader enjoys overwhelming support from the people, while implementing a decidedly anti-liberal agenda in matters of immigration and social policy: rewarding people financially for procreation, legally cementing traditional notions of marriage and affirming the supreme value of the nation-state against “globalists” allegedly “opening all borders.” Such a stance has resonated with conservatives who felt that the right kept suffering endless culture war defeats in western Europe and North America; the ideology espoused by the self-proclaimed “plebeian” Orbán has also provided a template for a newly fashioned “national conservatism” that seeks to combine nationalism with state intervention in economy and morality.

Orbán’s self-declared illiberalism, just like Putin’s attacks on “obsolete liberalism,” laid a trap: instead of focusing on his party’s systematic capture of the state and economy – creating an oligarchy-friendly autocracy that in many ways resembles Russia – critics were dragged (or belligerently entered) on to Orbán’s preferred battleground: culture and morality. He and his allies could triumphantly charge that the very liberals celebrating diversity and tolerance were zealots determined to destroy conservative ways of life. Never mind that “liberal nihilists” (Orbán’s words) in Brussels do not dictate to EU member states how to regulate abortion or, for that matter, immigration – like so many far-right populists, Orbán has been adept at creating a community defined by imaginary common victimhood. Those allegedly intent on victimizing Hungary could change over time – one year, it was migrants, then George Soros, then Brussels. What had to remain constant was a sense of mortal threat, where national existence is at stake day and night.

Hungary (and Poland) have been lavished with attention by conservatives who, from the safety of prestigious chairs at North American universities, lament their status as victims of “cancel culture” and the alleged “soft totalitarianism” of the US left: the land of the Magyars became an anti-liberals’ Disneyland – where you can still tell who’s a man and who’s a woman! – or even, as a Hungarian government official put it, a “conservative safe space.” Voices that are ubiquitous in western debates – like British-born historian Niall Ferguson – would visit Budapest to bemoan the fate of free speech in US academia, suggesting that the situation had started to resemble Stalinist Poland. Such a performance of victimhood was all the more remarkable because it was staged in front of the very prime minister who had forced Hungary’s best university to leave (inviting a Chinese university to open a branch instead), radically reduced media pluralism (leaving a few tiny liberal outlets in place for the sake of plausible deniability) and reshaped the cultural scene in the name of promoting nationalist values.

It is tempting not to see things for what they are: perhaps all these intellectuals are just what used to be known as “useful idiots” – similar to the polit-tourists who went to the Soviet Union and came back with good news about workers joyously building socialism. But the latter were usually duped – whereas at least some of the conservatives enjoying their pálinka in one of Budapest’s Scruton cafes (named after the conservative British philosopher Roger Scruton) appear to know full well what is happening in their new favorite ideological holiday destination. They are simply willing to sacrifice democracy for the realization of their favorite Catholic natural law precepts, or for stopping what Orbán, among many other conspiracy theorists, identifies as the “great replacement” – substituting Muslims for the last real Christians on the old continent.

Critics are usually brushed aside with the charge that left-liberal Orbánophobes just happen to be frustrated that their desire for a “woke autocracy” remains unrealized in a far-away country about which they know little; to boot, they are accused of being not just intolerant, but, deep down, anti-democrats: after all, how can they call a man who has won four consecutive elections decisively (generating a two-thirds majority in parliament on each occasion) an autocrat? What’s more, how can they mind the fact that he is building up a middle-class constituency (or so the justification of corruption by Orbán’s in-house intellectuals runs) – or, if that doesn’t sound right, how about the fact that everyone is corrupt anyway, in eastern Europe?

If such rationalizations sound curiously Trumpist, that’s because they are. After all, the conservative and religious fellow travelers of the 45th president also were never short of reasons to excuse his power- and money-grabbing. Nobody is denying that Orbán has genuine followers, just like Trump does. Yet Orbán’s claim to a great democratic mandate is dented by the fact that recent elections, while being free, have been utterly unfair: the main opposition candidate was literally given five minutes on state TV during the entire campaign; state resources were shamelessly used to promote the governing party; and, not least, the electoral system is rigged in the incumbents’ favor. Contrary to the cliche of a crazy left cancelling anyone who disagrees, the problem is not that states cannot set their own immigration policies, or that there can be no debate about family policy – it’s that Orbán has unleashed one hate campaign after another, most recently with a government “protect the children” campaign associating homosexuality with pedophilia.

Had Trump ever built a political theme park, it may well have resembled Orbánistan. Hungary provides a preview of plans for the US – if one cares to look.
Add Comment