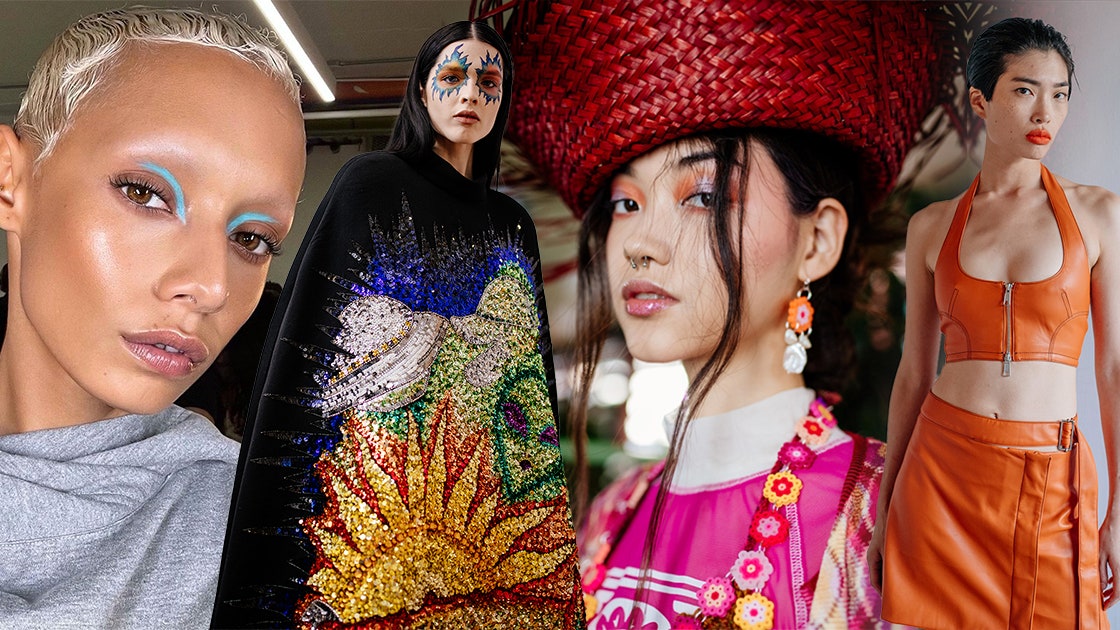 At long last, this New York Fashion Week season saw the return of in-person shows and presentations. And suffice it to say-just as was the case with the clothes-seeing head-swiveling beauty moments IRL was pure magic. The forecast for next spring saw all kinds of statements. Some were striking in their simplicity, like Ulla Johnson’s blossoming lips or Adeam’s earthy washes of terra-cotta on the lids, while others emphasized the endorphin-boosting powers of a bold statement, like the beaming, multidimensional color statements from Anna Sui and Rodarte, and Moschino’s cascades of brightly beaded box braids. Here are six beauty trends that emerged throughout the week.

A little embellishment goes a long way on the eyes. At Peter Do, silver-tipped tear ducts served as a futuristic pop against relaxed, minimalist clothes, while at Luar, razor-sharp cat-eyes received the ultimate punctuated accent from pearl decals placed above the inner corners. Gleam by way of a soft, shimmery finish was supplied at Anna Sui, where a slight amount of metallic on the center of the lids took tropical smoky eyes to another dimension. At LaQuan Smith, sexy winged eyes got the glitter treatment in rich ruby red and navy blue shades. And then at Tom Ford, glittering lids were the ultimate sultry statement.

True to larger-than-life form, Moschino served up not one, but two mic-drop-worthy ’90s-inspired hair moments: sky-scraping French twists and rainbow-beaded box braids. Hair reached similar heights at Christian Siriano, where looped plaited updos were woven with ribbon, and at Thom Browne, where towering and winding hair sculptures treaded into fantastical territory. Then at Collina Strada, an assortment of vivid, garden-fairy-meets-scene-kid looks provided endless subversive inspiration, from the acid-hued extensions to the undone, asymmetrical half-dos. 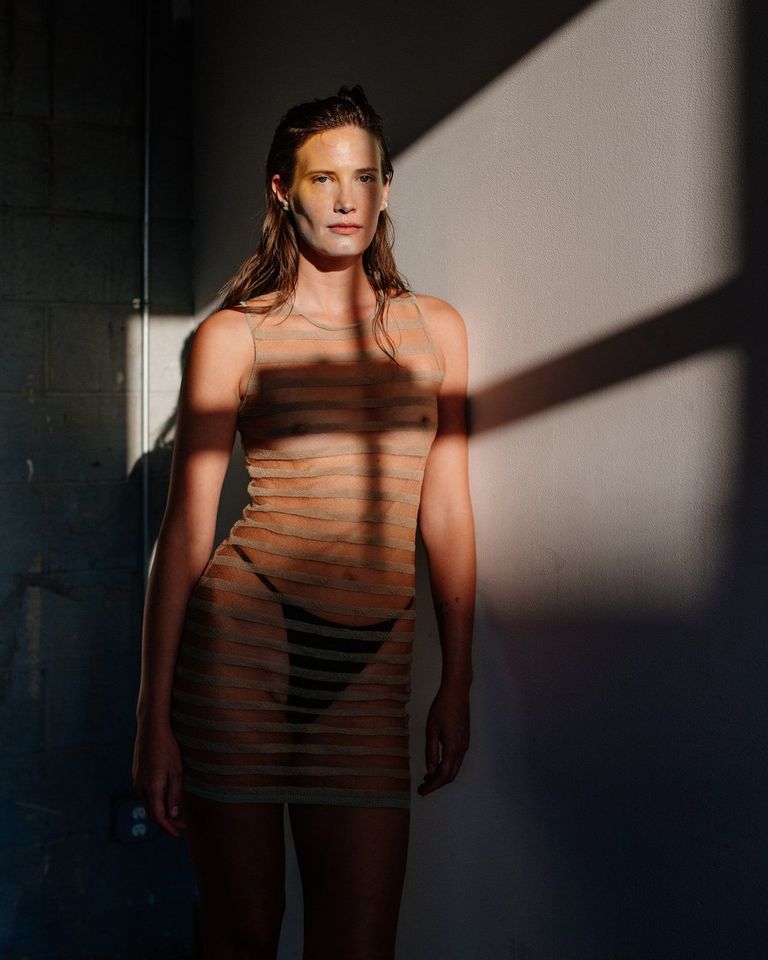 To amp up the fairy garden fantasy theme at Collina Strada, ears, hands, and feet saw shimmering strokes of tangerine, marigold, and chartreuse paint, while at Eckhaus Latta, select models saw a similar treatment with veils of watercolor-y, muted powder blue pigment on the face for a soft celestial glow. Then at Saint Sintra, in a nod to performance artist Leigh Bowery, brightly colored glitter was dripped along the contours of the face to abstract, sculptural effect.

Bright, energizing color was everywhere. On the most extreme end of the spectrum, Rodarte’s free-handed face designs, including an ombré green and blue sunburst, turned faces into the ultimate fine art canvas, while at Thom Browne, a single face was saturated in graduated stripes of rainbow along the forehead, cheeks, and mouth to trippy clown effect. There was also strategically placed neon, with three models receiving pops of fluorescent eyeshadow at Proenza Schouler, and the Maryam Nassir Zadeh lineup sporting graphic flicks of cobalt liner.

While spring is often associated with cheery brights, this season saw varying shades of earthy color like rust and cinnamon. At Adeam and Anna Sui, the tropical themes translated to terra-cotta lids, while at Ulla Johnson, warm dusty clay-color shadow was paired with soft washes of complementary tangerine on the center of the mouth in a blossoming shape. At Threeasfour, the pattern continued, where a few sets of arches received a color treatment in a muted ginger shade. Both Collina Strada and Altuzarra put forth sun-loved, bronzed and blushed cheeks, giving complexions a tawny touch. 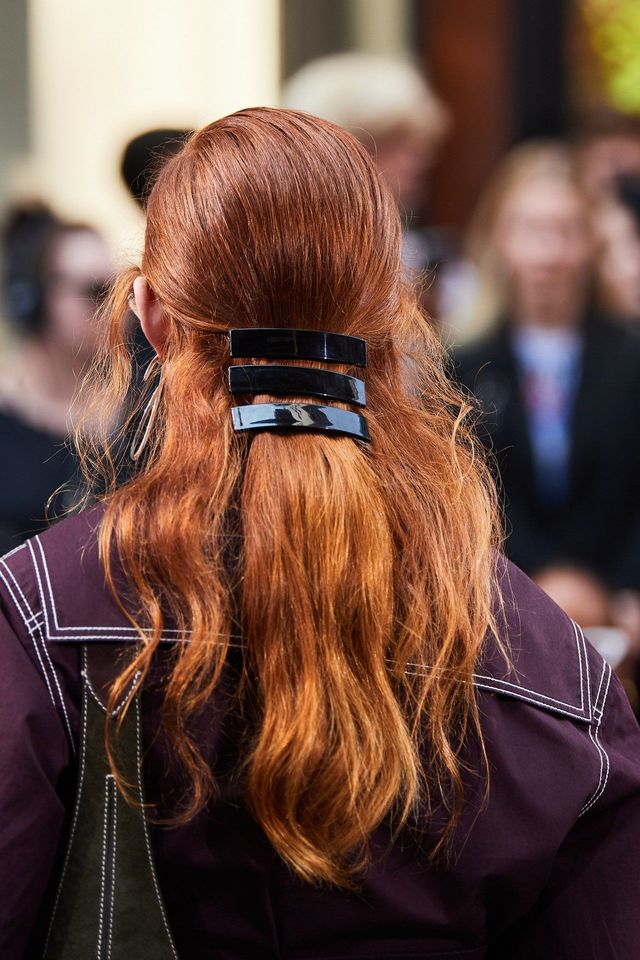 Leave it to Markarian to churn out a parade of stunningly beautiful hair accessories, from oversize bows to veiled headbands. The romance continued at Ulla Johnson, where an assortment of pearl-embellished golden hair baubles were fastened to intricate braids and loose waves alike. Maryam Nassir Zadeh offered a seamless accessorizing strategy, with chunky geometric barrettes fastened on the mid-lengths and towards the ends for a blithely cool touch. Then, on the final day of the week, Tory Burch supplied the chicest of stacked metallic and monochrome barrettes to add a dose of downtown polish to wispy half-ups, while Tom Ford showcased a series of utilitarian rhinestone-encrusted styling clips to top off the show’s slicked updos.