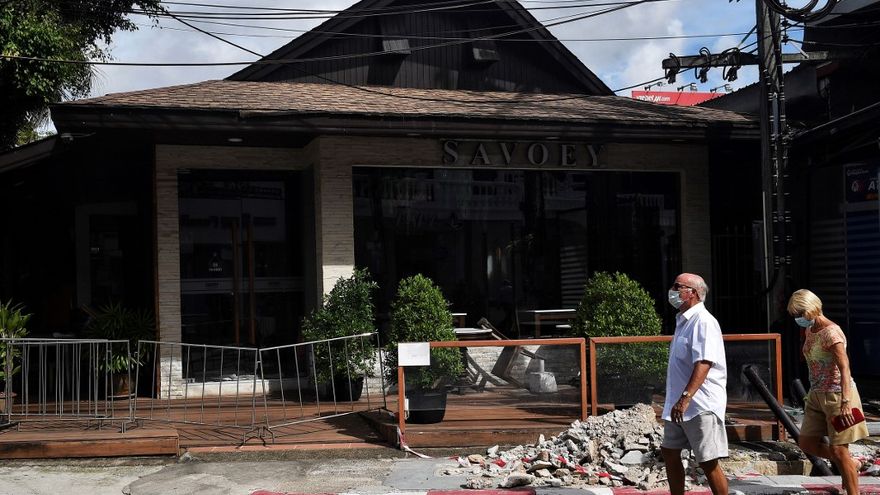 Deserted beaches, unopened shops and hundreds of hotels with their doors closed. Phuket, a prized tourist destination in Thailand, has not received foreign tourists for six months and its inhabitants are trying to organize themselves to survive the economic disaster.
Faced with the crisis, solidarity and ingenuity, because nothing suggests that tourists will return for now and concern grows with the imminence of the months that are considered high season in Phuket.

This is much worse than the 2014 tsunami, Kongsak Khoopongsakorn, owner of Vijitt Resort, a luxury residence complex that offers 85% lower prices, told AFP. The entire island has been affected and the impact of the coronavirus will be much greater in the long term, he adds.

The contrast with other seasons is staggering: Phuket, the most popular place in the Andaman Sea and Thailand's second destination after Bangkok, received more than 9 million visitors last year.

Currently, a strange species of sea turtles swim again on its deserted beaches, almost all of the 3,000 hotels are closed and in Patong, the center of nightlife, only 5% of the shops remain open.

It's a ghost town, says Preechawut Keesin, who owns a hotel with more than 600 rooms and five nightclubs.

In the neighborhood of prostitution, some bars prefer not to close for the moment to help their staff. We will not survive beyond the end of the year, says Jantima Tongsrijern, head of Pum Pui bar, where three young women dance without enthusiasm in front of empty tables.

Tourism generates 80% of the island's economic income and employs more than 300,000 people.

But months go by and tens of thousands of unemployed people have decided to return to their home provinces.

Those who stay on the island try to organize to survive: some have accepted significant cuts in their wages, others wait in long lines in search of food aid. And others have changed jobs and adapted to the situation.

And the future looks even more difficult.

The authorities wanted to carry out an experiment in Phuket and receive the first foreign tourists arriving in Thailand from April, but the plan is still being postponed.

The kingdom, relatively safe so far from the coronavirus (with just 3,622 cases and 59 deaths, reported, and a population of 69 million) interestingly fears the epidemic more than the economic crisis and prefers to give the image of a safe country, even if that means leaving millions of workers on the streets.

The first foreign tourists to set foot on the island, are at the moment looking respect a 14-day quarantine in certain hotels with quite high prices and undergo diagnostic tests first. These conditions will deter the majority of visitors, anticipate those responsible for the sector.

Before the crisis, Thais accounted for 25% of visitors to Phuket.

It's a disaster, we didn't win anything with this [lockdown]. It will take three years to get back to normal, predicts Kongsak Khoopongsakorn.
#Coronavirus
Add Comment