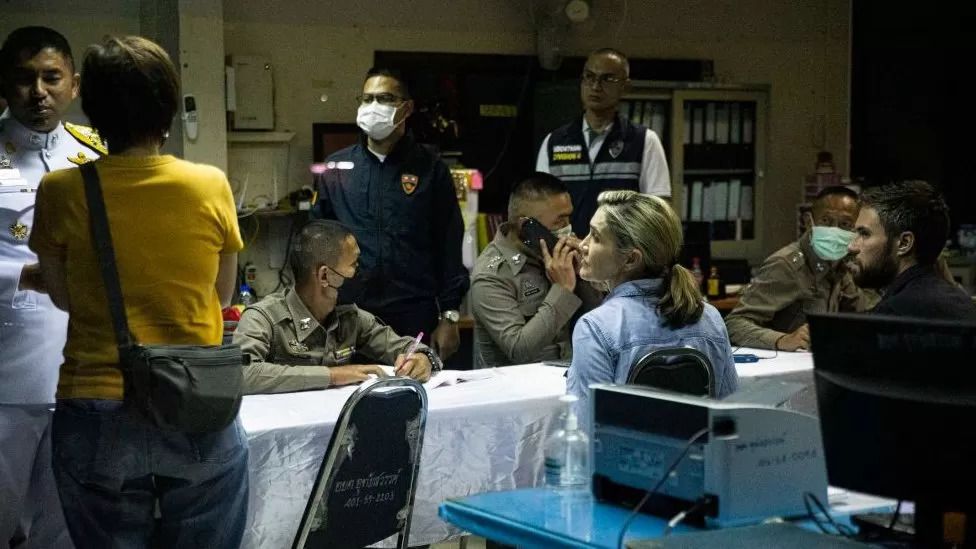 Two journalists from US news outlet CNN have apologised for their coverage of last week's attack on a childcare centre in Thailand that left 37 people, including 23 children, dead.
They entered the building where the attack occurred and filmed on site.

They were accused of trespassing and filming a crime scene without permission.

Both of them were later cleared of the charges, but fined for working as journalists while on tourist visas.

The journalists - reporter Anna Coren and cameraman Daniel Hodge - have agreed to leave the country. They have also apologised in a video that has since been widely circulated by local news outlets, and appeared to have been filmed inside a police station.

"My deepest apologies... especially the families of victims of this tragedy - we are so sorry to have caused you more pain and suffering," said Ms Coren, who along with Mr Hodge was fined 5,000 baht ($133; £120).

"We know your country is going through a painful time and we never came here to cause more grief."

Thai police investigated the incident after other journalists raised concerns. The Foreign Correspondents' Club of Thailand and Thai Journalists' Association issued statements criticising the CNN crew for " a serious breach of journalistic ethics in crime reporting".

"Would one of their crews have behaved in the same way at a serious crime scene in the United States?" the statement asked.

There was also a widely shared picture on social media from the weekend that showed a CNN crew member climbing over a low fence to leave the compound.

Ms Coren and Mr Hodge were later taken to the police station in Nong Bua Lam Phu province, where the attack took place, for questioning.

Two Thai ministers have said the CNN crew did not have official permission to enter the premises, but the police accepted that they believed they had permission and decided not to prosecute them.

CNN has issued two statements. In the first response, it said their crew were told by three public health officials that they could film inside. They said the premises had been cordoned off while they were inside, and they needed to climb over the fence to leave.

Police later found that village health volunteers had granted the team entry despite having no authority to do so, according to local news outlet The Nation.

In the second statement, CNN International's executive vice-president and general manager Mike McCarthy said the team entered the building "in good faith, to gain a fuller impression of what transpired inside and to humanise the scale of the tragedy for their audience".

He added they "deeply regret any distress or offense" the report may have caused, and said CNN had since stopped broadcasting the report and removed the video from its website.

Thailand is still in shock over the attack by a former policeman who stormed the childcare centre, killing children as young as two while they slept.

Police say the 34-year-old attacker - a local named Panya Kamrab - killed his wife and his step-son, before killing himself after a manhunt. The motive for the attack is not yet known.
Add Comment