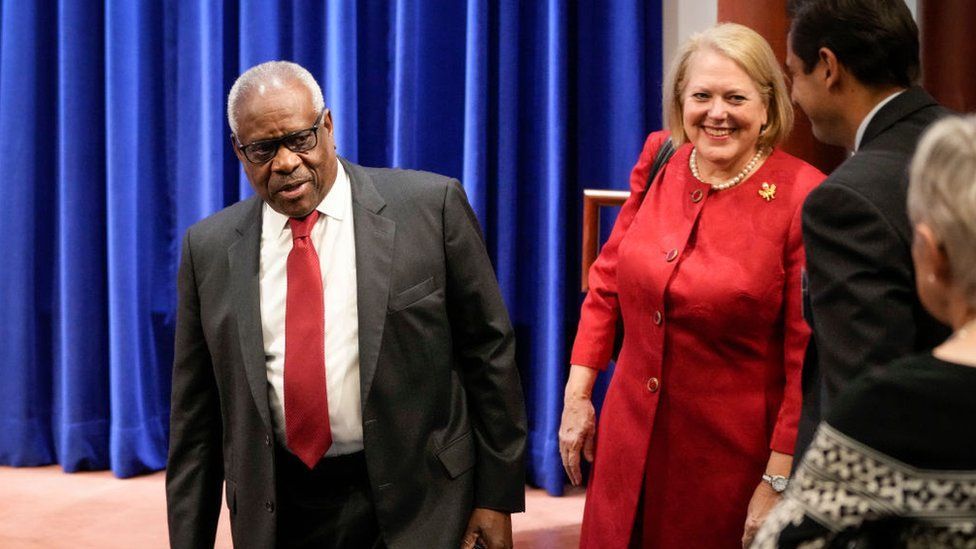 The wife of a US Supreme Court judge repeatedly pressed Trump White House staff to overturn the 2020 presidential election, US media has reported.

The texts are among 2,320 messages Mr Meadows provided to a committee investigating the US Capitol riot.

In the text messages, seen by CBS News and The Washington Post, she urged Mr Meadows, who was Donald Trump's chief of staff, to "make a plan" in a bid to save his presidency.

"Do not concede. It takes time for the army who is gathering for his back", she wrote on 6 November. It is unclear if Mr Meadows responded.

"Sounds like Sidney and her team are getting inundated with evidence of fraud," Ms Thomas wrote. "Release the Kraken and save us from the left taking America down."

Mr Meadows told Ms Thomas that he intended to "stand firm" and said that he "will fight until there is no fight left".

The Trump campaign later distanced itself from Ms Powell, after she made dramatic claims of voter fraud, without providing any evidence, at several media events.

Virginia Thomas - who goes by Ginni - is a prominent Republican fundraiser. She was formerly associated with the Tea Party wing of the party, a hard-line conservative movement to which Mr Meadows was also affiliated during his time in the House of Representatives.

She has been married to conservative-leaning Justice Clarence Thomas for 35 years, and has insisted her activist work has no influence on her husband's work with the Supreme Court.

In 2010, she made headlines for asking Anita Hill to apologise for accusing Mr Thomas of harassment during his confirmation hearings in 1991.

Clarence Thomas, who was released from hospital on Friday after suffering from flu-like symptoms, is the longest-serving member of the US Supreme Court, having served since 1991.

He is considered extremely influential in American law, but for much of his career rarely spoke or asked questions in court until 2016 when he broke a 10-year silence.

Since the Covid pandemic began, however, Mr Thomas has become more vocal and participates in most oral arguments.

In February 2021 the Supreme Court rejected Donald Trump's challenges to the elections result, however Mr Thomas dissented from the decision, calling it "baffling".

The revelation of Ginni Thomas's conspiracy-minded text messages have prompted critics on the left to call for Clarence Thomas to be impeached and removed from his lifetime seat on the Supreme Court.

They point to his lone dissent from the Supreme Court decision ordering the release of White House documents to the congressional committee investigating the 6 January Capitol attack as evidence that he was secretly protecting his wife, who was closely involved in efforts to overturn Donald Trump's election defeat.

Mr Thomas's defenders counter that he should not be held responsible for the activities of his spouse and, in any regard, there are no ethical rules that apply to high court justices.

The impeachment process for Supreme Court justices is the same as those for US presidents - a majority vote in the House of Representatives and two-thirds to convict and remove in the US Senate. That's an unreachable bar given the current partisan divide of the latter chamber.

In fact, only one US Supreme Court justice has been impeached by the House in US history. Samuel Chase was accused of political bias and misdeeds in 1804. He was acquitted in the Senate by a comfortable margin.