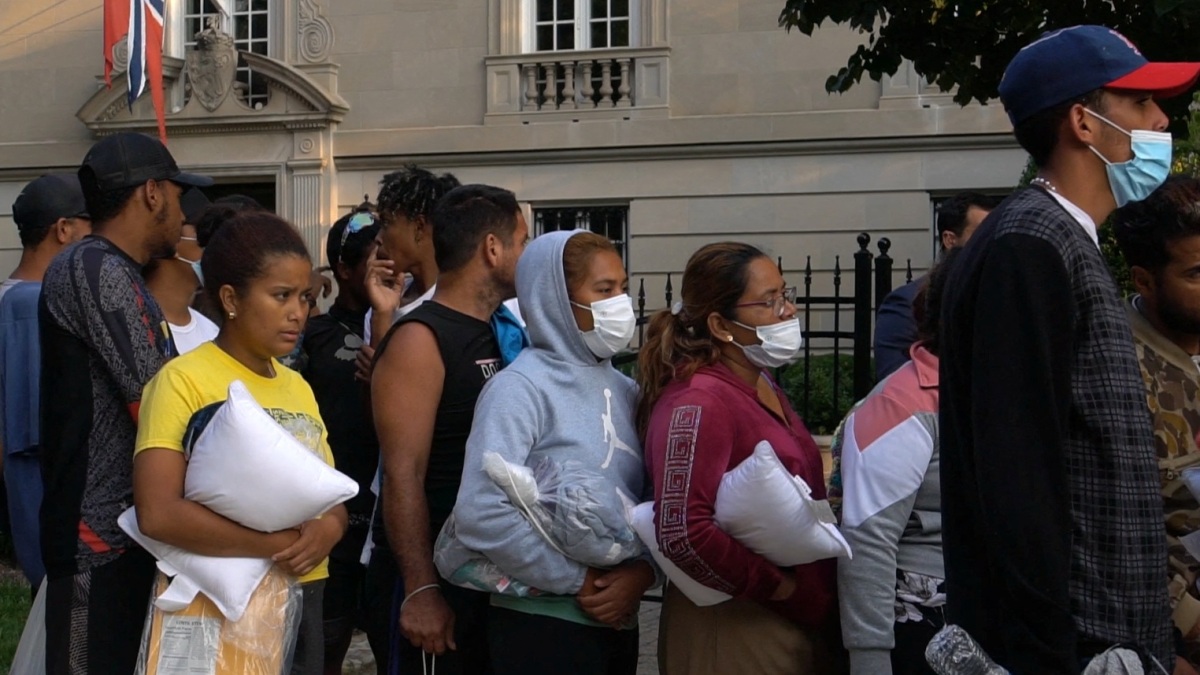 Migrants stood outside Kamala Harris’s residence in Washington, DC before aid workers guided them to a nearby church.

Two buses carrying migrants and asylum seekers have arrived near the home of United States Vice President Kamala Harris in Washington, DC, in what critics have denounced as an effort by Republicans to use migrants as “political pawns” ahead of midterm elections.

Greg Abbott, the Republican governor of Texas, said in a statement on Thursday that 100 migrants from Colombia, Cuba, Guyana, Nicaragua, Panama, and Venezuela were dropped off near Harris’s residence.

“Texas will continue sending migrants to sanctuary cities like Washington, DC until President [Joe] Biden and Border Czar Harris step up and do their jobs to secure the border,” Abbott said.

Harris was appointed last year by Biden, a Democrat, to lead his administration’s efforts to stem migration at the US’s southern border with Mexico, which has seen a surge in asylum seeker arrivals in recent months.

Al Jazeera’s Heidi Zhou-Castro, reporting outside of Harris’s home on Thursday, said about 100 people carrying only a few belongings came out of the buses after a journey that was longer than 30 hours.

She said an infant and another person who is diabetic were taken directly to the hospital. The others were taken to a nearby church where they were given food and shelter before volunteers assisted them in reaching their next destinations, Zhou-Castro said.

Aid workers who responded at the scene said “this was yet another humiliation that these people, who are trying to escape violence and poverty in Latin America, were made to suffer on a journey that is at times already dehumanising”, Zhou-Castro reported.

Since April, Abbott has been busing migrants out of Texas to Washington, DC, New York City and Chicago – cities with Democratic mayors – as part of a political strategy to denounce the Biden administration’s immigration policies, which Abbott argues are encouraging arrivals in his state.

The Republican governors say the effort is aimed at highlighting the record number of migrants trying to cross into the US through its southern borders, and to share the burden of hosting asylum seekers.

Texas is often the first destination for migrants crossing from Mexico, and Abbott has said that sending people to other parts of the country will provide relief to Texas border communities.

“We’re sending migrants to [Harris’s] backyard to call on the Biden administration to do its job & secure the border,” he tweeted.

Florida Governor Ron DeSantis, a Republican, also recently joined the effort. On Wednesday, he flew two planes of immigrants to Martha’s Vineyard, a wealthy summer holiday destination in the US state of Massachusetts.

“Martha’s Vineyard residents should be thrilled about this. They vote for sanctuary cities – they get a sanctuary city of their own,” Christina Pushaw, a spokesperson for DeSantis’s re-election campaign, said on Twitter.

“Sanctuary cities” is a term that refers to municipalities that do not cooperate with federal authorities seeking to detain or deport undocumented immigrants. 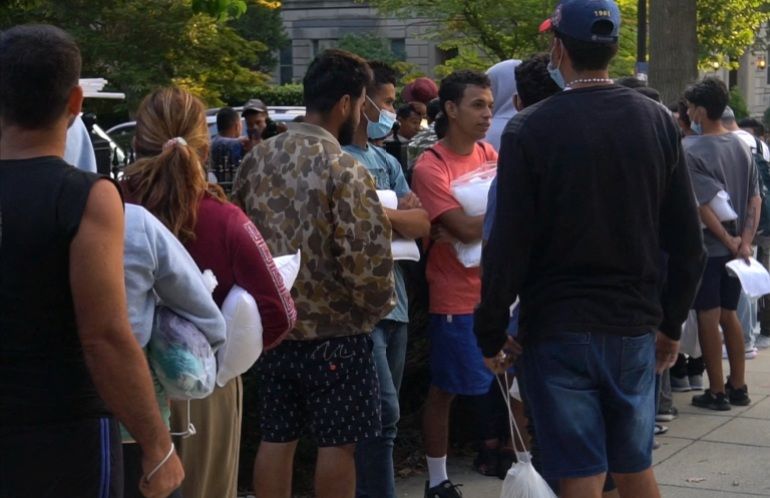 Texas Governor Greg Abbott has been busing migrants out of Texas to Washington, DC, New York City and Chicago since April

But several state and local officials, as well as migration rights advocates, have condemned the Republican effort as “evil and inhumane”.

Earlier this month, Chicago Mayor Lori Lightfoot accused Abbott of “manufacturing a human crisis” by sending “human beings — not cargo, not freight, but human beings — across the country to an uncertain destination”.

Massachusetts state Representative Dylan Fernandes, a Democrat who represents Martha’s Vineyard, said on Twitter that the immigrants had arrived without warning from Florida.

“Many don’t know where they are. They say they were told they would be given housing and jobs. Islanders were given no notice but are coming together as a community to support them,” Fernandes said on Twitter.

“Republicans who call themselves Christians have been plotting for some time to use human lives – men, women, and children – as a political pawns [sic]. It is evil and inhumane,” he also wrote.

The district earlier requested US National Guard assistance to help stem a “growing humanitarian crisis” prompted by the arrival of thousands of migrants, but the Pentagon rejected the request.