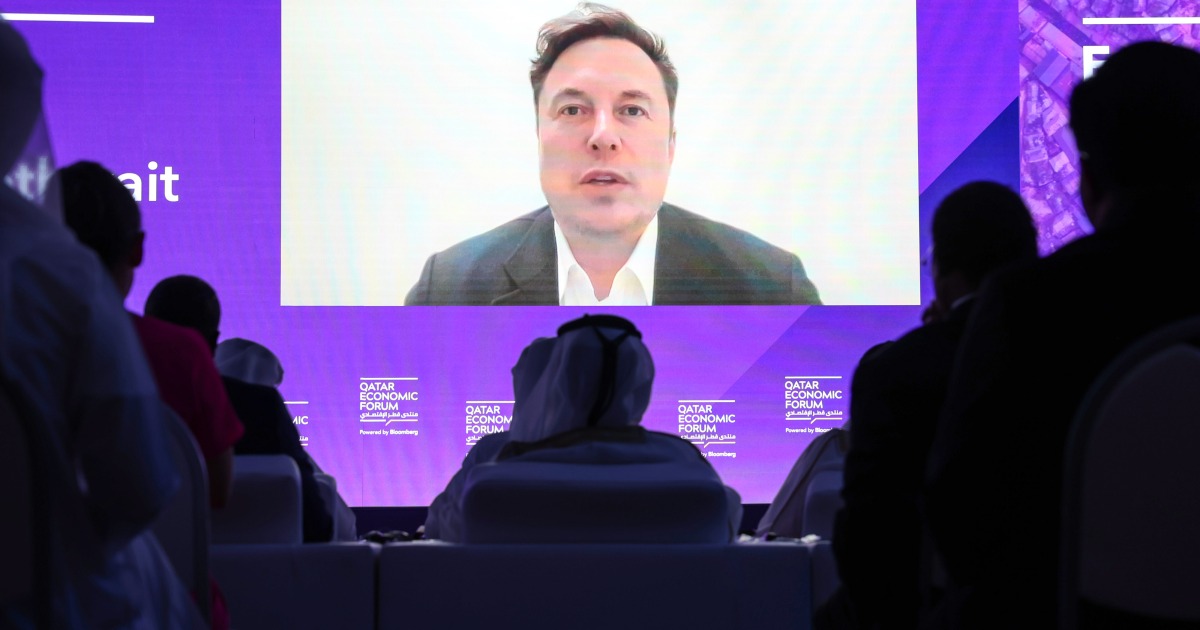 Tesla and Twitter on Musk’s agenda at Qatar Economic Forum

The Qatari Emir Sheikh Tamim bin Hamad Al Thani and businessman Elon Musk were among the speakers on the second day of the Qatar Economic Forum, as a global economic recovery after the 1COVID1-19 pandemic and rising challenges such as food insecurity and the need for energy diversification were high on the agenda.

“Supporting the economy and investments and innovation while keeping shared values and maintaining peace is the way to build capabilities to overcome the challenges that the whole of humanity faces,” Qatar’s Emir Sheikh Tamim bin Hamad Al Thani said in his opening remarks on Tuesday.

“Qatar is responsible as a partner in the global community to face the global change and its effect on humans,” he added.

The forum, which is hosted by Bloomberg, will focus on the need to diversify the world’s economy and develop the renewable energy sector, according to Al Jazeera’s Jamal Elshayyal, reporting from the event.

“But the forum is not just looking at things from a financial perspective, there is also discussion of adjacent topics such as the environment or the role of politics and human rights in developing economies,” Elshayyal said.

Appearing virtually at the event, Musk, the world’s richest person according to Forbes magazine, spoke about his recent offer to acquire Twitter and the issues surrounding the social media platform, including the number of spam users on the system and the coming together of the debt portion of the deal.

“We’re still awaiting resolution on that matter, and that is a very significant matter,” he said, reiterating doubts over Twitter’s claims that false or spam accounts represented fewer than five percent of its monetisable daily active users. “And then of course, there’s the question of, will the debt portion of the round come together? And then will the shareholders vote in favour?”

Talking about Tesla, the electric carmaker company he is chief executive of, Musk said that there will be a reduction of its salaried workforce by roughly 10 percent over the next three months. The cuts would amount to about a 3.5 percent reduction in total headcount at the company, Musk said.

His comment comes as two former Tesla employees have filed a lawsuit against the company alleging its decision to carry out a “mass layoff” violated federal law as the company did not provide advance notice of the job cuts.

The lawsuit was filed late on Sunday in Texas by two workers who said they were terminated from Tesla’s gigafactory plant in Sparks, Nevada, in June. According to the suit, more than 500 employees were terminated at the Nevada factory.

Musk played down the lawsuit as “trivial”. “Let’s not read too much into a pre-emptive lawsuit that has no standing,” he said.

“It seems like anything related to Tesla gets a lot of clicks, whether it is trivial or significant. I would put that lawsuit you’re referring to in the trivial category.”

At a different panel of the Forum, ExxonMobil CEO Darren Woods said it would take time for energy market volatility to end and expected three to five years of fairly tight oil markets. Woods added that the company had asked the United States government for a more efficient investment process and efforts to centralise carbon reduction.

The QatarEnergy CEO Saad al-Kaabi also announced that ExxonMobil is going to be the latest international company to join Qatar in the North Field Expansion project.

Qatar is partnering with international companies in the first and largest phase of the nearly $30bn expansion that will boost Qatar’s position as the world’s top LNG exporter.

The two companies are expected to sign a deal later on Tuesday.

The move comes after TotalEnergies, Italy’s Eni and ConocoPhillips also joined QatarEnergy on the project.

Touching on global finance, Kuwait Investment Authority’s (KIA) Managing Director Ghanem al-Ghenaiman is waiting for a further expected decline in global markets before deploying investments and believes that will happen before the end of the year.

Ghenaiman said he believes markets will “go down further from here”.

The KIA sovereign wealth fund has more than $700bn in assets, according to the Sovereign Wealth Fund Institute. It manages two funds – one is a nest egg for when oil prices run out, the other is used to cover Kuwait’s budget deficit.

On the sidelines of the event in Doha, Kuwait Petroleum Corporation chief said the Gulf producer had the capacity to reach its OPEC quota and was moving to its first offshore production as it invests to meet future oil demand.

“We are making the investments necessary to ensure that we can meet any new increases in terms of allocations and also in terms of demand,” Sheikh Nawaf Saud al-Sabah said. “We always like to maintain spare capacity about 10 percent to 15 percent above where we need to be just in case of supply disruptions around the world.”

Kuwait received its first offshore rig a week ago and it will be ready to begin drilling soon, he said without giving a precise timescale.

“We’ve been producing onshore for almost 90 years now and now we’re moving on to the offshore for the first time,” he said. “We should have good news on that sometime soon.”