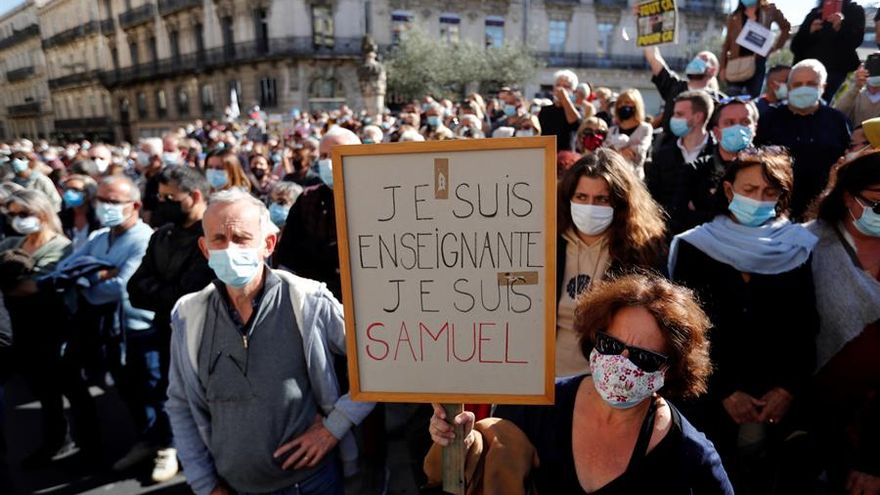 Tens of thousands of people demonstrated in France on Sunday in tribute to Professor Samuel Paty, who was beheaded by 18-year-old refugee boy on Friday for teaching his students cartoons of Muhammad, an attack that shocked the country.
Police killed the teen Friday afternoon in Éragny, the same Paris suburb where Paty's body was found.

Paty had taught a class on freedom of expression, during which he used caricatures of the Islam prophet taken from Charlie Hebdo, sparking controversy in the weeks preceding his death, authorities said.

In Paris, protesters gathered in the iconic Republic Square, the epicenter of the huge march on January 11, 2015 following the attacks against the satirical weekly Charlie Hebdo and a kosher supermarket.

The protesters paid tribute to Paty with handwritten banners with phrases such as "Je suis prof" ("I am a teacher"), "No to the totalitarianism of thought" or "Freedom of expression, freedom to teach."

Other tributes were also celebrated in large French cities such as Lille (north), Lyon (east) or Nice (southeast).

Several leaders of the main political parties were present in Paris: Prime Minister Jean Castex, the socialist mayor of the capital Anne Hidalgo, the right-wing president of the Paris region, Valérie Pécresse, or the leader of the radical left Jean-Luc Mélenchon .

The former head of state, the socialist François Hollande, also joined the demonstration.

Some of those present carried banners with cartoons of Muhammad published by the satirical weekly Charlie Hebdo. They also sang the French national anthem.

Guigané, 34, and a sociocultural mediator in the Paris region, with her 4-year-old son on her shoulders, came to pay tribute to Paty, and to denounce "this hateful and frightening act." "We must not allow this violence to settle, become our day to day or get used to it," she said.

On Friday afternoon, Samuel Paty, a 47-year-old father of a family, was beheaded near the secondary school where he taught History and Geography, in a quiet neighborhood of Conflans Sainte-Honorine, 30 km northwest of Paris. The attacker, an 18-year-old man, was killed by the police.

This assassination deeply shocked the country, three weeks after an Islamist attack in which a Pakistani wounded two people with a knife in front of the former premises of Charlie Hebdo, and in the midst of a debate on religious separatism.

On Saturday, in Conflans Sainte-Honorine, a thousand parents, elected local politicians or anonymous citizens, gathered in front of the school where this motivated teacher worked and close to his students, according to those who knew him.

The students also seemed very affected, like Marie, who went to her old school to lay some flowers in "homage to her former teacher."

I remember his class on freedom of expression. We talked about Charlie, we made some drawings that are still hanging, explained the young woman with excitement.

On Wednesday a national tribute will be held in coordination with the professor's family, announced the Elysee, without specifying the place.

According to anti-terrorist prosecutor Jean-François Ricard, the history teacher had organized a debate with his students in a civics course, during which he showed cartoons of the prophet Muhammad. Before, he would have invited the students who wanted him out of the classroom.

The 18-year-old boy who killed the teacher, showed his outrage towards the class in several videos, and posted the teacher's name and the school's address on the internet. He also met with the principal to ask for the teacher's dismissal. The professor later received several threatening calls.

The assailant was identified by the police as Abdoullakh A., an 18-year-old Russian from Chechen, born in Moscow and a refugee in France with his family. He had no criminal record, although he had committed a minor offense.

On his phone, investigators found a message addressed to Emmanuel Macron, whom he called "the leader of the infidels", and in which he explained that he wanted revenge on the person who "dared to belittle Muhammad", and the photo of his beheaded victim. Some content that had also been published on Twitter.

In talking about him, his neighbors described a "discreet" young man, "steeped in religion" for three years.

Through its embassy in Paris, Moscow insisted that "this crime has nothing to do with Russia," since the young man left the country as a minor.

A total of 11 people were arrested since Friday, especially his parents, grandfather and younger brother, among others.

The wave of religious attacks in France, which began in 2015, caused 259 deaths.

Oh ya 140 days ago
Well what did they expect? You welcomed them in and you are going to pay the price until you send them all back. These animals live in a different century than the rest of the world. They never moved on passed their leader mowhoever
View all comments (1)Add comment