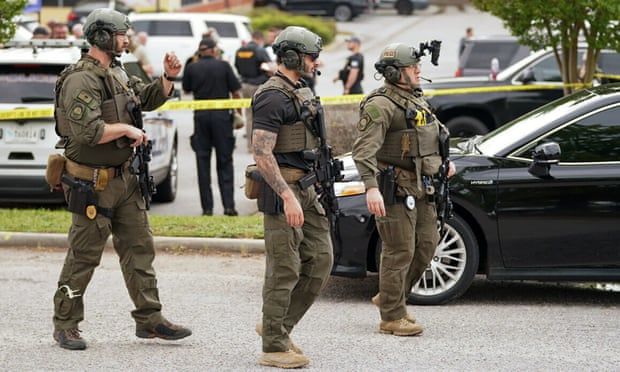 Police detained three people but stopped short of calling them suspects, saying the shooting arose from a personal dispute

The wounded ranged in age from 15 to 73, and first responders brought eight to the hospital, said the Columbia police chief, William Holbrook. Two of those brought to the hospital were in critical condition, with six being reported as less critically wounded, Holbrook added.

Another two people who were shot brought themselves to the hospital, while two others suffered wounds that weren’t related to the gunfire, but resulted from a stampede caused by the shooting, bringing the total number of injured to 12.

Holbrook said police detained three people following the shooting but stopped short of calling them suspects. At least one of the three fired a gun, and all three had weapons, Holbrook said.

Holbrook said the shooting appeared to erupt from a dispute involving people who knew each other.

“We do not believe this was random,” Holbrook said. “We believe that the individuals that were armed knew each other. There was some type of conflict that had occurred that resulted in gunfire. This was not a situation where we had some random person show up at a mall to just try and fire to injure people.”

Officers were searching the mall to let people who hid inside during the shooting know that it was safe to emerge. Those who were separated from loved ones amid the chaos were also being brought to a reunification center at a hotel down the street from the mall.

The shooting occurred at the Columbiana mall, about 10 miles from downtown Columbia.

It happened after at least two other high-profile shootings injured numerous people elsewhere in the US.

One, on 3 April, left six dead and 12 injured in Sacramento. The other, on Tuesday, left 10 with bullet wounds on a New York City subway. Both of those shootings have since resulted in arrests.