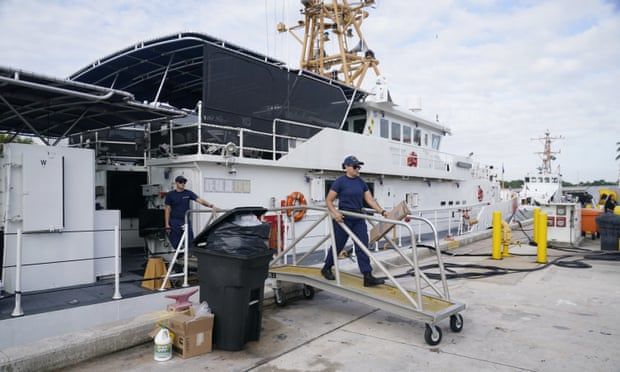 Incident is latest calamity as migrants from Dominican Republic and Haiti increasingly try to cross treacherous smuggling route
Federal authorities detained 17 Dominican migrants on Friday after their boat capsized near Puerto Rico’s north-west coast in the pre-dawn hours, with the US Coast Guard searching for an estimated 10 others still missing.

Jeffrey Quiñones, a Customs and Border Protection spokesman, told the Associated Press that those detained told officials that a total of 27 people were onboard the boat that struck a rock and turned over near Shacks Beach in Isabela.

“There are no indications that they have drowned,” he said of those still missing.

The boat, known as a Yola, overturned about 75 yards (69 meters) from shore, a US Coast Guard spokesman, Ricardo Castrodad, told the AP. He said authorities received a 911 call from somebody who heard the migrants splashing and running.

No migrants have been rescued at sea, although he said the Coast Guard will continue looking.

The incident comes a day after the Coast Guard suspended a search for an estimated 34 migrants who went missing in waters off Florida, with five bodies found. They were onboard a boat that left Bimini, a chain of islands in the Bahamas that lies just east of Miami.

A lone survivor, a Colombian, was found clinging to their boat off Fort Pierce, Florida. He said he and 39 others had departed Bimini for Florida. Authorities have not released their nationalities.

Separately, a Coast Guard cutter repatriated 94 Dominicans to the Dominican Republic on Thursday, following the interdiction of two other smuggling vessels near Puerto Rico.

Migrants from the Dominican Republic and Haiti have increasingly tried to cross the treacherous 92 miles (148km) of water known as the Mona Passage that separates the island of Hispaniola that both countries share from Puerto Rico. It has long been used as a smuggling route, with many migrants drowning or dropped off at craggy, uninhabited islands near the US territory who have to be rescued.

Quiñones said 449 Haitians and more than 200 Dominicans have been detained since the start of the fiscal year on 1 October. Other migrants detained so far this fiscal year include 38 Venezuelans and 19 Cubans, and a handful of migrants from Brazil, Romania and the Dutch Caribbean territory of Sint Maarten.

A total of 716 migrants have been detained by the border patrol sector in north-west Puerto Rico since 1 October, compared with more than 600 detained for the entire fiscal year 2021 and 356 for the previous year.
Add Comment