Messaging service Telegram is hosting channels peddling fake blank COVID-19 vaccine cards, immunization records, and fit-to-fly certificates, BuzzFeed News has found. These channels, ranging in size from 1,492 to at least 13,292 subscribers, are targeting people “who need the cards but [are] not willing to take the vaccines.”

“Avoid the Vaccine, Stay safe,” wrote one merchant in a channel they created with 5,773 subscribers. “If you need the Covid vaccine cards, write to us and we’ll get you one.”

“Watch out and stay away from the vaccine its poisonous,” wrote another in a channel they created with 13,273 subscribers. “Kindly pass out the message to those who are still blind out there, so many secrets are hidden from us. The minority ruling are trying to destroy mankind.”

An FBI public service announcement from March noted that it's illegal to buy or sell fake vaccination cards, per a US code that prohibits the creation, use, or distribution of fake government documents.

“By misrepresenting yourself as vaccinated when entering schools, mass transit, workplaces, gyms, or places of worship, you put yourself and others around you at risk of contracting COVID-19,” the FBI announcement says. 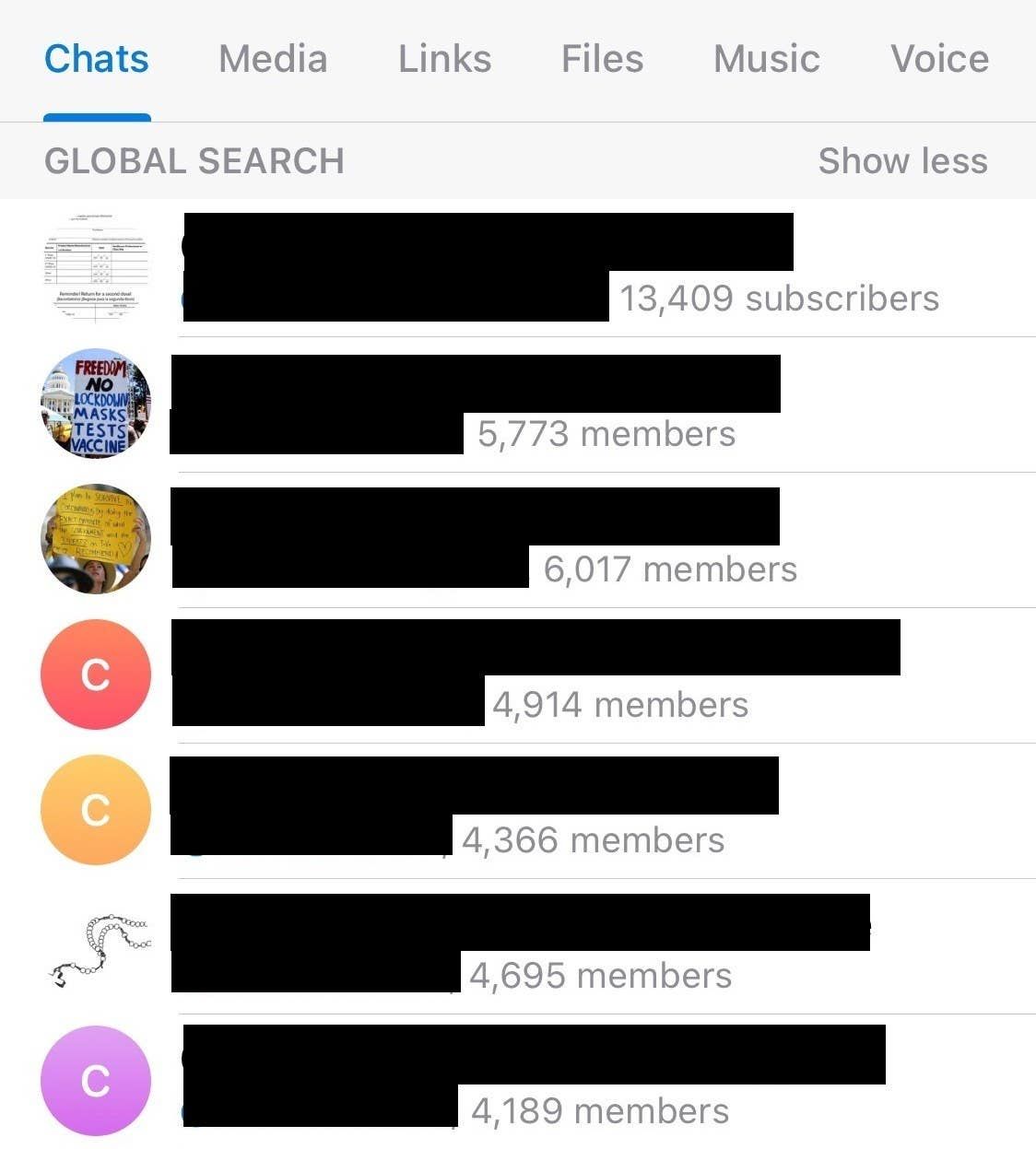 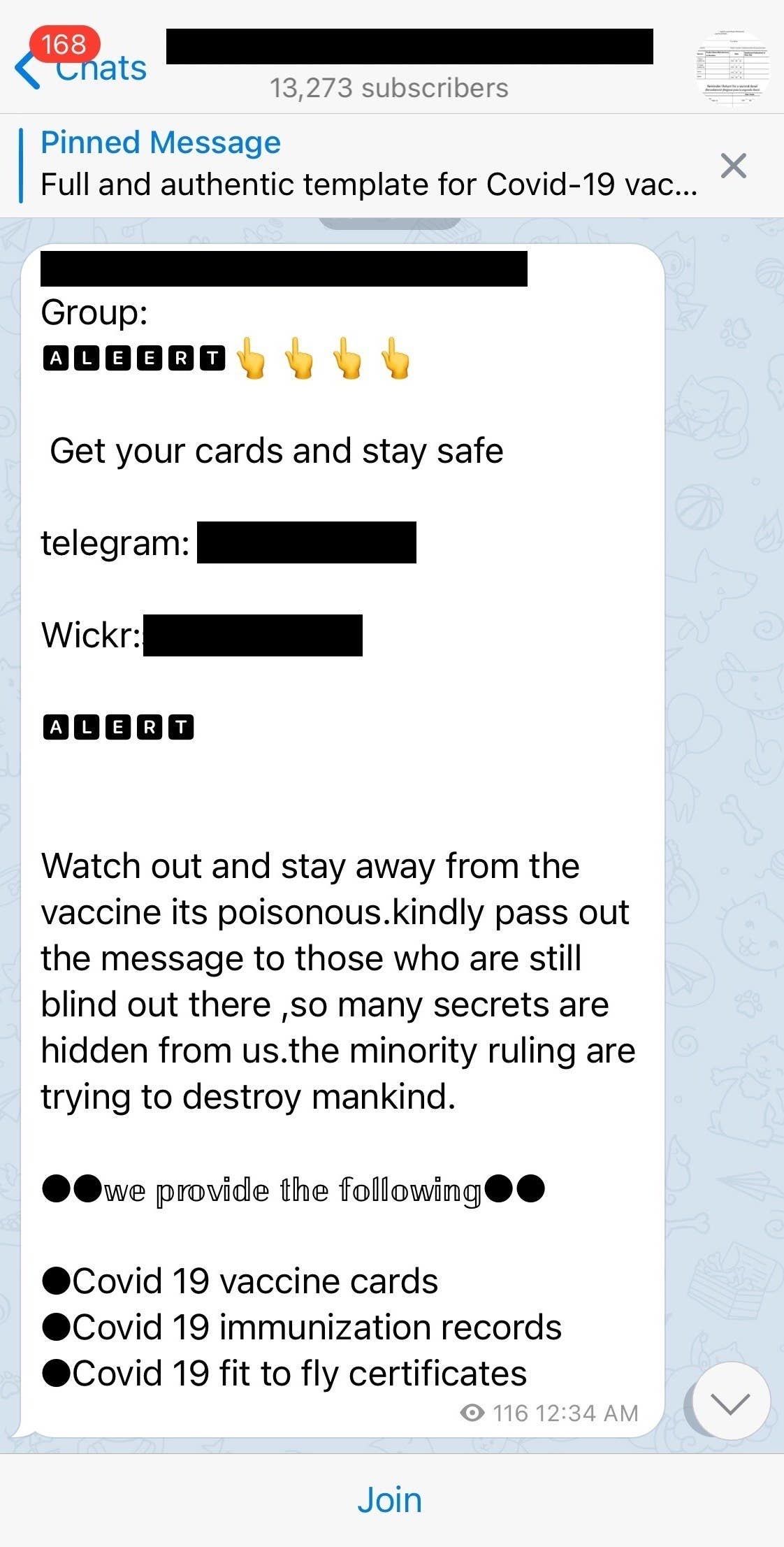 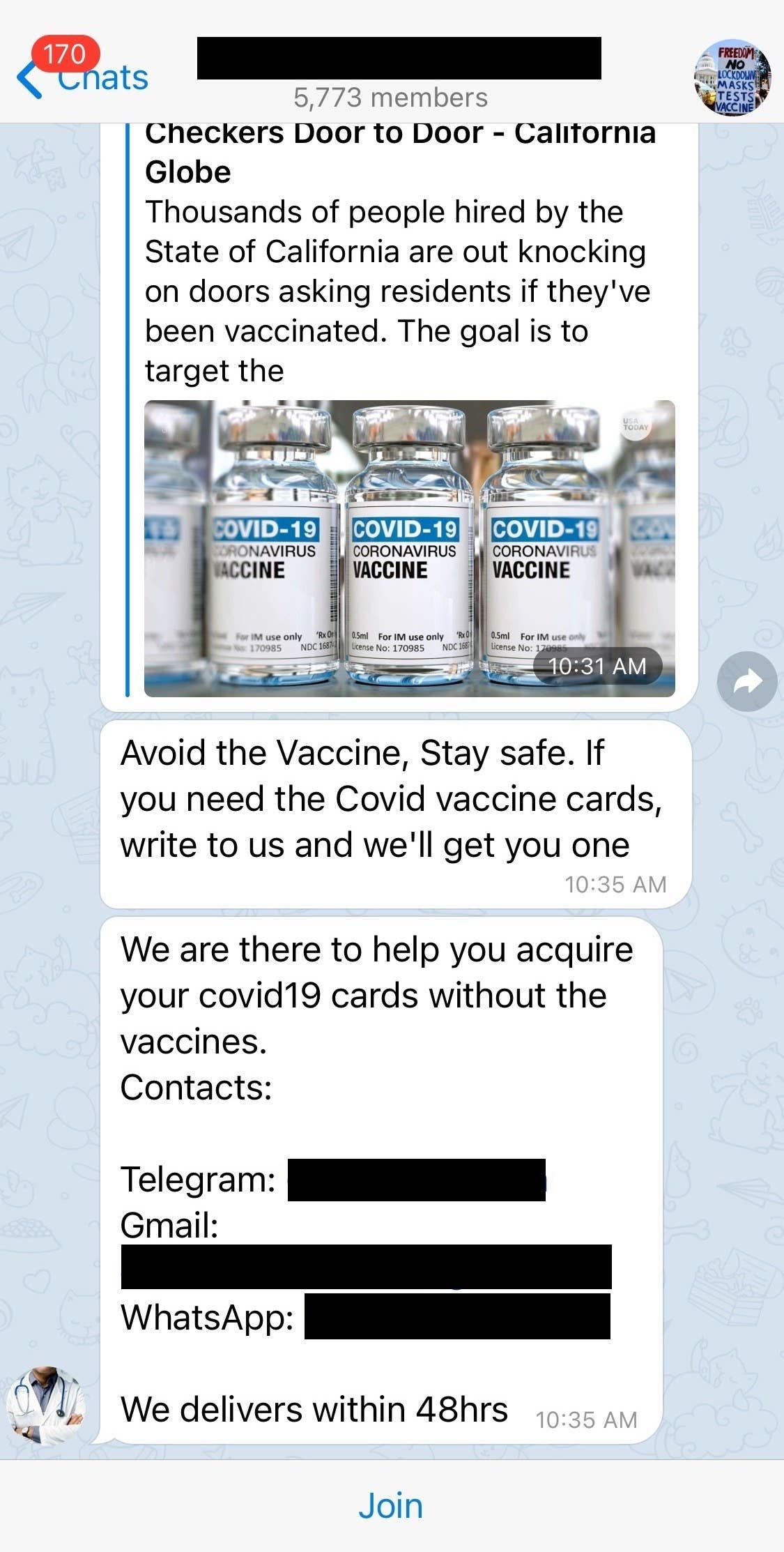 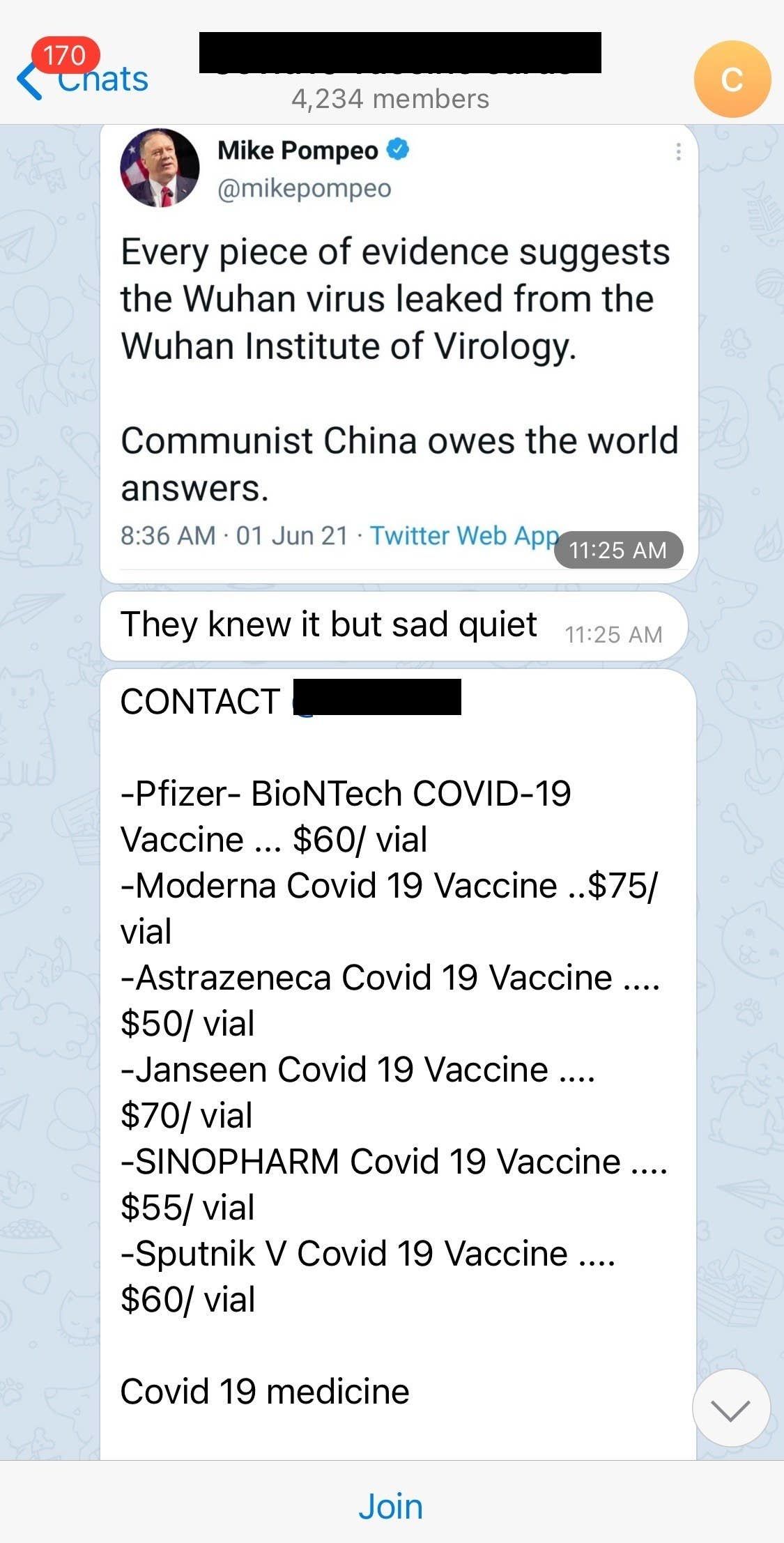 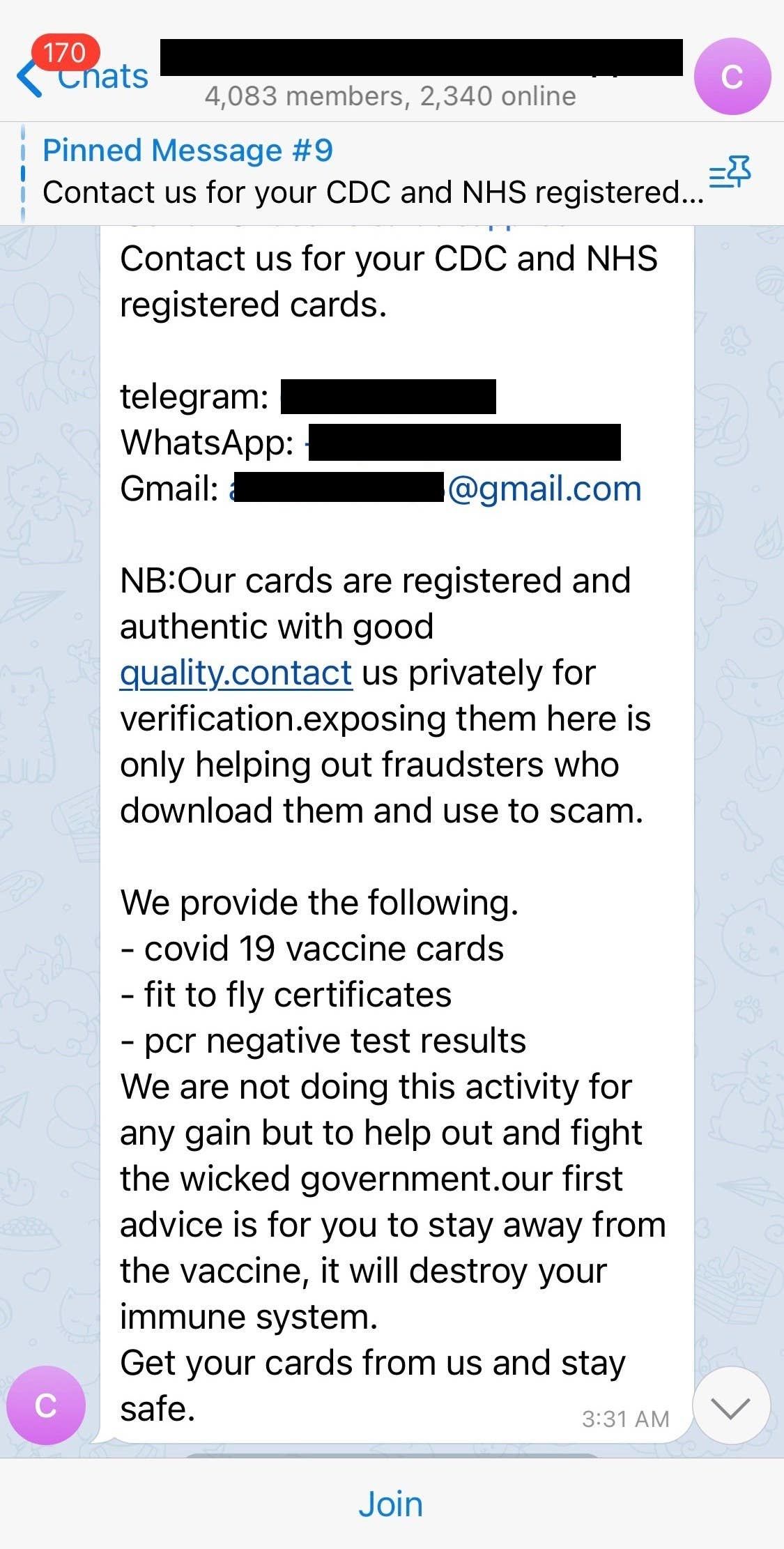 It’s not unusual for people to use Telegram to sell illegal goods. But selling fake American vaccination cards presents a unique risk, undermining ongoing efforts to keep a pandemic in check that has so far killed nearly 600,000 people in the US. It also hurts efforts by states and businesses that rely on accurate vaccine documentation as a condition of allowing access to certain locations and services — bars in New York City, for example, or certain international flights.

These bogus vaccine card accounts typically ask interested parties to contact the channel owner privately in order to purchase the cards and arrange shipment. It’s unclear how many purchases have been made, but some of these accounts have been active for months. For instance, “Covid19 Vaccines cards,” which has 8,587 members, has been around since April. Another group features several posts from customers who claim to have purchased fake vaccine cards.

”Thank you so much Dr philip we received the cards and my family is so happy right now,” wrote a user called mr Jones on May 30 to a group with 4,780 subscribers. “We have been duped so many times trying to get this and we had doubts about you too. We are sorry for that. We just wanna say thank you once more.” 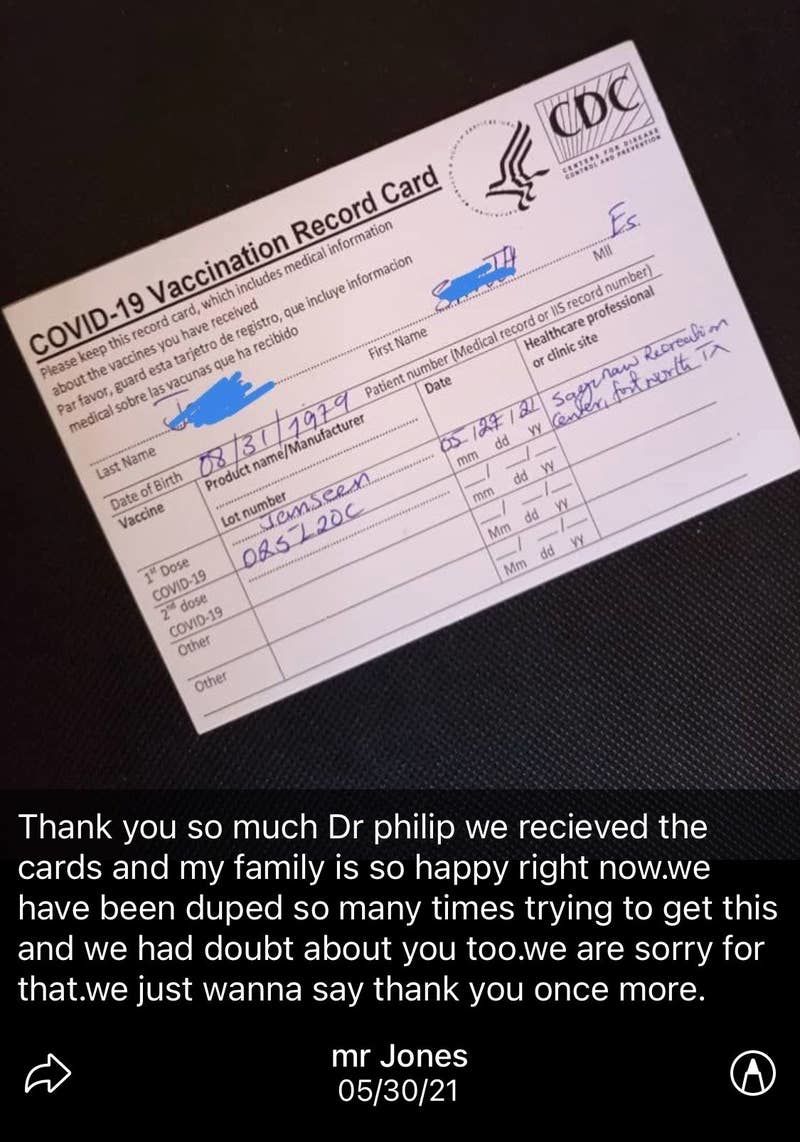 At least one of these Telegram channels, which has 8,587 members, has previously been used to disseminate anti-vaccine disinformation — including memes about Microsoft cofounder Bill Gates, Dr. Anthony Fauci, and vaccine injuries. “Get your cards now and keep your DNA unchanged,” wrote creator @drjg_covid.

Telegram isn’t the only platform hosting fake vaccine card merchants. As Motherboard first reported, they have been easy to come by on Etsy. Ads for similar cards and stickers, produced by custom merchandise company Redbubble and marketplace website Bonanza, continue to appear in Google Shopping. And searches for “blank vaccination card” on Amazon, which explicitly forbids selling "real or replica" COVID-19 vaccination record cards, were returning results for them alongside other vaccine-related products earlier today. 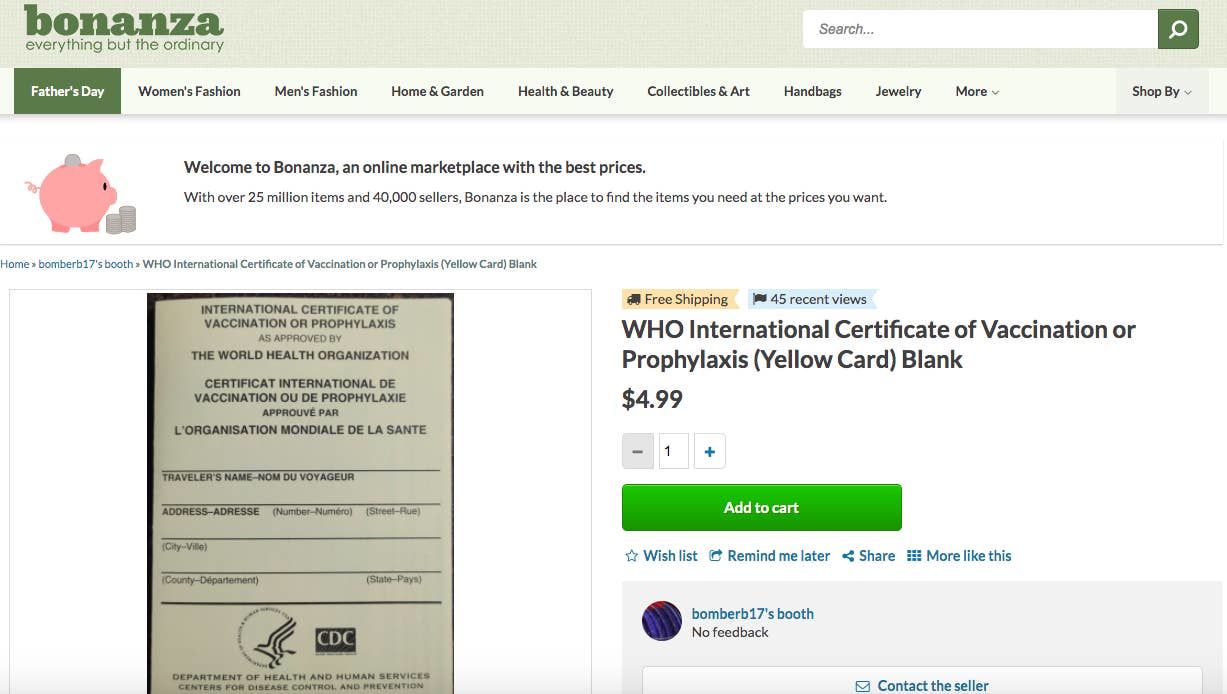 After publication, a Google spokesperson told BuzzFeed News that the Redbubble and Bonanza products were removed from Google Shopping search results.

"Early in 2020, we implemented a sensitive event policy for Covid-19, blocking most offers referencing the virus, to protect people from bad actors attempting to capitalize on it," the spokesperson said. "As an additional layer of protection, we also do not show Shopping offers on the vast majority of Search results related to Covid-19. We continue to actively track new trends and patterns of abuse, adapting our enforcement in real-time to stop fraudulent behavior. "

One Amazon listing for blank vaccine cards claimed they could be used for “quick entry” at airlines, and that people can “use and reuse for a health record keeper.” The manufacturer, a company called Snellspy with an address in China, claimed they are “Great for Teachers, Students, Nurses, Office Employees, Doctors, Government Official[s], Police, Volunteer[s] and More.” The listing disappeared shortly before this story was published, but the seller of Snellspy cards was fielding questions from curious buyers as recently as June 2. It’s unclear exactly how long the listing was up.

“We have proactive measures in place to prevent prohibited products from being listed and we continuously monitor our store,” an Amazon spokesperson told BuzzFeed News. “In this case, we have removed the items and taken action on the bad actors involved in bypassing our controls.”

If someone was thinking about buying a fake vaccination card, what might they also consider buying? Donald Trump–themed Christmas ornaments, according to Amazon’s “Buy it with” recommendation. 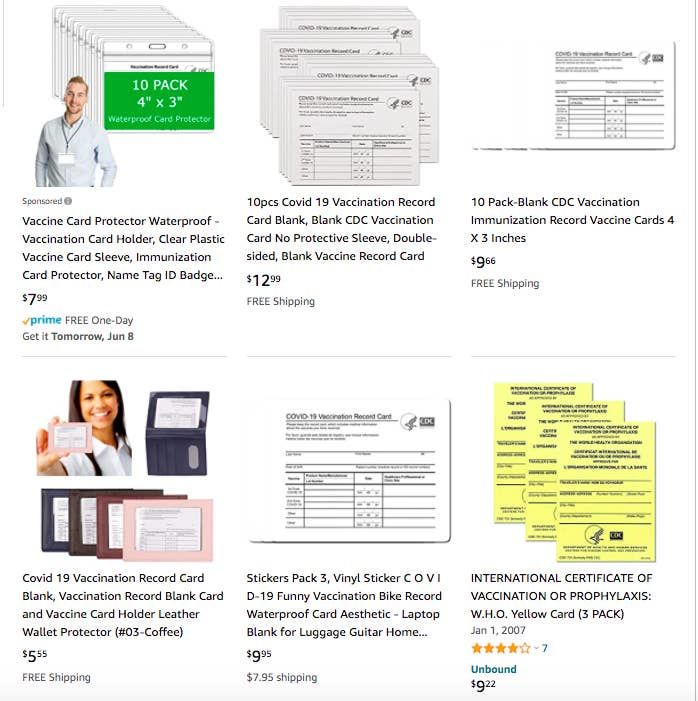 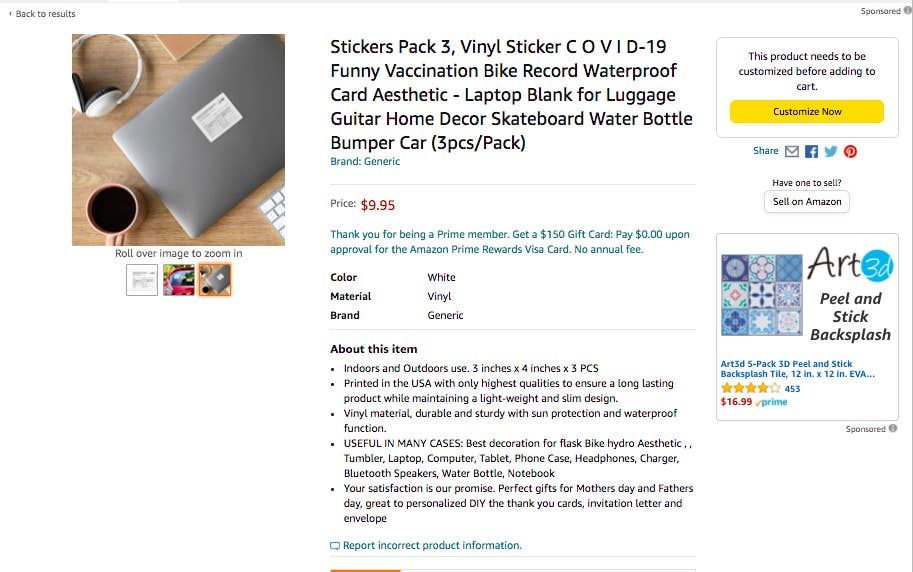 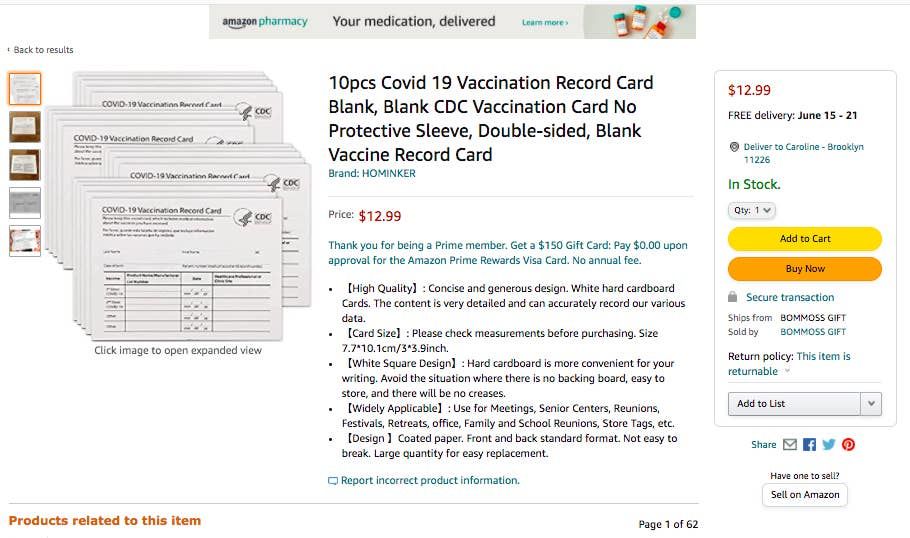