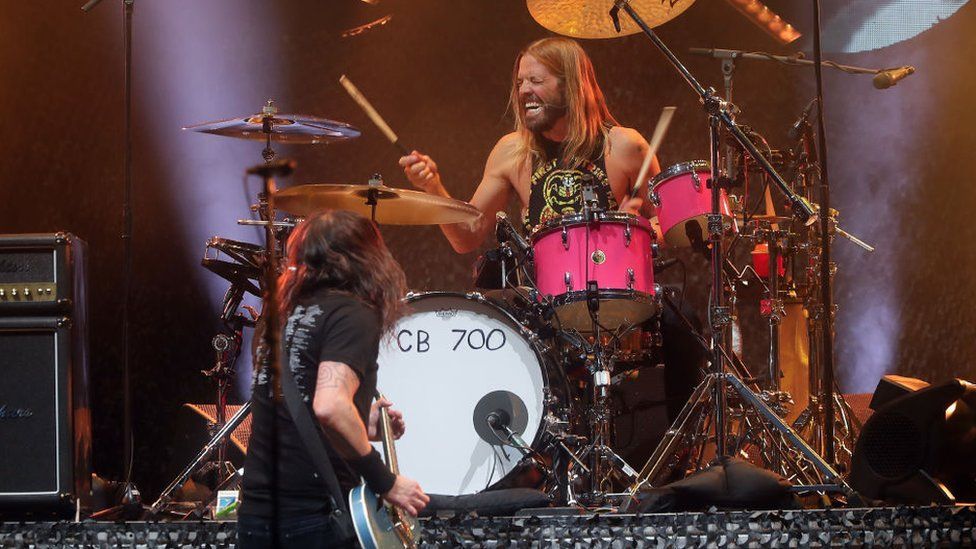 The drummer with US rock group Foo Fighters, Taylor Hawkins, has died aged 50, the band have announced.

The band said they were "devastated by the tragic and untimely loss" in a statement on social media. No cause of death has been given.

Hawkins played with Foo Fighters for more than two decades, joining shortly after they finished making their 1997 album The Colour and the Shape.

The band are currently on tour in South America.

"His musical spirit and infectious laughter will live with us forever," Foo Fighters wrote.

"Our hearts go out to his wife, children, and family, and we ask that their privacy be treated with the utmost respect in this unimaginably difficult time."

Foo Fighters were formed in 1994 by Dave Grohl, after his previous group Nirvana disbanded following the suicide of lead singer Kurt Cobain.

While Grohl drummed for Nirvana, he took on lead vocals and guitar in Foo Fighters, and so Hawkins had the daunting task of drumming in a group founded by one of the most celebrated drummers in rock.

"I was a little nervous at first, but I got over that," he told OC Weekly soon after joining.

"Any instance where you're auditioning for something, you're going to be nervous. But no-one can play better than Dave Grohl. He just has this vision in his head."

The two sometimes swapped roles during the band's concerts, with Hawkins taking on vocals. After news of his death was announced many fans shared clips of him singing Queen's Somebody to Love.

While visiting London in 2001, he took an overdose of heroin and spent two weeks in a coma.

Speaking about the experience in 2018, he said it had been "a real changing point for me".

The band had been due to perform on Friday night at the Estereo Picnic festival in Bogota, Colombia. The US embassy in Bogota expressed its "sincerest condolences" to the drummer's family, friends and fans.

Beatriz De La Pava from BBC Minute was backstage at the festival when the announcement of Taylor Hawkins' death was made to the crowd.

"While we were backstage, I saw the Foo Fighters team was packing up everything," she said.

"The organisers of the festival arrived and then they all went on to the stage after Nile Rodgers had finished and said they had some very sad news to share.

"A message was then published on the big screens that Taylor had died and everyone was silent. A few of the other stages started playing My Hero by the Foo Fighters.

If you're going to play drums for Dave Grohl, one of the best players in the history of rock, you'd better be good. Taylor Hawkins was that good.

He could pulverise the kit on The Pretender, play it like a song on Learn To Fly or add a funky shuffle to a track like Shame Shame. He was more than just Grohl's equal, he was his partner in crime. The star once said Hawkins was "overly qualified" for his band.

He wasn't just the time-keeper. He had writing credits on Grammy-winning hits like Best Of You, Learn To Fly and All My Life; and at almost every Foo Fighters concert, he'd step out from behind the kit and sing a track by his favourite band, Queen.

At his last show, a week ago in Argentina, that song was Somebody To Love.

Born in Texas but raised in California, Hawkins had the affable, easy-going demeanour of a surfer dude. He was introduced to music by his brother and started out playing guitar but, inspired by Roger Taylor of Queen and Stewart Copeland of The Police, he soon switched to drums.

At the age of 10, he sat behind a "rickety-rackety" kit for the first time in his neighbour's garage. "And then," he said, "my life became drums, drums, drums."

He first rose to prominence in Alanis Morissette's touring band and joined Foo Fighters in 1997, after a studio dispute led to the departure of original drummer, William Goldsmith.

Although he was "super-intimidated", he slotted right into the band. In his autobiography, Grohl called their partnership "a kind of love at first sight".

"Upon first meeting, our bond was immediate and we grew closer with every day, every song, every note that we ever played together," he wrote. "We are absolutely meant to be and I am grateful that we found each other in this lifetime."

Hawkins' death at the age of 50 is devastating - for Grohl, his bandmates and his fans, but most of all, his wife Alison and their three children. Rest in beats.

Paying tribute, Tom Morello, of fellow rockers Rage Against the Machine, tweeted: "God bless you Taylor Hawkins. I loved your spirit and your unstoppable rock power. Rest In Peace my friend."

Ozzy Osbourne said Hawkins was "truly a great person and an amazing musician".

Miley Cyrus, who was part of the festival line-up, said she would dedicate her Saturday show to Hawkins.

"My favorite memory of Taylor is dancing round the drum kit while he played this song..." she posted on Instagram, with a picture of the Pretenders song Brass In Pocket.

"Playing it on repeat, imagining us laughing forever."

Kiss member Gene Simmons said he was "shocked and saddened" by the news of Hawkins' death.

Billy Idol shared a picture of Hawkins on Twitter with the words: "So tragic. Rest in peace Taylor."

Other bands paying tribute to the Foo Fighters drummer included the Smashing Pumpkins, Nickelback and the Offspring.