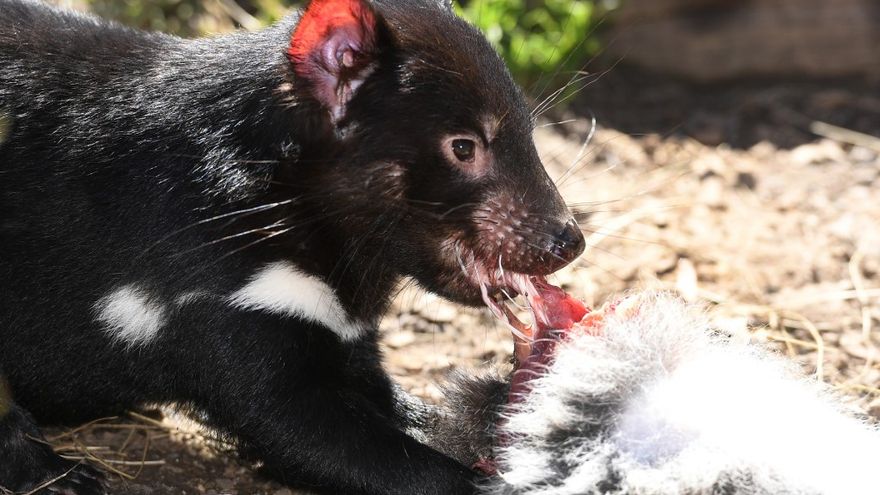 The Tasmanian devils, marsupials disappeared 3,000 years of continental Australia ago, were recently reintroduced into the vast island, a 'historic' step of an ambitious program to protect the species.
The Aussie Ark association revealed on Monday that 26 of these carnivorous mammals were released in a 400-hectare sanctuary in Barrington Tops, three and a half hours north of Sydney (southeast).

Aussie Ark President Tim Faulkner explained that this 'landmark' operation, carried out in July and September, is the first stage of a conservation program to create a preserved population, considering that, on the island of Tasmania, the devil suffers from contagious cancer.

After 16 years of work, which saw the creation of the largest devil breeding program in mainland Australia, it is 'incredible' to have gotten this far, according to Faulkner.

"It's like a dream," he says. The largest indigenous predator on the continent is the spotted-tailed tiger cat that weighs just over a kilo. Bringing an animal of this size is extraordinary.

The devil, who can weigh up to eight kilos, usually hunts other indigenous animals or feeds on the remains of dead animals.

Sarcophilus harrisii is not dangerous to humans or livestock but defends itself, if attacked and can cause serious injury.

This nocturnal marsupial with dark or black fur, which gives off a strong odor when nervous, has been the victim since 1996 of a disease, the transmissible facial tumor of the Tasmanian devil (DFTD), which ends in death in almost 100% of cases.

To date, the disease has wiped out 85% of its population, and has placed this species in danger of extinction.

This contagious cancer, which normally is not, except in certain animal species, is transmitted through bites between devils, very aggressive and with a strong jaw, when they mate or fight.

Animals starve when the tumor reaches their mouths and prevents them from eating.

It is estimated that there are currently 25,000 devils in nature, compared to 150,000 before the outbreak of the disease.

In continental Australia, however, these animals disappeared 3,000 years ago, apparently wiped out by dingoes, a subspecies of native wolves.

The program seeks to create a reserved population against a disease so far incurable, as well as to restore the native natural environment.

Devils are one of the only natural solutions to control populations of foxes and cats, responsible for the vast majority of the 40 extinctions of mammal species in Australia, says Faulkner. The stakes are higher than the Tasmanian devil.

This project recalls that of the reintroduction of the wolf in the American park of Yellowstone in the 1990s, which, according to experts, had a series of positive effects: regeneration of bushes on the banks of rivers, stabilization of water courses, the return of birds and beavers.

The Aussie Ark selected the animals for their reproductive capabilities and released them in a protected sanctuary, to avoid various threats, such as disease or car traffic.

We have introduced young and healthy specimens now, giving them six months to find their marks, establish their territory and prepare for the breeding season that takes place in February, says Faulkner. The land was chosen because it looks like an area in Tasmania.

The devil is one of seven species the Aussie Ark plans to reintroduce to the continent in the coming years, as are the tiger cat, the peramelid (or bandicut) and the petrogale (or rock wallaby).
Add Comment