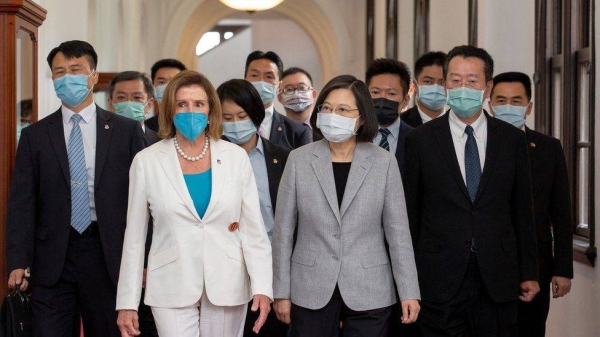 Taiwan 'will not back down' amid China threats, says its president

Taiwanese President Tsai Ing-wen said Wednesday that Taiwan "will not back down" amid military threats from China, after it announced major maneuvers near the island over the visit of US House of Representatives Speaker Nancy Pelosi.
Pelosi said she had come to the region "in peace" and that the United States would honor its pledge to defend the democratic island under threat by Beijing.

"Today, our delegation ... came to Taiwan to say unequivocally that we will not abandon our commitment to Taiwan and that we are proud of our enduring friendship," said Pelosi during a meeting with Tsai in Taipei.

The 82-year-old is the most senior US official to visit the island in more than two decades.

China's ministry of foreign affairs denounced what it called "a serious violation" of US commitments to Beijing, which "seriously undermines regional peace and stability".

Shortly after Pelosi began her visit to the island, over which Beijing claims sovereignty, Taiwan announced the incursion of 21 Chinese military aircraft into its air defense zone on Tuesday.

The jets "entered [Air Defence Identification Zone] in southwestern Taiwan on 2 August 2022," the country's defense ministry said in a statement on Twitter.

Pelosi arrived in Taiwan on Tuesday night despite threats from Beijing of serious consequences, becoming the highest-ranking American official in 25 years to visit the self-ruled island claimed by China.

Pelosi’s visit triggered increased tension between China and the United States. China claims Taiwan as part of its territory, to be annexed by force if necessary, and views visits by foreign government officials as recognition of the island’s sovereignty.

China had warned of “resolute and strong measures” if Pelosi went ahead with the trip. China’s Defense Ministry said on Tuesday night that the country's People's Liberation Army is "on high alert," adding it would conduct a series of targeted military operations to “safeguard national sovereignty” in response to Pelosi’s visit. It vowed to “resolutely thwart external interference and ‘Taiwan independence’ separatist attempts."

The Biden administration did not explicitly urge Pelosi to call off the visit while seeking to assure Beijing it would not signal any change in US policy on Taiwan.

“Some American politicians are playing with fire on the issue of Taiwan," Wang said in a statement. “This will definitely not have a good outcome ... the exposure of America's bullying face again shows it as the world's biggest saboteur of peace."

Pelosi said in a statement just after her arrival that the U.S. delegation’s visit “honors America’s unwavering commitment to supporting Taiwan’s vibrant democracy.”

“Our visit is one of several Congressional delegations to Taiwan -– and it in no way contradicts longstanding United States policy,” she said.

China, which regards Taiwan as a renegade province to be annexed by force if necessary, has repeatedly warned of retaliation for Pelosi's visit, saying its military will “never sit idly by.”

“The US and Taiwan have colluded to make provocations first, and China has only been compelled to act out of self-defense,” Chinese Foreign Ministry spokesperson Hua Chunying told reporters Tuesday in Beijing.

Hua said China has been in constant communication with the US and made clear “how dangerous it would be if the visit actually happens.” Any countermeasures China take will be “justified and necessary" in the face of Washington's “unscrupulous behavior," she said.

Shortly after Pelosi’s arrival, a representative of the Chinese legislature’s Standing Committee issued a statement saying the trip “severely violated” the “One China principle,” which is Beijing’s claim to be the sole government of both mainland China and Taiwan.

The White House on Monday decried Beijing's rhetoric, saying the US has no interest in deepening tensions with China and “will not take the bait or engage in saber rattling.”

White House National Security Council spokesperson John Kirby underscored that the decision on whether to visit Taiwan was ultimately Pelosi’s. He noted that members of Congress have routinely visited the island over the years.

Kirby said administration officials are concerned that Beijing could use the visit as an excuse to take provocative retaliatory steps.

US officials have said the US military would increase its movement of forces and assets in the Indo-Pacific region during Pelosi's visit. Her Asian tour began in Singapore on Monday.

Taiwan and China split in 1949 after the Communists won a civil war on the mainland. The US maintains informal relations and defense ties with Taiwan even as it recognizes Beijing as the government of China.
Add Comment