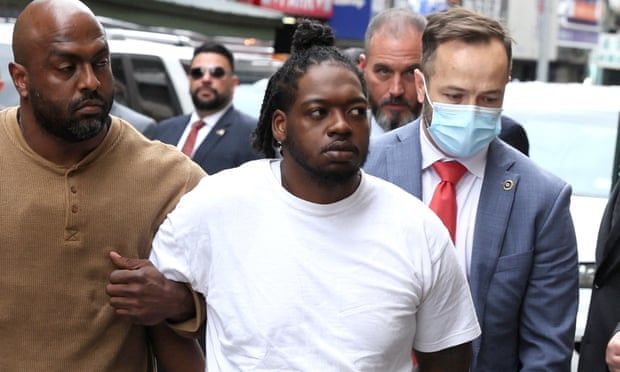 Suspect in New York subway shooting turns himself in to police

Police had tweeted photo of Andrew Abdullah, 25, in connection with killing of Daniel Enriquez on Sunday

A man wanted in an apparently unprovoked fatal shooting on a New York City subway train surrendered to police on Tuesday, hours after authorities posted his name and photo on social media and implored the public to help find him.

Andrew Abdullah, 25, turned himself in at a Manhattan precinct to face charges in the death of 48-year-old Daniel Enriquez.

Enriquez was shot while heading to brunch on Sunday, about six weeks after 10 people were shot in an attack on another subway train. Enriquez’s sister Griselda Vile implored the city to tackle crime more effectively.

Earlier, the police department tweeted a photo of Abdullah, 25, and asked the public for help finding him.

Court records showed Abdullah had two open criminal cases in New York City, one in Brooklyn stemming from a 24 April vehicle theft and the other for an alleged assault in Manhattan in 2020.

Messages seeking comment were left with lawyers representing him in those cases.

Police had asked for the public’s help in identifying the gunman, tweeting surveillance photos of a burly man dressed in a hoodie on a hot day.

“We need all eyes on this,” the NYPD commissioner, Keechant Sewell, said.

Police said witnesses reported the gunman was pacing the last car of a Q train heading from Brooklyn to Manhattan, pulled out a gun and fired at Enriquez at close range. The shooter fled after the train arrived at Canal Street in Manhattan.

Enriquez worked for the global investment research division at Goldman Sachs. A child of Mexican American parents, he spent his early childhood in Brooklyn before his family moved to California and then Seattle, his partner, Adam Pollack, told the New York Post. Vile said both moves were prompted by violence in neighborhoods in New York and California.

Enriquez returned to New York in the mid-1990s to pursue a master’s degree in Latin American studies at New York University. During the pandemic he learned to play guitar and speak Portuguese and Italian, his family and partner said.

“He was constantly in self-improvement mode,” his brother-in-law, Glenn Vile, told Fox News.

The eldest of five children, Enriquez looked out for his siblings and parents, his sister said. Just about an hour before he was killed, Enriquez texted his siblings to advise them to check on their parents, who have health problems, she said.

The seemingly random shooting further shook a city on edge about public safety. Many types of crime have rebounded after dipping dramatically earlier in the pandemic when people were staying home. And concern about crime has soared.

In the first five months of 2022, shootings in the city dropped slightly over the same period a year earlier, and the number of murders is down 12% so far over last year. But New York is still on pace to have its second-highest number of homicides since 2011, after nearly a decade of record lows.

Crime is now voters’ top concern, according to a Quinnipiac University poll. Mayor Eric Adams, a Democrat who campaigned on promises to make the city safer, said his administration will evaluate how it deploys officers across the subway system.

There were no police officers in the train car where Enriquez was shot, Adams said.