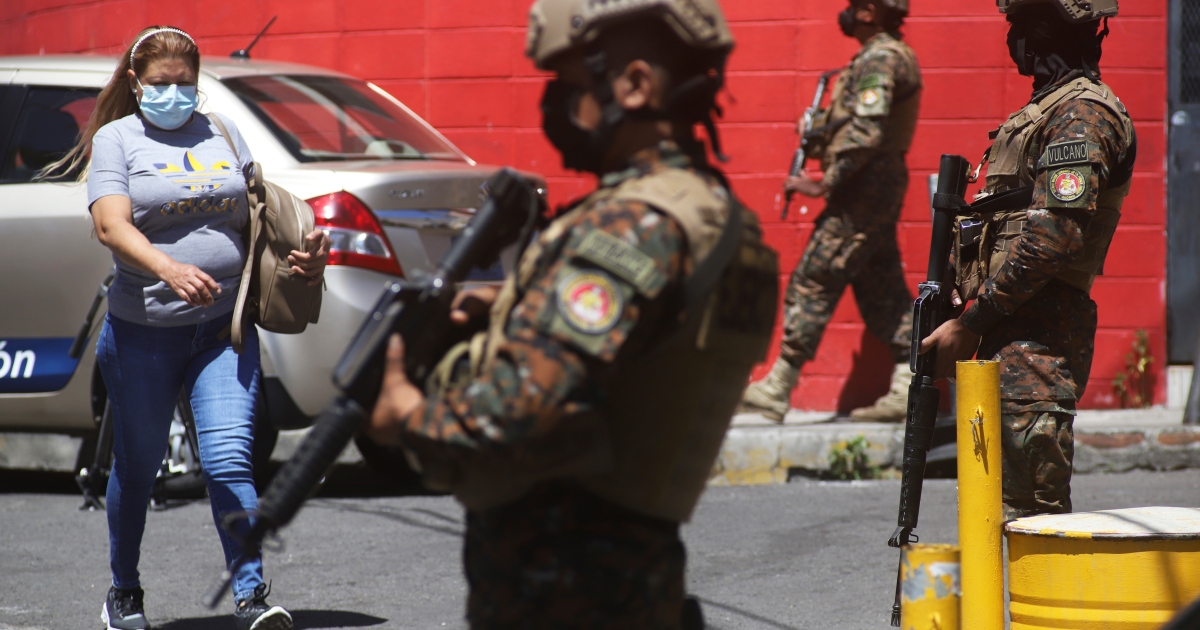 After a spate of weekend murders, experts question whether the government’s ‘iron fist’ approach will stem the violence.

The killings of more than 80 people in El Salvador over the weekend have had a chilling effect on the general population and worried human rights defenders already concerned about the government’s approach to gang violence and its authoritarian streak.

On Saturday alone, 62 people were murdered – the country’s most violent day in 20 years – in a surge of seemingly senseless violence against average Salvadorans that the government has attributed to the MS-13 gang.

The gang is likely aiming to send a message to the government, multiple security experts told Al Jazeera, as part of backdoor negotiations to reduce violence in exchange for privileges that the government vehemently denies are taking place despite mounting evidence.

“It shows the weaknesses of the supposed pact between the government and gangs,” said Jose Miguel Cruz, director of research at Florida International University’s Kimberly Green Latin American and Caribbean Center and an expert on El Salvador’s gangs.

“What’s also clear is that the government does not have complete control of what happens in terms of security. Other actors decide when to exercise violence in total impunity, and in an arbitrary way.”

Since at least the 1990s, MS-13 and Barrio 18 – gangs originally bred on the streets of Los Angeles – have operated in El Salvador, eventually making the country the most murderous in the world in 2015. Homicides have been decreasing in El Salvador since then, when more than 6,600 people were murdered in the country of about 6.5 million people.

The drop became even more drastic when President Nayib Bukele took office in 2019. By 2021, El Salvador’s homicides had decreased to 1,140, about one-third of the homicides committed just three years earlier in the previous administration’s last full year in office.

The results were only comparable to a period years earlier when a truce negotiated between the government and gangs had been reached, so analysts immediately began speculating that Bukele was doing the same.

Still, Bukele insisted that his security plan, known as Plan Control Territorial, was responsible. The plan has never been made public, and the government has only shared vague details about increasing law enforcement and targeting certain municipalities.

A 2020 report by the International Crisis Group analysed homicide data in the areas where the plan was supposedly implemented and found that it did not support the president’s claim that his programme resulted in the drop in killings. In September 2020, Salvadoran investigative media outlet El Faro also revealed that Bukele’s government had negotiated with MS-13 for a reduction in homicides. 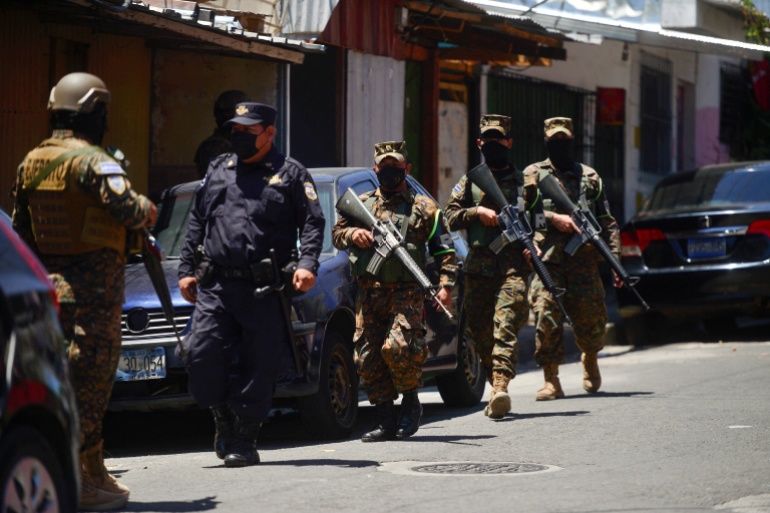 A police officer walks near soldiers during a patrol in San Salvador on March 27, 2022

Bukele continues to deny the existence of any dialogue with gangs. Yet experts say the events over the weekend further point to the existence of negotiations – and show the danger of making under-the-table agreements.

“Whatever arrangement that the government has had with the gangs, or any other criminal group, leaves the population totally unprotected,” said Cruz. “Because there is no guarantee that this is not going to happen again.”

The violence has increased the sense of fear in El Salvador, where the dropping homicide rate meant citizens had started to shed some of the fear instilled by high levels of violence over the years.

“We’re used to some violence, but at a lower level, maybe one or two homicides a day across the country,” said 23-year-old shopkeeper Jose, who asked to be identified just by his first name for security reasons. A murder took place a few blocks from his shop over the weekend. “The situation in the country is really worrying,” he told Al Jazeera.

A 34-year-old mother from eastern El Salvador who asked to remain anonymous for her safety said she was considering keeping her two-year-old son home from daycare for the week as a security measure. “They are going crazy in the streets, and you don’t know who is going to be next,” she said.

But she had to weigh safety precautions against the need to work. “I can’t stop living my daily life,” she told Al Jazeera. 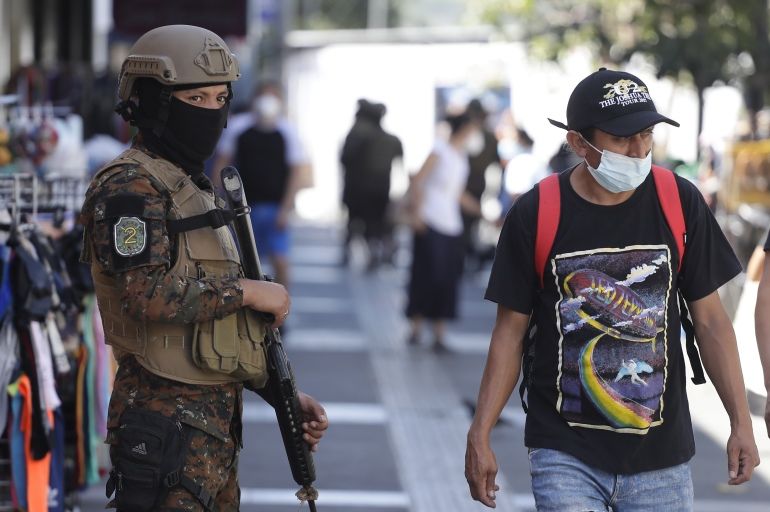 This is the El Salvador that the majority of the country’s population lives in, explained Cruz. “They need to work to survive, exposed to arbitrary and random violence from criminal groups,” he said.

Yet Bukele has tried to sell the image of another El Salvador, particularly to Bitcoin investors who have been drawn to the country by its controversial Bitcoin Law, which went into effect in September 2021 and made the cryptocurrency legal tender.

“There are two El Salvadors,” Cruz said. “It’s part of the contradictions of the reality of the country at this moment.”

In response to this weekend’s violence, El Salvador’s Legislative Assembly approved a “state of exception” in the early hours of Sunday morning.

The government cited “serious disturbances to public order by criminal groups” as the reason for the state of exception, saying it believes the measure is necessary to “contain and reduce the increase in homicides and guarantee peace”.

But rights groups have criticised the move, which suspends certain civil liberties. The order suspends the right to association and right to legal counsel, extends the detention period without charge from 72 hours to 15 days, and allows the government – which rights groups already have accused of using spyware against citizens – to intervene in communications without a warrant.

Abraham Abrego of San Salvador-based human rights group Cristosal said the decision is unconstitutional because the country’s Constitutional Court has already ruled that an increase in homicides is not considered a catastrophe – the threshold needed to declare a state of emergency under Salvadoran law.

The suspension of civil liberties is also unjustifiable under international human rights conventions and is not proportional to the current security situation, Abrego told Al Jazeera.

Bukele has a history of eroding democratic norms and of persecuting his critics online and through government institutions. He has sent troops into the congressional building, used the coronavirus pandemic to arbitrarily detain citizens and taken to social media to harass journalists, civil society, and opposition politicians.

When his party took control of the legislature in May of last year, it immediately moved to remove the attorney general and Constitutional Court judges without following the proper procedure. Now, in a “state of exception” and with democratic norms and human rights protections already eroded, there are few institutions to turn to in the case of abuse of power at this time, said Abrego.

“It’s a grave risk to any person, whether that be from a human rights organisation or even an official who wants to exercise their role, because there is a context of hate and stigmatisation against any person who criticises this kind of measure,” he said.

Bukele’s government did not respond to Al Jazeera’s request for comment on Monday. 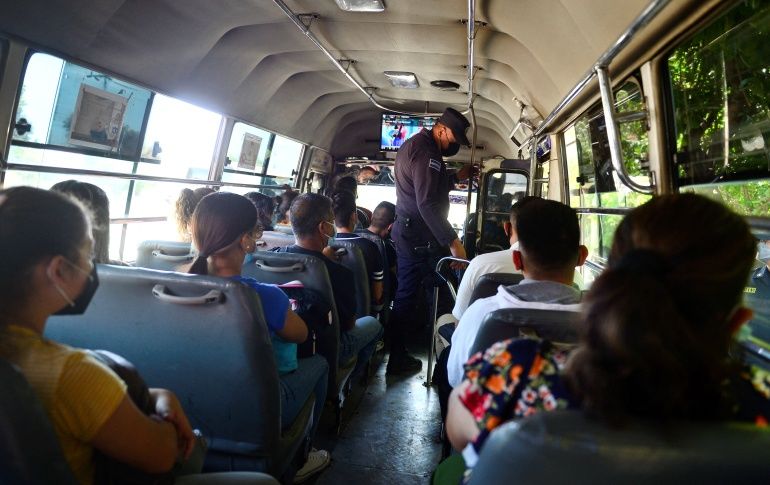 His administration has now enacted harsh security measures in response to the weekend’s violence reminiscent of the “iron fist”, or mano dura, policies of past Salvadoran governments. Bukele sent more police and military into the streets, put more prison restrictions in place, and carried out nearly 600 arrests in a series of raids.

But Cruz, the expert on El Salvador’s gangs, said it was unclear whether these “tactics that we’ve had in a cyclical form since the 1990s – but that are each time even more draconian, brutal and violent” would work in stemming the violence that erupted this weekend.

“What they do is simply perpetuate the interminable cycle of violence and the chronic insecurity,” he said.

Oh ya 61 days ago
The US Goverment will be making deals with MS13 in America soon also with all those who have crossed the Mexican border. Border patrol has caught some but how many have got through with Biden come in and rape and pillage policy
View all comments (1)Add comment