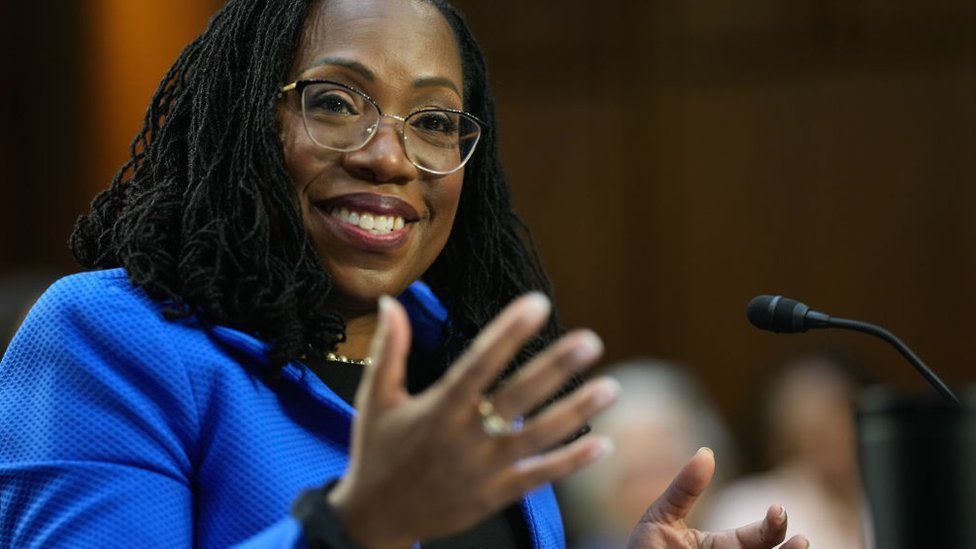 A US Senate panel has deadlocked in a vote to approve President Joe Biden's nominee for the Supreme Court, but she is set to be confirmed anyway later this week.

The nine-member court is currently split between six Republican-appointed justices and three picked by Democrats.

The Senate judiciary committee, which like the full chamber is evenly split between Democrats and Republicans, voted 11-11 on Monday on whether to back her nomination.

A final vote before the 100-member Senate is expected by Friday.

With one other Republican, Senator Susan Collins of Maine, having already said she will vote for the nominee, Judge Jackson's confirmation is assured.

Democrats point out Judge Jackson would become the first former public defender on the court, and cite her experience in nine years on the federal bench.

But many Republicans found fault with her decision during 30 hours of confirmation hearings not to comment on whether seats should be added to the Supreme Court, and her remark that she could not define the term "woman". They also accused her of leniency in child pornography cases.

If confirmed, Judge Jackson, 51, would be the first black woman justice named to the Supreme Court in its 233-year history. She would also be just the third black American to ever sit on the country's top court, following justices Thurgood Marshall and current Justice Clarence Thomas.

The jurist, a Washington DC native, currently sits on the influential US Court of Appeals for the DC circuit.

She has two degrees from Harvard University and once served as editor of the Harvard Law Review.

For any Supreme Court justice nomination, the president chooses his preferred candidate who then faces a vote before the Senate Judiciary Committee before final approval by the Senate.

The court plays a crucial role in US life and is often the final word on highly contentious laws and disputes between states and the federal government.

For the first time since 1991, the judiciary committee has deadlocked on whether to recommend confirmation of a Supreme Court nominee.

Back then, it was Clarence Thomas - mired in allegations of sexual harassment - who failed to win majority support. This time, the dispute is purely ideological. Even Ketanji Brown Jackson's critics laud her character and the ground-breaking nature of her nomination. Their objection is with her judicial philosophy - and the way she would presumably vote on high-profile issues like abortion, religious freedom and civil rights.

While Jackson appears likely to prevail, the manner of her confirmation does not bode well for a process that is becoming increasingly entrenched in partisanship. Only a handful of senators have crossed party lines in recent Supreme Court confirmations - something that was once common.

The one occasion since 1991 that a Supreme Court vacancy has come up when the Senate and the presidency were controlled by different parties, the nominee - Merrick Garland, selected by President Obama in 2016 - was not even allowed a committee hearing.

If Republicans win control of the Senate this year, it appears likely the door will slam shut on any future Biden Supreme Court nominees.