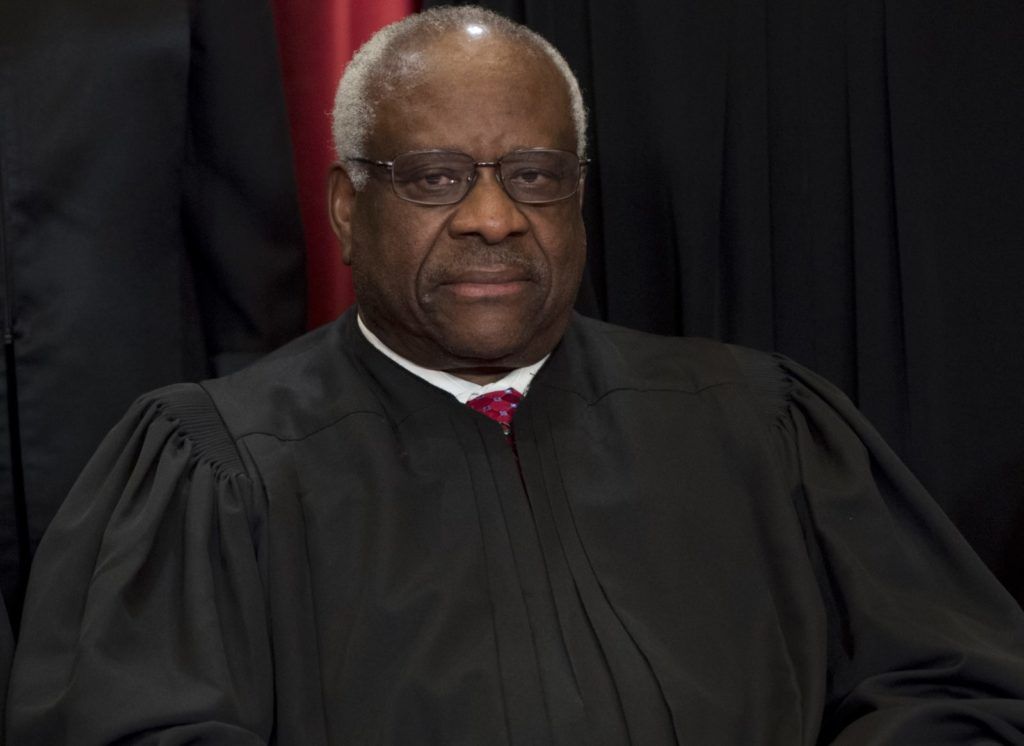 Two Supreme Court justices have suggested that the court needs to “fix” Obergefell v Hodges, the case that made same-sex marriage the law of the land.
In October, the court decided not to hear a case involving Kim Davis, the Kentucky clerk who has been sued for refusing to issue marriage licences to same-sex couples because of her religious beliefs.

The Supreme Court opted not to take the case, leaving in place a decision from a lower court that allowed a lawsuit against Davis to proceed.

However, justices Clarence Thomas and Samuel Alito released a joint statement saying that, while they agreed with the decision not to hear the case, Davis’ legal issues should serve as a “stark reminder of the consequences” the 2015 ruling on same-sex marriage was having on religious liberty.

In their statement, the justices said the Supreme Court had “read a right to same-sex marriage into the Fourteenth Amendment, even though that right is nowhere in the text”.

They said that several members of the court noted the decision would threaten the religious liberty of those who believe that marriage is “a sacred institution between one man and one woman”.

Thomas and Alito went on to argue that same-sex marriage should have been legalised through Congress or by individual states, which could, they suggested, have paved the way for exemptions for people who don’t agree with same-sex marriage.

They hit out at their fellow Supreme Court justices for bypassing the “democratic process” with its 2015 ruling, which resulted in same-sex marriage become a reality across the United States.

The justices said the 2015 ruling had allowed governments, employers and schools to “vilify” those who have religious beliefs, branding them “bigots”.

“Those predictions did not take long to become reality,” they added.

“Kim Davis, a former county clerk in the Commonwealth of Kentucky, was responsible for authorising marriage licences. Davis is also a devout Christian. When she began her tenure as clerk, Davis’ sincerely held religious beliefs – that marriage exists between one man and one woman – corresponded with the definition of marriage under Kentucky law.

“Within weeks of this court granting certiorari in Obergefell, Davis began lobbying for amendments to Kentucky law that would protect the free exercise rights of those who had religious objections to same-sex marriage. But those efforts were cut short by this court’s decision in Obergefell.”

The Supreme Court judges pinned Davis’ plight on Obergefell, saying she “found herself faced with a choice between her religious beliefs and her job”.

“When she chose to follow her faith, and without any statutory protection of her religious beliefs, she was sued almost immediately for violating the constitutional rights of same-sex couples.”

They described Davis as “one of the first victims” of the court’s “cavalier treatment of religion” in its ruling on Obergefell.

“Due to Obergefell, those with sincerely held religious beliefs concerning marriage will find it increasingly difficult to participate in society without running afoul of Obergefell and its effect on other anti-discrimination laws.”

Thomas and Alito went on to argue that the Supreme Court had “forced” same-sex marriage on society “through its creation of atextual constitutional rights” and had left “those with religious objections in the lurch”.

The justices closed out their statement by saying Davis’ case “implicates important questions about the scope of our decision in Obergefell”.

“By choosing to privilege a novel constitutional right over the religious liberty interests explicitly protected in the First Amendment, and by doing so undemocratically ,the court has created a problem that only it can fix.

“Until then, Obergefell will continue to have ‘ruinous consequences for religious liberty’.”

Their statement was released shortly before Amy Coney Barrett was confirmed to the Supreme Court in a devastating blow to LGBT+ people.

The appointment of the anti-LGBT+ Roman Catholic judge has tipped the Supreme Court to leaning heavily conservative, with many queer people afraid that their hard-won rights – such as same-sex marriage – could come under threat as a result.
Add Comment