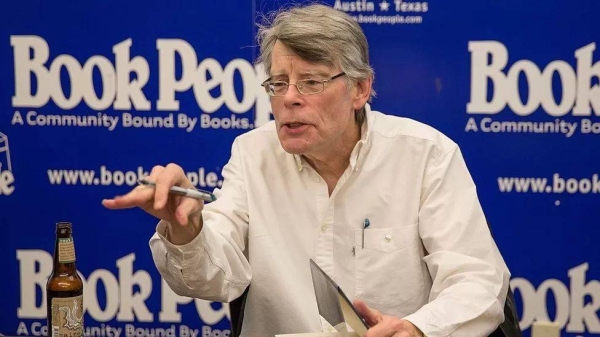 American horror novelist Stephen King is taking on a new monster: corporate consolidation.
The author was the star witness in an anti-trust trial to block the two biggest US publishers' $2.2bn merger.The US Department of Justice called on King to testify about how the proposed tie-up of Penguin Random House and Simon & Schuster could affect authors.

King, 75, told the court in Washington DC that he felt "the move would be bad for competition in the industry".

Both publishing houses have argued the merger would not hinder competition because the companies would continue to bid against each other for the rights to publish novels, even after the transaction is finalised.

King - who has 50 years' experience in publishing - called that idea "a little bit ridiculous".

"You might as well say you're going to have a husband and wife bidding against each other for the same house," the novelist quipped, according to journalists in the court.

Since publishing his first novel, Carrie, in 1974, King has penned more than 70 novels - including other cult classics like The Shining, and It - that have sold over 350m copies.

In the last decade, King has also become more outspoken on social media, interacting with fans and often encouraging his 6.8 million Twitter followers to support local and independent bookstores.

A year later, the justice department sued to block the acquisition. US President Joe Biden's administration has vowed to increase competition as a central part of its economic policy.

"American authors and consumers will pay the price of this anticompetitive merger - lower advances for authors and ultimately fewer books and less variety for consumers," US Attorney General Merrick Garland said following the announcement of the lawsuit.

Attorneys representing the merger have denied these allegations and argue that stopping the transaction "would harm the very authors DOJ purports to protect".

The "DOJ has not found, nor does it allege, that the combination will reduce competition in the sale of books", Daniel Petrocelli, Penguin's lead attorney in the trial, said in a statement.

"We are confident that the robust and competitive landscape that exists will ensure a decision that the acquisition will promote, not harm, competition."