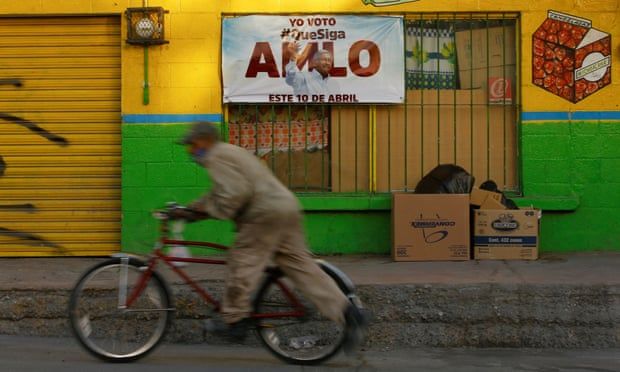 Despite Covid deaths and enduring drug violence, voters look poised to keep president in office in referendum he supports
Maria de Lourdes loves her leader and is desperate for him to stay.

“He’s the best president we’ve had in 70 years,” the retiree enthused this week as she prepared to bombard her phone contacts with calls urging them to back him on Sunday, when Mexico goes to the polls.

Latin America’s second biggest economy is not holding a presidential election, however – the next one is not due until 2024. Rather, voters will be offered a straightforward question in Mexico’s first ever national recall election: should president Andrés Manuel López Obrador have his mandate revoked, or not?

Lourdes, a fervent “Obradista” who regularly posts pro-López Obrador memes on social networks, has no doubt which way she will vote in the ballot which, unusually, was championed by the president himself.

López Obrador, a 68-year-old populist who took power in 2018, has claimed the referendum is a way to hold the executive accountable to the people and prevent government corruption.

De Lourdes agrees. “Now with the recall in place, future presidents will have to think hard before they betray the people,” she said.

Mexico was for many years a de facto one party state, in which the conservative Institutional Revolutionary party (PRI) ruled uninterrupted for more than 70 years until 2000, and then another six between 2012 and 2018.

Combating corruption and ensuring transparency were among the key campaign promises of López Obrador, who is better known as Amlo. But during his three years in office, international anti-corruption organization Transparency.org has documented only a 3% positive change in corruption levels.

Amlo’s approval rating fell for a few weeks in February, after the revelation that his son had rented a mansion in Houston owned by a senior figure at an oil firm that has done business with the Mexican government.

In recent polling, more than half of the Mexican electorate said they believed the vote to be unnecessary.

But hardcore Amlovers – as fanatical supporters of the Mexican president are known – beg to differ.

“If we had been able to do this [recall a president] before, we would have been able to avoid so many tragedies, so many deaths, so many economic failures. Now we’ll have the power to dictate the future of Mexico, us Mexicans – not just the more privileged leadership of before that felt untouchable,” said Karla Reséndez, an Amlover from Nuevo Laredo, Tamaulipas, who works as a rancher.

Amlo’s term has seen its own share of deaths, however: the president has repeatedly been accused of a cavalier response to a pandemic which has taken the lives of about 323,000 Mexicans.

Meanwhile, violence remains at a historic high, and this year, Mexico reached the total of 100,000 people disappeared in the drug war.

But if recent polls are to be trusted, any calls to remove the president this weekend are futile. Amlo’s approval ratings remain high, and a projected 70% of voters will choose to keep him in office.

For the vote to be certified, if he is indeed recalled, turnout must reach 40%. Several other referendums put before the public over the past two years, including one on possible immunity for former presidents, only achieved a 7% turnout.

Though the results of the recall election are unlikely to be surprising, the cost of this procedural vote has reached 1.6bn pesos, roughly $80m – in reality only half of what the government initially asked for.

Reséndez thinks the vote is worth the money, as it could save the country money in the long run. “Before, the government bailed out private banks and put us into a lot of debt. Now we will have a chance to evaluate the performance of the government and prevent it from happening again.”

Support for the president is so ironclad, some opposition groups have even urged supporters to vote “continue” or not vote at all, and wait to unseat Amlo in 2024.

“You finish [the term], then you leave!” a sign at an anti-Amlo rally read last week.
#Covid
Add Comment