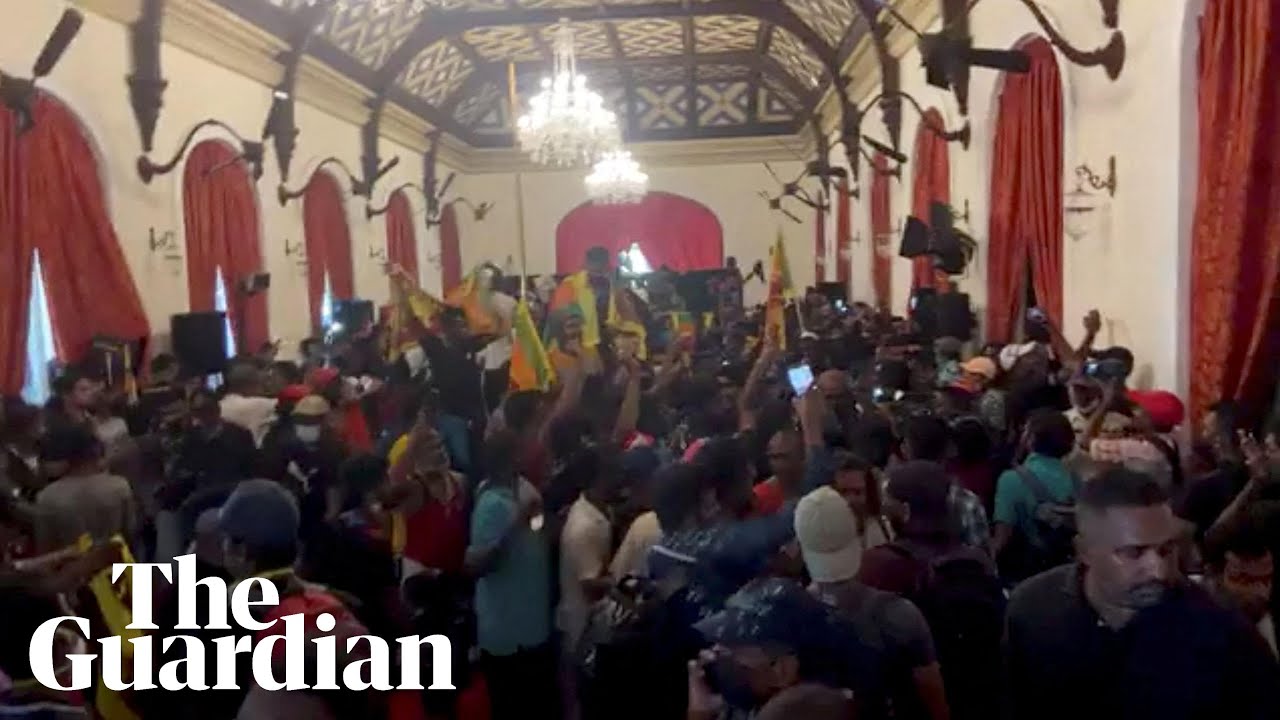 Beleaguered Gotabaya Rajapaksa says he will step down on 13 July, following turmoil in Colombo

The Sri Lankan president, Gotabaya Rajapaksa, has agreed to resign after a dramatic day during which his house and offices were stormed by protesters and the home of the prime minister set on fire.

In a late-night message conveyed through the parliamentary speaker, Mahinda Yapa, the beleaguered president said he would step down from power on 13 July to “ensure a peaceful transition of power”.

It was an historic victory for the protesters who have been calling for him to resign for months and gathered on the streets of Colombo in their tens of thousands on Saturday, as the country continues to struggle through its worst economic crisis since independence.

Ealier prime minister, Ranil Wickremesinghe, had told a meeting of party leaders that he too would resign as soon as a new all-party government was formed.

In extraordinary scenes on Saturday, protesters broke through police barriers and charged into the president’s official residence. Images and witness accounts showed people flooding up the grand staircase of the colonial-era building, with chants calling for the president to go.

As protesters poured into the bedrooms and kitchen and rifled through the president’s possessions, many took full advantage of the president’s luxury amenities which had been denied to them in recent weeks due to rampant food and fuel shortages. Protesters were seen cooking up curries in the kitchen, lying down on beds and sofas, lifting weights and jogging in his private gym and jumping into the outdoor pool.

The president was not at home, having fled the night before under military protection, and he remained in hiding as Saturday’s events unfolded.

Rajith, 50, said he had come to take part in the protests as he had two young children and “there’s no food to eat”. He spoke of his shock at entering the president’s home and seeing that, while Sri Lankans were suffering, “they didn’t lack anything. We saw their luxury rooms, their AC, their cooking gas. They even have so many pedigree pets.”

Dhanu was also among those who stormed into the president’s residence, having cycled for more than six hours from the city of Galle to attend the protest. “I came because there’s something terribly wrong happening here,” she said. “I saw at the president’s house how he enjoyed his life using taxpayers’ money and now he is hiding like a coward dog. The president has fled because he’s a thief.”

Much of the anger and blame for Sri Lanka’s economic crisis has been directed at the president and the Rajapaksa family, who are Sri Lanka’s most powerful political dynasty and held the positions of president, prime minister, finance minister and several other senior cabinet posts in the government.

The Rajapaksas, who pushed a fiercely ultranationalist agenda, are accused of corruption, mismanaging the economy and pushing the nation to bankruptcy. Since March, there have been widespread protests calling for the Rajapaksas, in particular the president, to be removed from power and held accountable for the dire economic circumstances the country’s 22 million people are now grappling with.

Rajapaksa, a former military man who was accused of war crimes when he was defence secretary, had refused to step down for months, and was the last Rajapaksa left standing. His resignation next week will mark the end of a two-decade hold that the Rajapaksa family have had over Sri Lankan politics.

On Saturday evening, the mood on Colombo’s streets turned tense as protesters breached security barriers and set alight the house of Wickremesinghe, who was appointed as a caretaker prime minister after Mahinda Rajapaksa, the president’s older brother and a former president, was forced to step down in May. He had also been facing calls to resign over allegations that he was propping up the Rajapaksa regime.

The arson attack followed an hours-long standoff between protesters and police outside Wickremesigne’s house, with police firing several rounds of teargas into the crowds. Several journalists were violently beaten by police and taken to hospital, prompting a statement from Amnesty International South Asia condemning the “shocking assault”, which was “gravely concerning and blatantly violates press freedom”.

Despite fuel shortages, tens of thousands of people travelled into the centre of Colombo on Saturday morning, many commandeering trucks and buses, to attend what became the biggest protest yet against the president. As the crowds swelled and pushed against the barriers, police began firing teargas.

But they failed to hold back the angry protesters, who moved towards the president’s home, first breaking down police barriers, and then storming into the palatial property, many carrying Sri Lankan flags and shouting slogans.

The president’s office in the Galle Face neighbourhood of Colombo was also taken over by thousands of protesters, who breached the security and barricades and stormed the building, with celebrations continuing inside into the early hours of the morning. For months Galle Face has been the site of an anti-government protest camp, where people have been living in tents and refusing to move until Rajapaksa resigns.

Ruki Fernando, an activist, said he had travelled almost 100 miles from the city of Kandy to be at the Colombo protest. On the way he had seen people walking along highways, clutching on to the back of cargo trucks, crushed into lorries and on bicycles, in order to get to the protest despite the lack of transport due to the fuel crisis.

“I have never experienced such a widespread people’s uprising,” said Fernando. “There was such a sense of achievement when people entered the president’s house, and his secretariat. These are all places maintained in luxury by people’s money at a time when the government claims that there isn’t enough money to give medicine, to give food, to give fuel. It’s very politically significant they have been reclaimed by the public.”

At least 40 people, including several officers, were injured and hospitalised in Saturday’s protests.

Sri Lanka is continuing to struggle through a devastating crisis in which the economy has completely collapsed and the government is unable to afford to import food, fuel and medicines.

All sales of petrol have been suspended, schools have shut and medical procedures and surgeries are being delayed or cancelled over a shortage of drugs and equipment, with the UN recently warning that the country is facing a humanitarian crisis.

Inflation is a record-breaking 54.6% and food prices have gone up fivefold, meaning two-thirds of the country are struggling to feed themselves. Sri Lanka defaulted on its foreign debts in May, which total over $51bn, and is in negotiations with the International Monetary Fund for a $3bn bailout.