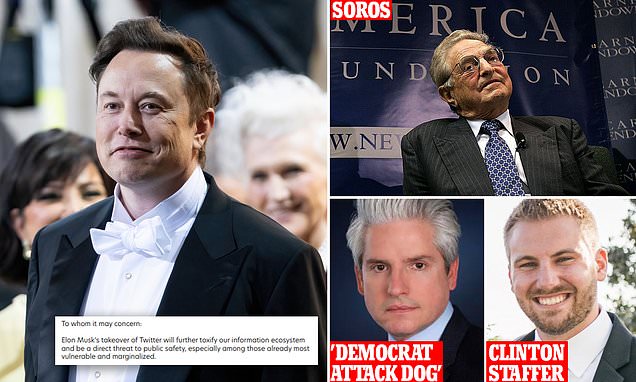 Elon Musk on Tuesday demanded more information about the funding of 26 groups who signed a letter to Twitter advertisers, warning that Musk threatens to turn Twitter into a 'cesspool'.

Some of the most high-profile liberal figures have joined together to encourage advertisers to boycott Twitter if Elon Musk brings in his promised policy of unfettered 'free speech.'

Musk himself responded to the letter asking who funded them: the answer being an assortment of 'dark money groups' like George Soros's Open Society Foundation; NGOs founded by former Clinton and Obama administration staffers; wealthy Democrat donors and their family foundations; labor unions; and the governments of European nations.

'Elon Musk's takeover of Twitter will further toxify our information ecosystem and be a direct threat to public safety, especially among those already most vulnerable and marginalized,' they wrote.

They warned that advertising on Twitter would see their company 'risks association with a platform amplifying hate, extremism, health misinformation, and conspiracy theorists.'

The authors continued: 'Under Musk's management, Twitter risks becoming a cesspool of misinformation, with your brand attached, polluting our information ecosystem in a time where trust in institutions and news media is already at an all-time low.

'Your ad dollars can either fund Musk's vanity project or hold him to account. We call on you to demand Musk uphold these basic standards of community trust and safety, and to pull your advertising spending from Twitter if they are not.' 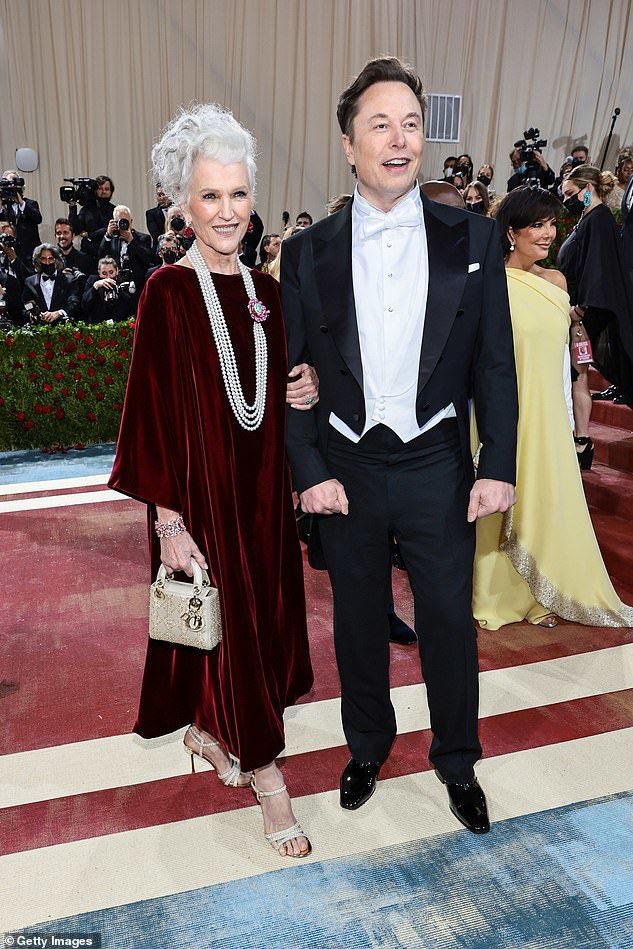 Elon Musk, pictured on Monday night at the Met Gala with his mother Maye, on Tuesday questioned who was funding the groups which signed a letter criticizing him 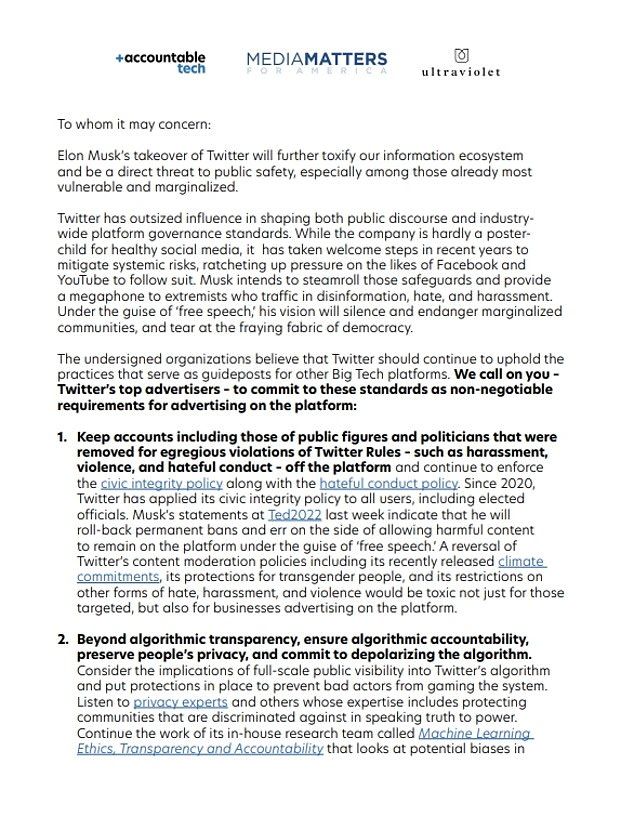 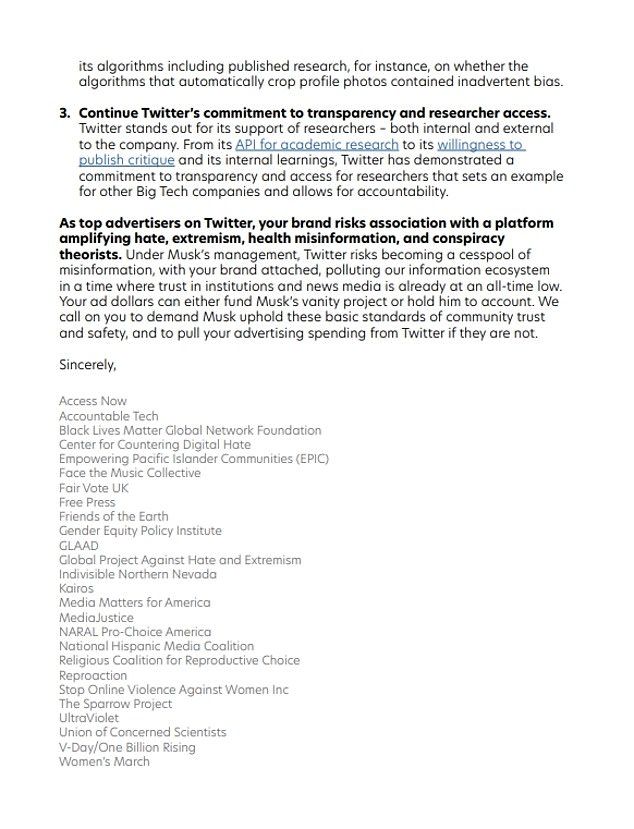 Musk, in response to the letter, tweeted: 'Who funds these organizations that want to control your access to information? Let's investigate …'

Piqued by the critique, he added: 'Sunlight is the best disinfectant.'

The letter signed by the 26 groups was sent on headed paper bearing the logos of Accountable Tech, Media Matters for America, and Ultraviolet.

Accountable Tech is a Washington DC-based group led by Nicole Gill, a political campaigner and founder of the 2017 Tax March, and Jesse Lehrich, a former foreign policy spokesman for Hillary Clinton's campaign and the nephew of David Axelrod, former senior adviser to Barack Obama.

'Social media giants are eroding our consensus reality and pushing democracy to the brink,' they state on their website.

'Accountable Tech is fighting back.'

Media Matters for America was begun in May 2004 by David Brock - a former conservative journalist who turned liberal, and in 2017 was described by Politico as the 'Democrats' attack dog'.

'The Clinton enforcer, who raised tens of millions of dollars and created a far-reaching web of outside groups to push her presidential candidacy, is now training his sights on Trump,' they wrote at the time.

'Brock is rallying Democratic megadonors behind his cause and while he can be controversial at times, few bet against his efforts. His tentacles are far-reaching, including his media monitoring nonprofit Media Matters and the opposition research super PAC American Bridge.'

Media Matters for America says it is 'dedicated to comprehensively monitoring, analyzing, and correcting conservative misinformation in the U.S. media.' 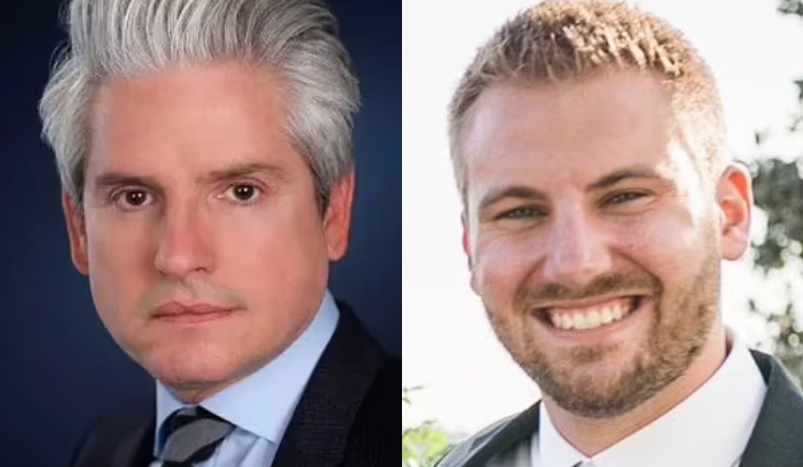 David Brock, founder of Media Matters for America, was described by Politico as 'Democrats' attack dog' (left) and Jesse Lehrich, co-founder of Accountable Tech. Both groups signed the letter warning advertisers against continuing to advertise on Twitter

According to Influence Watch, the group was founded with about $2 million in donations from prominent liberal donors, such as Susie Tompkins Buell, the 78-year-old co-founder of clothing brands Esprit and The North Face; Leo Hindery, 74, a private equity investor specializing in media; and James Hormel, who died in August aged 88.

Hormel was heir to a meatpacking fortune, and the first openly gay man to represent the United States as an ambassador - to Luxembourg, from 1997. He also co-founded in 1981 the Human Rights Campaign - the nation's preeminent gay rights group.

Media Matters is funded by a coalition of donors, including the National Education Association - America's largest union, representing teachers and other school staff - and several Jewish groups, such as the Combined Jewish Philanthropies of Greater Boston and Community Foundation of the United Jewish Federation of San Diego.

UltraViolet is the newest of the trio, founded in 2012.

'UltraViolet is a powerful and rapidly growing community of people mobilized to fight sexism and create a more inclusive world that accurately represents all women, from politics and government to media and pop culture,' they state on their website.

'We founded UltraViolet on the principle that with a combination of organizing, technology, creative campaigning, and people power, we can win. Ultraviolet leads creative, breakthrough campaigns that have won victories from politics to culture.'

Musk is famously anti-union, and has been excluded from White House electric vehicle manufacturing events due to the fact that Tesla's workforce is not unionized.

NoVo works to help marginalized and oppressed groups in society.

It is also supported by one of the many Pritzker family's foundations, Libra.

The Chicago-based billionaires are members of one of America's richest families who made their money largely through the Hyatt hotel chain.

Nicholas Pritzker, 76, and his wife Susan founded the Libra Foundation in 2002, and the organization now 'supports frontline organizations building a world where communities of color thrive.' 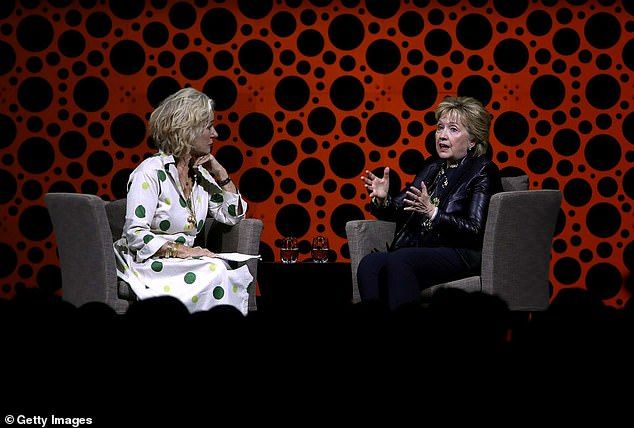 Hillary Clinton is pictured in conversation with Susie Tompkins Buell in March 2017. Tompkins Buell's foundation donates to multiple progressive causes, with a focus on women's rights and the environment

Not all of the 26 groups that signed the letter are U.S. based.

Fair Vote UK, a British group that works to 'tackle the issue of data misuse, voter manipulation and lack of transparency in elections', is among the signatories.

A small-scale group, they declare all donations over £500 ($624), and only confirm five such donations on their site.

Another British-based signatory was the Center for Countering Digital Hate, led by a former advisor to senior figures in the Labour Party, Imran Ahmed.

The group has expanded to have an office in Washington DC, but their work is largely British.

'The Center is best known for working with Rachel Riley to remove controversial far-right commentator Katie Hopkins from Twitter and conspiracy theorist David Icke from Facebook and Youtube,' according to Influence Watch. 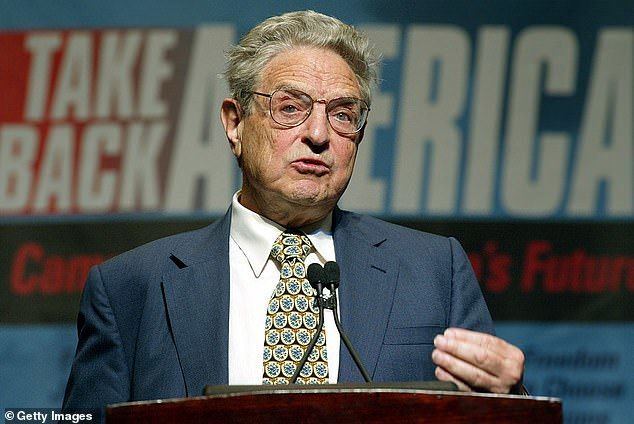 George Soros, the founder and chair of Open Society Foundation, is pictured in June 2004. Soros, now 91, heads a foundation that since 1979 has donated more the $12 billion to progressive causes 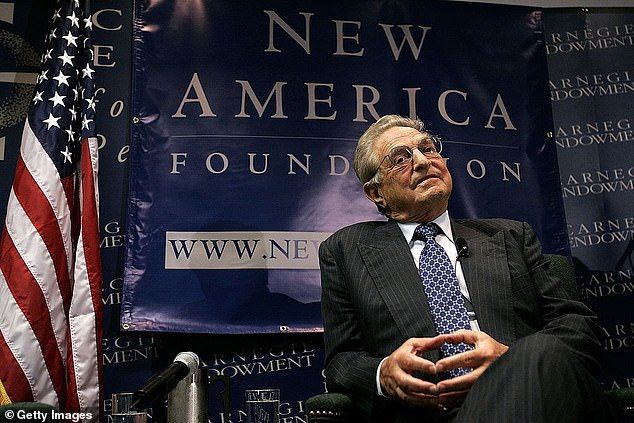 Soros is pictured in September 2006 in Washington DC

European governments are strongly involved in backing another of the signatories - Access Now.

Begun during the 2009 Iranian election, as an activist group to organize and protest election fraud and report on human rights abuses, the group is now global with offices worldwide.

Their largest donor, according to their latest report, is the Swedish government's development agency, Sida, followed by Soros' Open Society Foundations.

The governments of Denmark, Germany and the Netherlands have contributed large amounts, as well as Canada's government.

Oh ya 280 days ago
Elon is over the target. The libtards are scared shitless. Fun to watch them squirm
View all comments (1)Add comment